When Meisha Hunter first saw the small Upper West Side apartment that would eventually become her home, it wasn't in the best condition. "It looked like someone hadn't lived there for a while," she explains, noting that the walls were spray painted gray, and the only source of light came from opening the dilapidated refrigerator door. But still, there was something about the apartment, located in a co-op that was built in the 1920s, that she found appealing. “This place has got good bones," she recalls thinking at the time. "I can work with this."

And work she did: Over a period of a few months, Hunter, a senior preservationist with Li/Saltzman Architects, transformed the dated, run-down apartment into a tranquil sanctuary, one that she's filled with plenty of personal touches—gifts from friends, or souvenirs and photos from her many travels across the globe, including a nearly year-long stint living in Italy—as well as space-saving items.

It's not a micro apartment, but it's close, and when she moved into the place, a friend told her that to make it work, "everything has to have two purposes." So the couch in the living room is also a futon where guests can sleep; the island in the small kitchen is a not just an extra surface, but also a place to store appliances. Even the litter box used by Hunter's 15-year-old Devon Rex cat, Percy, isn't simply a litter box; it's in a console that also functions as a side table. 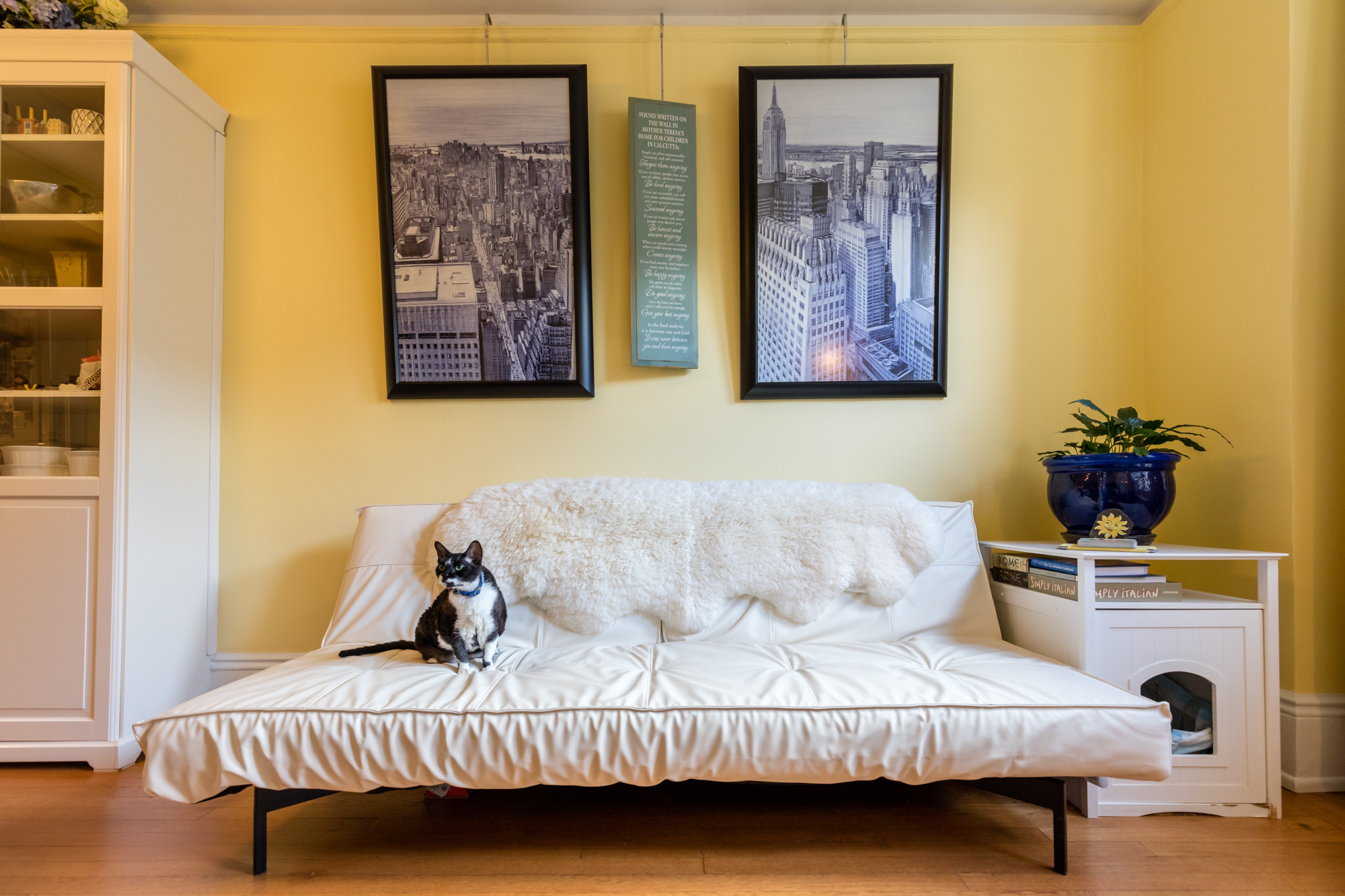 Before this, Hunter lived in an apartment in New Jersey that was perhaps twice the size, but found the commute from there to Manhattan to be untenable. But for her, downsizing to a cozy one-bedroom wasn't that difficult of a transition. "For a couple of months I lived out of two suitcases, and when you start doing that, it’s like, oh, this is pretty Zen," she explains. "You don’t need that much stuff."

The larger task was figuring out how, exactly, to make the most of that small space. Hunter says she consulted her friend Roxanne Ryce-Paul, an architect who also has experience with micro-living, who explained that creating a home from a small space "is like a puzzle, and you try to put the pieces together." Hunter enlisted the help of Michael Daryani, a general contractor from S.M. Zako, and together they worked to assemble the puzzle that is her 475-square-foot apartment.

The kitchen, for example, is wee but functional, with smaller appliances—a two-burner cooktop, and a combination microwave-convection oven—that are better-performing than the ones that typically come standard with a New York apartment. "My husband and I cook at home a lot, so the kitchen was really important to us," Hunter explains, and the care they've put into it shines through.

Similarly, the bedroom was just as important to Hunter, who says that the space is her favorite part of the apartment. "I wanted it to feel like a little suite," she explains, calling the vibe there "peaceful." Much of the storage in the bedroom—save for an Ikea shelving system that's all but ubiquitous in New York apartments—is hidden, either under the bed or in the closet; custom curtains and a traditional bed set, all in soothing neutral shades, add to the tranquil feeling.

When it came to decorating the space, Hunter says there isn't necessarily a guiding aesthetic that ties the whole place together. "My taste is not so modern," she explains. "Part of [my style] is traditional, part of it is eclectic." But one consistent theme throughout is the inclusion of mementos—photographs, prints, or tchotchkes—that were either gifts from friends or come from Hunter's years of traveling to locales as varied as Venice, Marrakesh, and Saskatchewan (she's originally from Canada). The Flatiron Building also makes several appearances, thanks in part to Hunter's work for the NYC Landmarks Preservation Commission, where that particular landmark was one of her pet projects.

But the defining feature, if there is one, is a sense of coziness throughout—something that's hard to come by in tiny New York apartments. "I wanted it to feel light and airy," Hunter says. 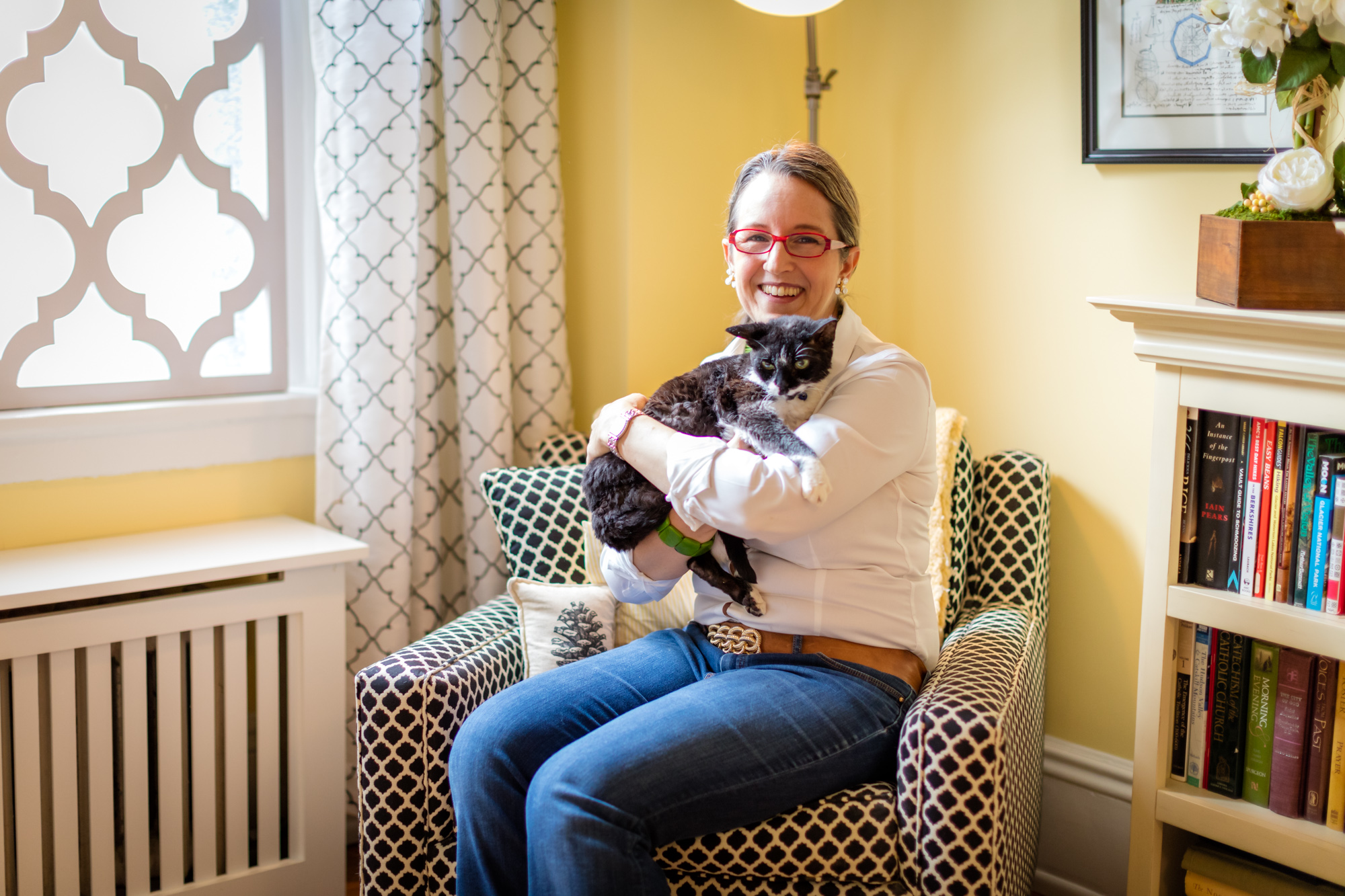 Consider that mission accomplished. And even though she was slightly skeptical about the place at first, in the nearly seven years she's lived in the apartment—during which time she met and married her husband, who moved into the space alongside Hunter and Percy—it's become home. And now, Hunter says, "I'm a huge advocate for small."