Victoria Fine and Jon Vidar are two New Yorkers who take the tiny-living trend to a whole other level: The couple moved aboard their 200-square-foot sailboat, the Scallywag, in October of last year, and plan to live aboard the 40-year-old vessel indefinitely. "We are converts to the lifestyle," says Fine, who, along with Vidar, works in digital strategy in New York City. (Yes, they commute to the city for work—a ferry to Lower Manhattan stops just steps from their boat.)

Fine and Vidar met, in part, because both love to travel and have adventurous spirits—their travels have taken them to places like Myanmar, Iraq, and Israel. "We've spent the majority of our relationship traveling together instead of living in the same place," Fine explains. "We weren't really interested in committing to one location yet." When the pair was looking to put down roots (of a sort) they decided to look for something a bit more mobile instead. "When you're afraid of committing to a location, getting a boat is a great option," Vidar says with a laugh.

The duo bought the boat, named the Scallywag, while they were still living in Los Angeles, even using it as the setting for their engagement photos (which you can see below). They didn't know how to sail when they bought it, but the duo got lucky: the Scallywag's previous owner, Marty, helped them get their sea legs, and has since become a close friend. "He told us, 'The boat comes with lessons,'" Fine explains. "He sold us the boat, and over the next two months, he taught us how to sail it." (The boat's original owner, who the couple have also become close with, wrote a book about the care and upkeep of the Scallywag; the duo now has several copies aboard.) 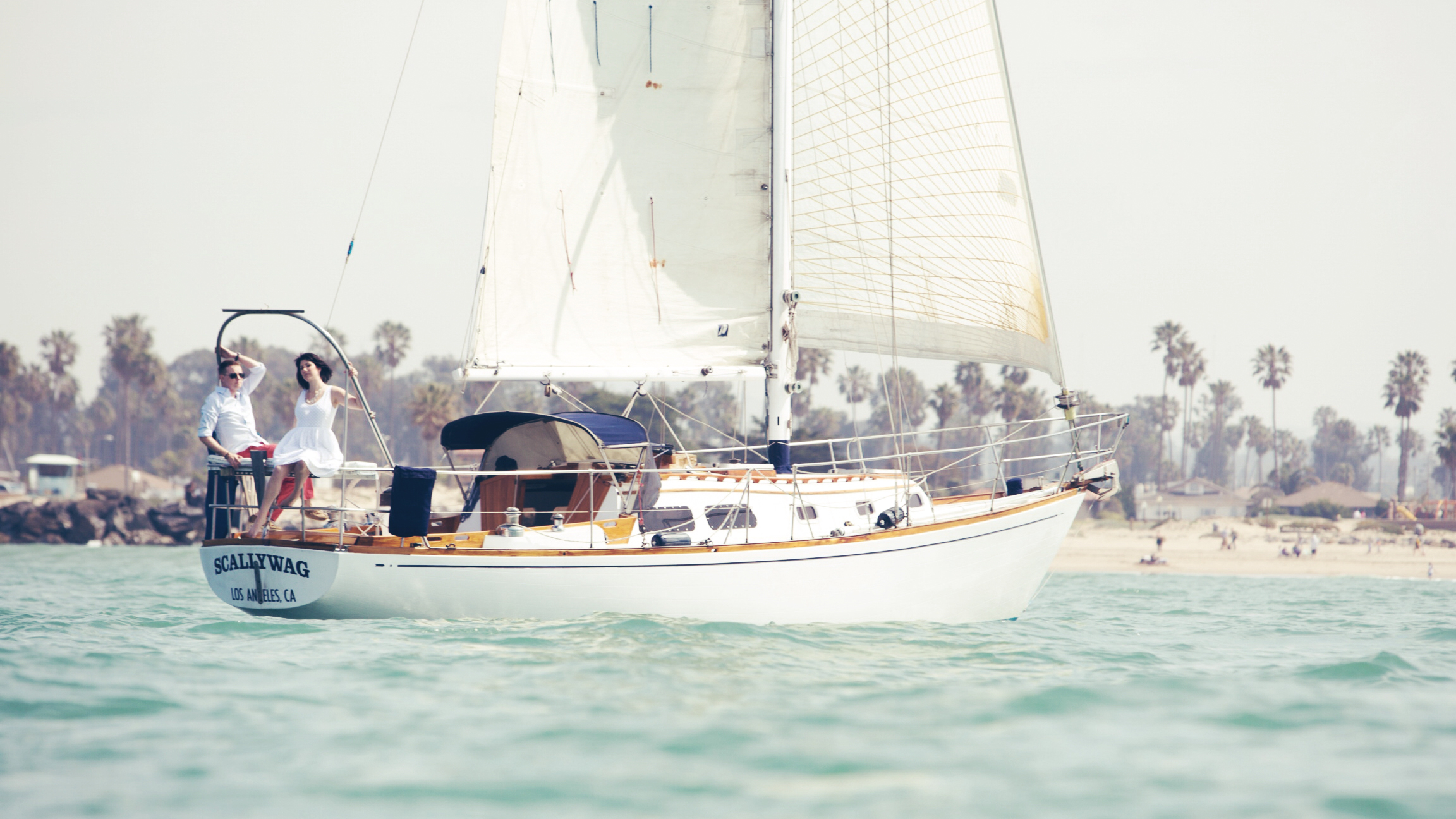 When they decided to move to New York City, the boat came along, too: they trucked it across the country and for their first year here, kept it docked at a marina in the Long Island Sound. "We came to New York and wanted to do the 'New York thing,' so we got a nice two-bedroom apartment with outdoor space in Nolita," Vidar remembers. But they still spent weekends aboard the Scallywag (even blogging from and about the vessel), and when their apartment lease became untenably high, making the boat their full-time home seemed like a logical next step. "We were like, 'We're not going to renew the lease, and we already have the boat, so let's move onto the boat full-time,'" says Vidar. The cost of docking in their marina, located outside of Jersey City: just $360 per month.

But make no mistake: they didn't decide to move on the boat to save money. "The flip side to the cheap rent is that you're constantly working on your boat," Fine says. "You do not save on time and you do not save on money by living on a boat. You really have to enjoy living on a boat and enjoy the work that goes with it and have the time to do it…you're going to be really bummed otherwise." 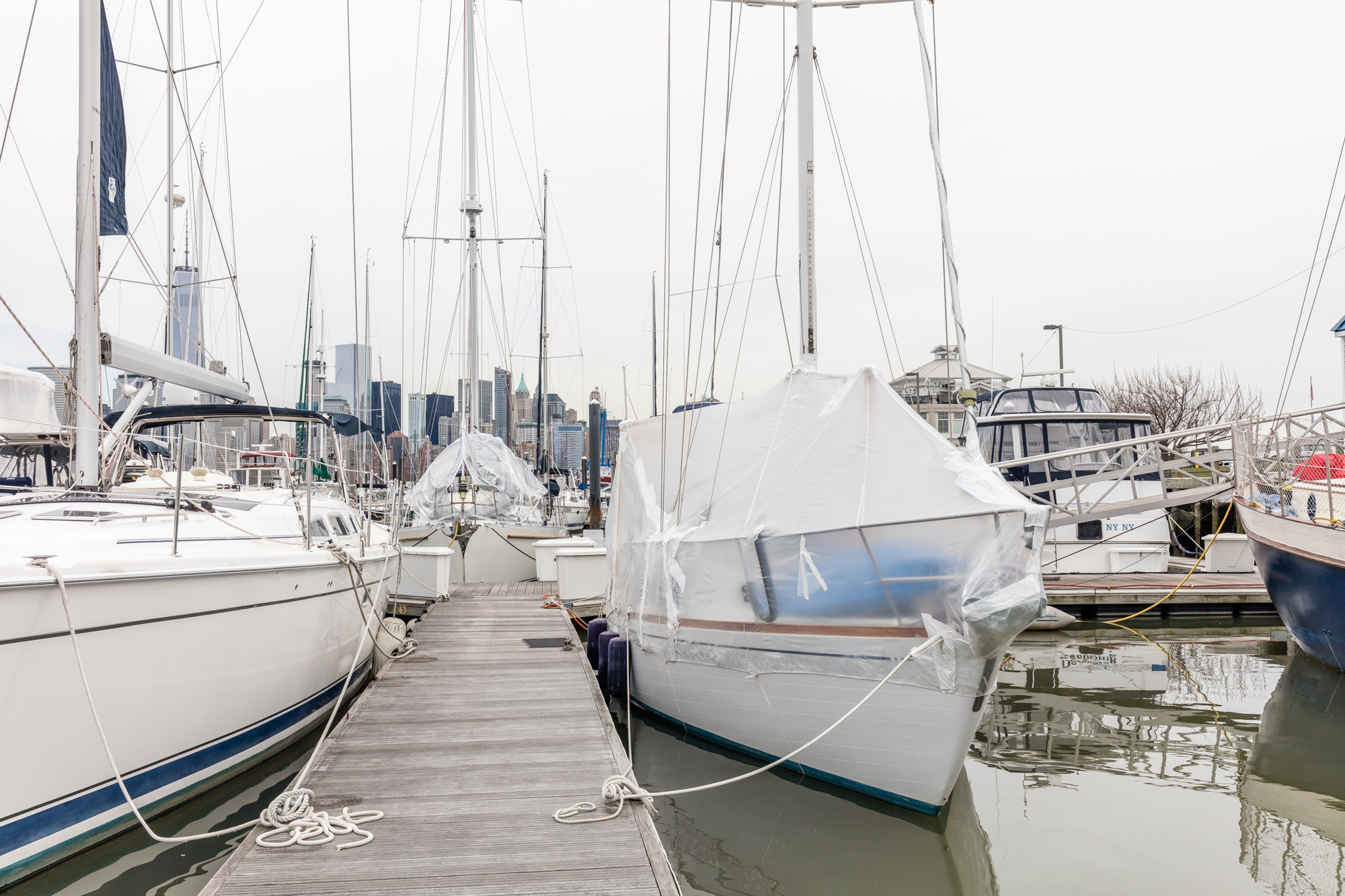 For Fine and Vidar, there have been some adjustments with boat living, although the lack of space has, surprisingly, not been one of them. When they first moved from Los Angeles to NYC, they downsized from an 1,100-square-foot place to, well, a New York City apartment—so they'd already culled quite a few of their belongings when it came time to make the Scallywag their home. "Moving to New York was a lot harder than moving onto the boat," Fine says with a laugh. They sold a lot of their furniture and put many of their must-keep items—heirlooms, wedding gifts, seasonal clothing, and the like—into storage, and moved aboard with a mattress, some keepsakes, and plenty of functional, multi-purpose items.

"Everything on a boat is designed in a way that I'm like, why isn't it like that in every apartment?"

"Everything is built for a purpose—everything on a boat is designed in a way that I'm like, 'Why isn't it like that in every apartment in New York?'," Vidar explains. There are handles throughout the boat that allow for movement even in the rockiest of seas, and there's storage everywhere—behind and underneath the benches, in drawers throughout the space, and even a small closet across from the bathroom. Vidar also used his considerable skills as a handyman to outfit the boat with a few other purpose-built items, including the table in the living space, which unfolds to accommodate larger dinner parties. 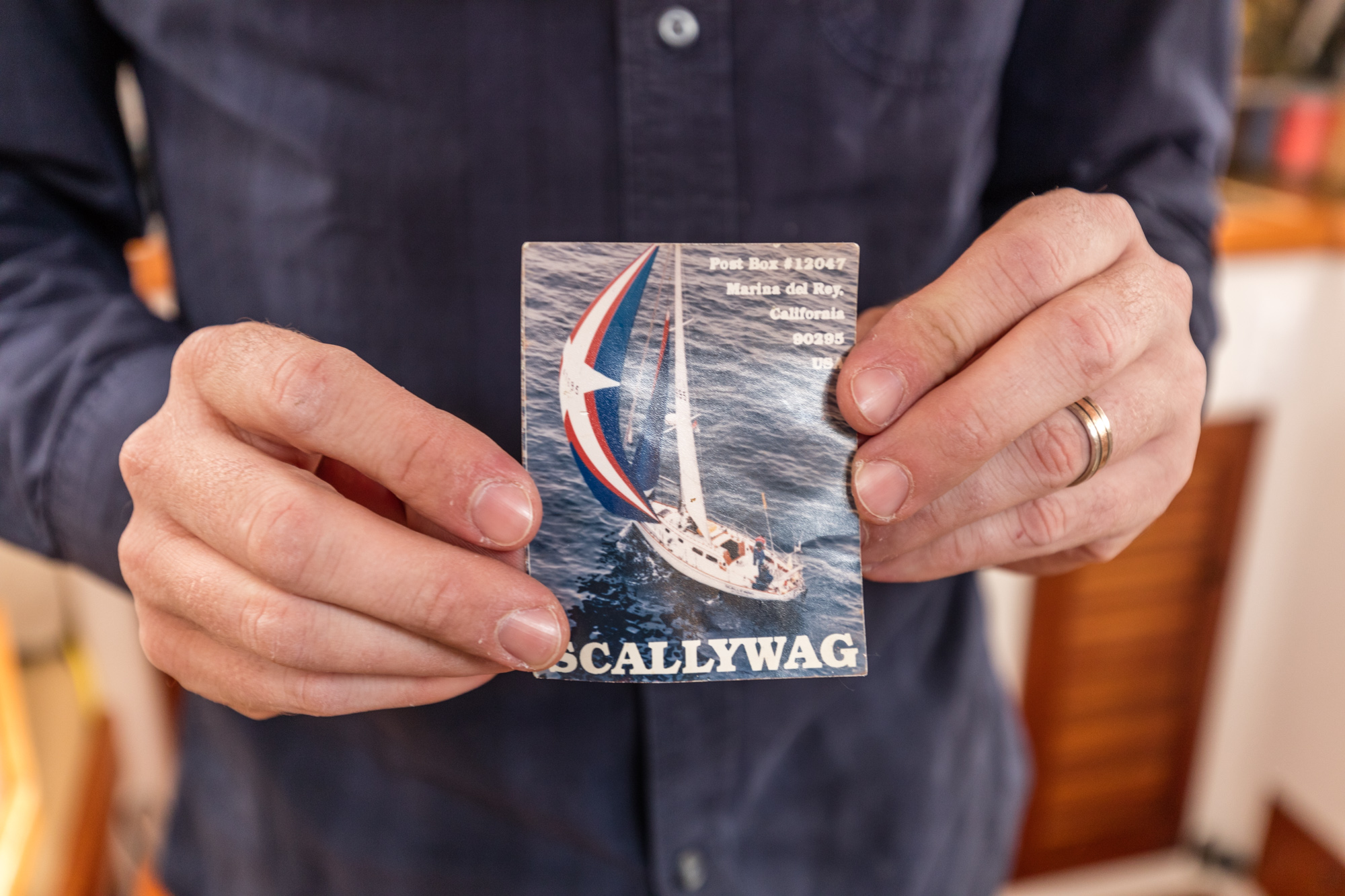 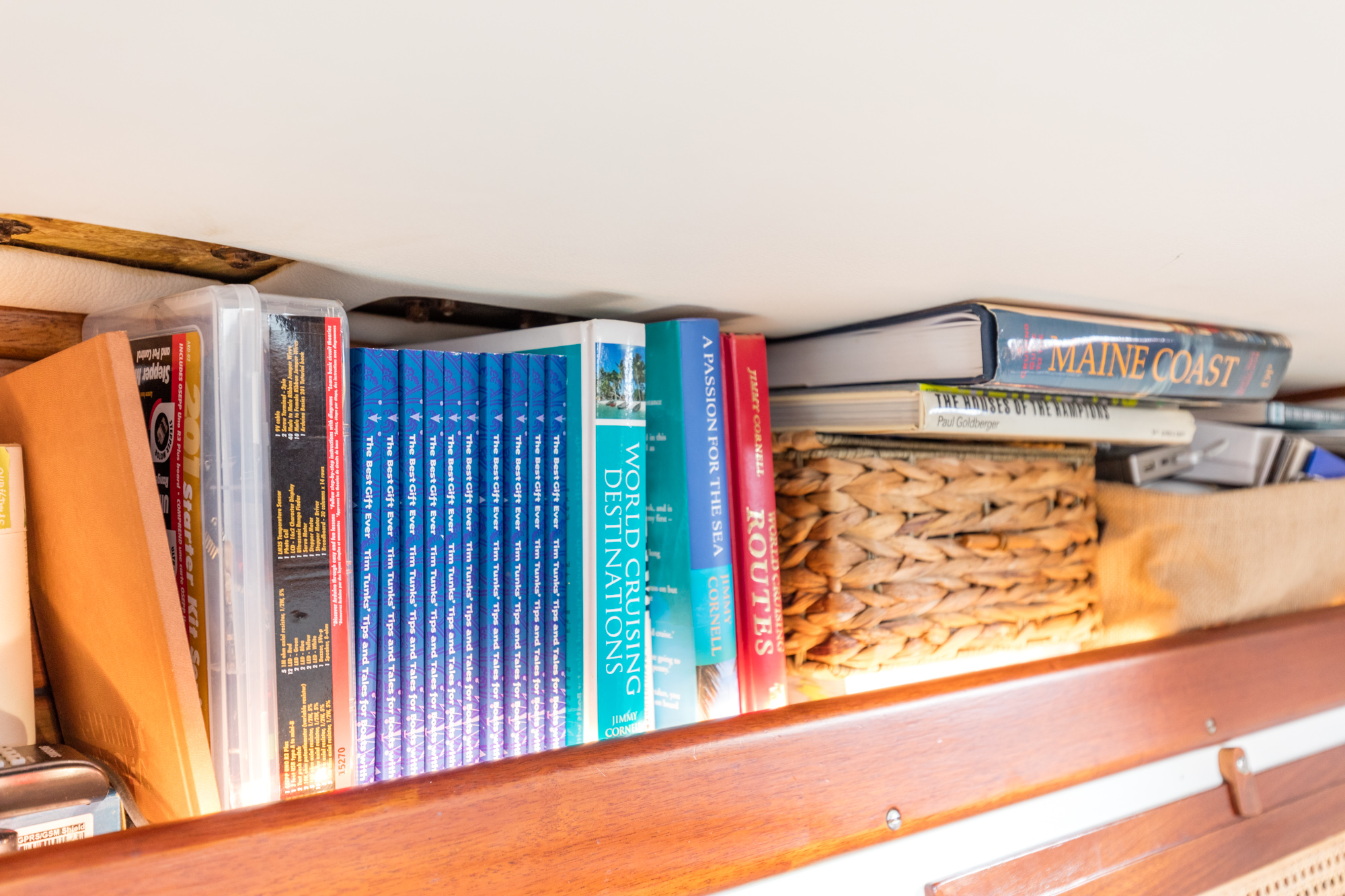 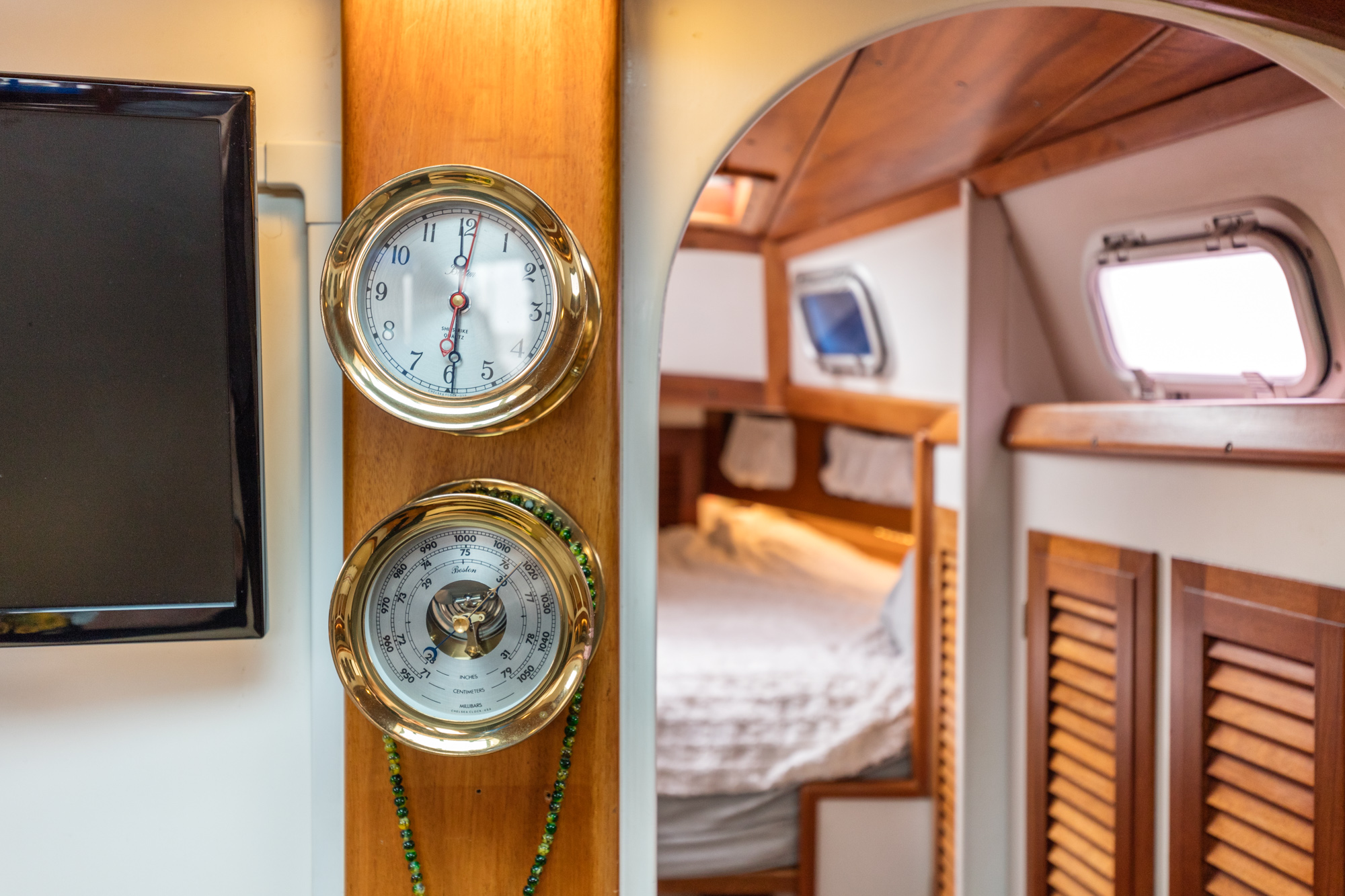 It's one of many "boat projects" he's undertaken—a joke among boaters, referring to the fact that any task you undertake on a vessel will take three times as long as you originally intended. Replacing their stove with a new one took a while because it was only after Vidar began working on it that he realized that the boat's whole propane system needed to be replaced. "Every boat project has a curve," he says with a laugh, miming the ups and downs. "I'm into it! I hate it! I finished!"

Another boat project: rewiring the whole thing with an A/C power system, which now lives in a makeshift fuse box at the stern of the boat. Prior to that, the boat got its electricity by plugging an extension cord into an external power source. After a marine electrician quoted them a $10,000 price to fix the problem, Vidar decided to do it himself. "I bought a book on marine electrical—I had no clue what I was doing—and redid the whole thing myself," he explains. The whole project took him about three weeks.

Of course, living on the boat isn't without its drawbacks: There's no shower (or even pressurized water) on board, so Fine and Vidar go to the boat lounge in their marina to take showers. And Fine, a passionate cook, has been forced to scale back on how much she can do on any given weeknight, given the lack of space and the fact that their kitchen has a small range, a smaller fridge, and that's about it.

But for the couple, the positives to the experience have far outweighed any minor drawbacks. "I didn't expect to like what I like about it," Fine says. "It's exceeded expectations." One of the biggest benefits is the fact that there's a big boating community, especially in their marina, so they've made lots of new friends just by virtue of living on a boat. Even the duo's dog, Honey, has adjusted well to sea living. "She's fulfilled her doggie destiny," Fine says with a laugh, explaining that life on the water seems to have calmed the usually-anxious Honey down. Eventually, the couple wants to go cruising—sailing to different destinations while living on the boat, not moored to a specific marina—though that's still a ways off. They also cover life on the Scallywag on their blog, Sail Me Om.

And they've gone from newbies to seasoned sailors in a short period of time, with plenty of advice to offer landlubbers who may be interested in finding their sea legs. "Buy a boat that's completely bare-bones, but the boat itself is solid," Vidar says. "If you buy a boat from the ’70s or ’80s and has all the systems you want, they're probably 20 years old. Pay less, and buy the systems new." But Fine's advice is even simpler: "Do it."