Looking back on the legacy of Marcel Breuer in the Bronx

A common reaction to Marcel Breuer and Associates’ 1959-61 Colston Hall at Bronx Community College, an arcing slab of concrete and steel hard by the Major Deegan Expressway and overlooking the Harlem River, is What’s that? (This is not an uncommon reaction to Breuer.) I’ve been tagged in blurry Instagram photos and even craned my neck in vain on Metro-North to get a peek. One passes the building so quickly that, when leaves are on the trees on the slope below, it can seem like a modernist mirage, its boomerang curve chiming with the semi-circular colonnade of Stanford White’s Hall of Fame for Great Americans higher up the bank.

Breuer would have been driving at a slower speed in 1960, commuting between his office on 57th Street and his famous house in New Canaan. Checking on the construction from the driver’s seat of his Jaguar, he noticed not the slab but an error in the rubble retaining walls below the building. "He saw some stone that was not proper," recalls architect Bernard Marson, Clerk of the Works for Colston and the three other buildings Breuer had designed for what was then New York University. "He made a little drawing of how he expected it, and he said, ‘That's not right.’ I felt very apologetic about it. I said, ‘Do you want it removed?’ He said, ‘No, that's history,’ that it was done. Everybody would have done what he requested, but he thought that it was important to leave it." A concrete wall near the staircase in the former Whitney Museum (1964–66) bears a similar flaw where a form board came loose during the pour. That mistake is also, now, history. 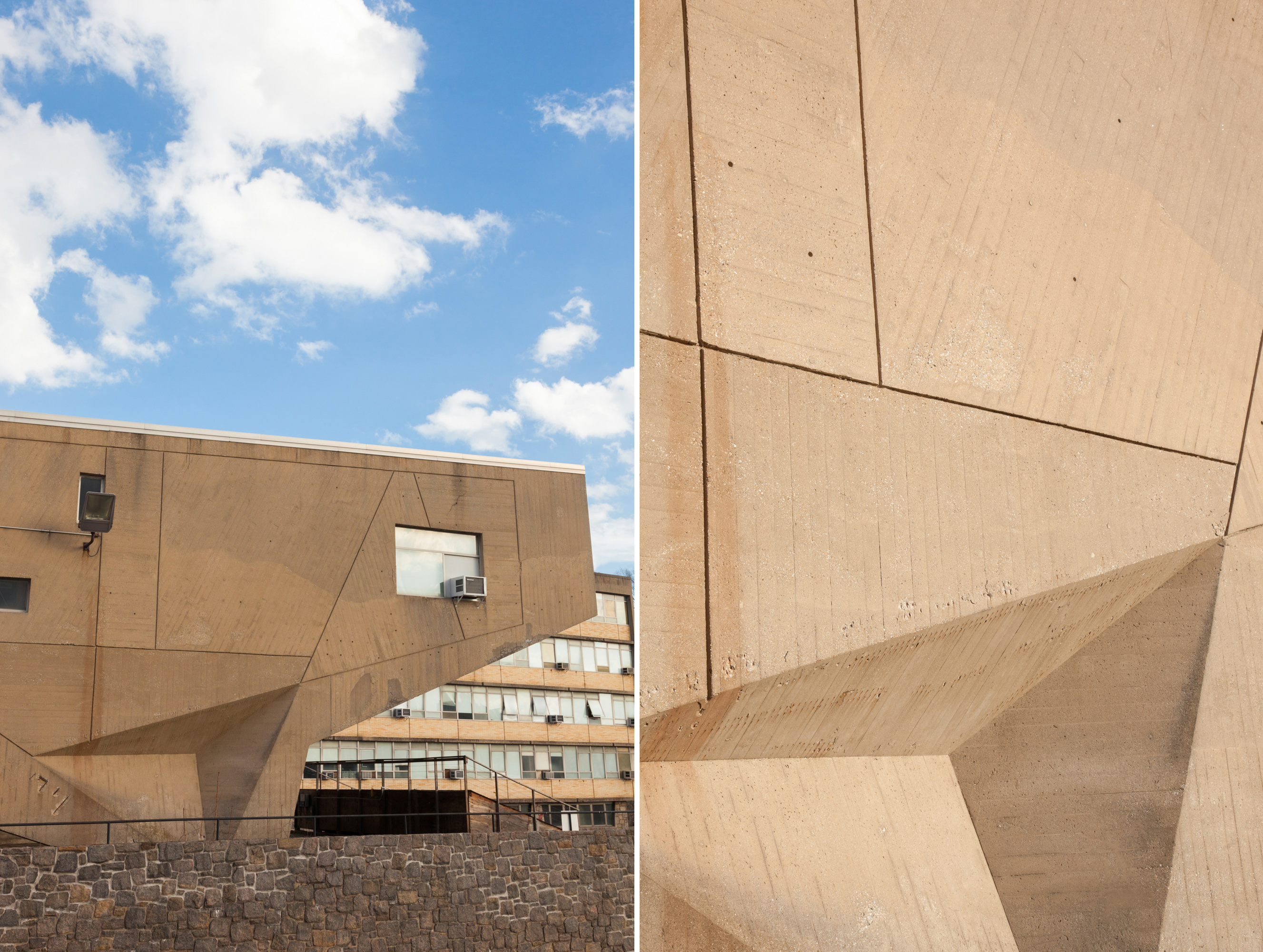 That ability to think simultaneously of the brontosaurus-scale picture and the small, hard-as-rock detail is a hallmark of Breuer’s work. But at Colston Hall and the other four Breuer buildings that are now part of Bronx Community College’s University Heights campus, you can see Breuer becoming Breuer. Begrisch Hall, which became a city landmark in 2002, looks big in photos but is actually relatively petite, a trapezoidal concrete structure lifted on sturdy triangular legs, with deeply scored side walls, that holds two utilitarian lecture halls. You can see the stepped risers for the built-in seats when you stand beneath. The upskirt view, however, also suggests the loom he would exploit in the Met Breuer’s reversed ziggurat and the even more photogenic ski resort at Flaine (1961–76). The sinewy shapes cast into the two bridges that connect Colston to a boxy student center (more Bunshaft than Breuer), show him moving away from the light and the smooth toward a more expressive aesthetic. Tech II, a classroom and lab building now known as Meister Hall, was built 10 years later, and shows a more settled style—one he also used for other institutions like Yale and Saint John’s Abbey.

"It seems to me that the original buildings have a delicacy and one scale, whereas Tech II is bold and very much more masculine somehow," says architect Robert F. Gatje, a partner to both Breuer and Richard Meier, who worked on Colston and the student center as a very junior designer. "I don't really want to say masculine, but when he was doing the first phase he was still doing things with a certain detail that he later absorbed into a much stronger vocabulary." 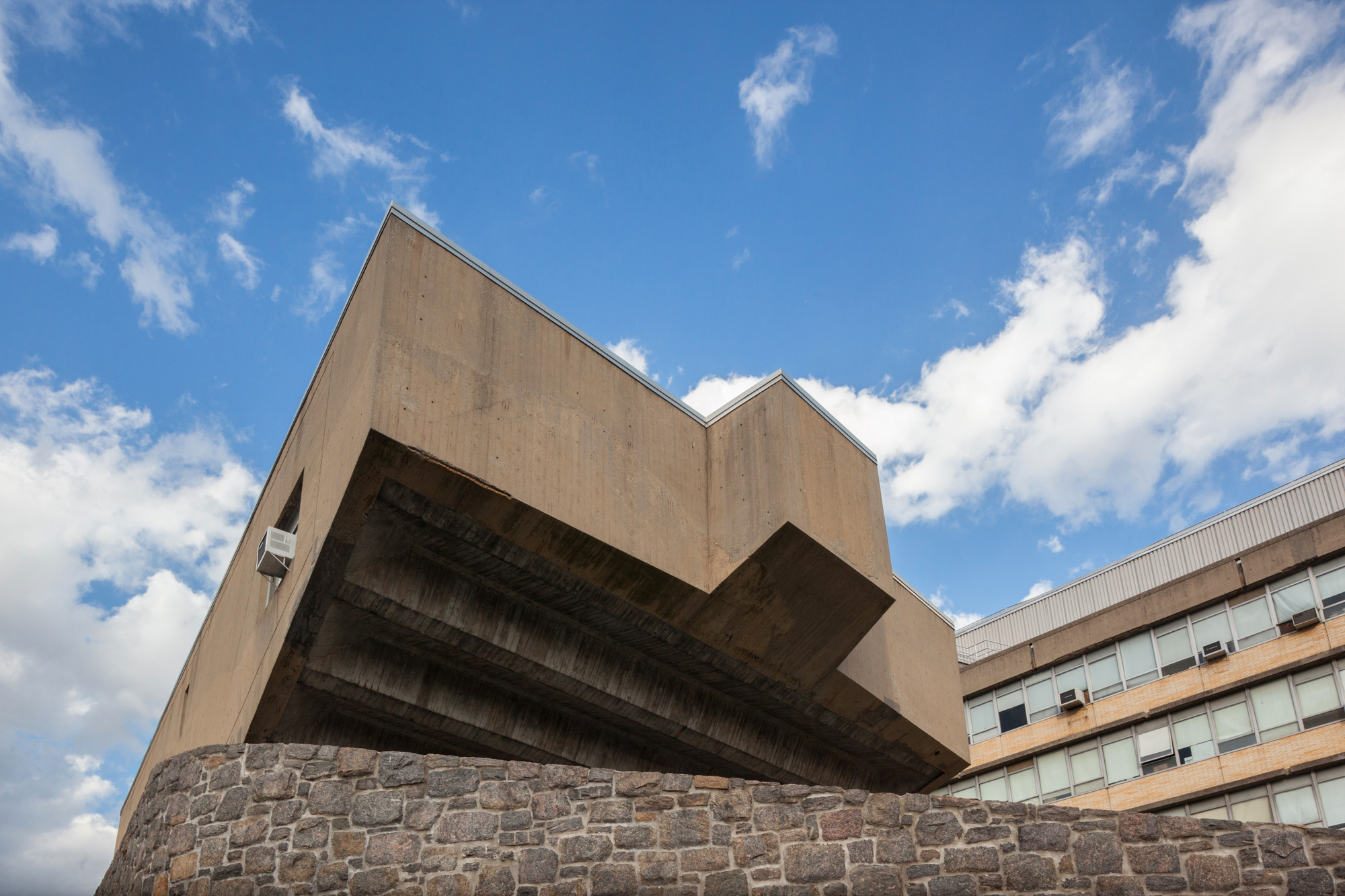 Another view of Begrisch Hall

In the mid-1950s, Breuer’s list of large-scale works was short, and included the UNESCO Headquarters in Paris and two buildings for Hunter College (now Lehman), also in the Bronx. NYU hired him to masterplan the university’s expansion of its Science and Engineering Schools on its uptown campus, originally designed by White around the turn of the last century. Then as now, NYU was on a bit of an expansion spree. President Carroll V. Newsom commissioned seven new buildings by 1959, including the late, lamented Loeb Student Center (1957–59) by Harrison & Abramovitz, on the south side of Washington Square Park. As the Landmark Designation Report for Begrisch Hall notes, Breuer cast aside White’s symmetrical template of U-shaped courtyards, instead creating a sequence of buildings in contrasting shapes that reached, even tipped, over the dramatic riverside bluff. Begrisch is linked to Polowczyk Hall (previously Tech I), a flat laboratory building, by a second-floor bridge, just as the student center below it is, in turn, linked to curved Colston Hall. "If you had a program for a lot of labs and a big assembly hall, some people would put the assembly hall right inside and somehow frame around it," Gatje says. Breuer "would leap at the opportunity to grab that lecture hall and put it outside, to express it and leave the repetitive cellular things behind."

The ability to think simultaneously of the brontosaurus-scale picture and the small, hard-as-rock detail is a hallmark of Breuer’s work.

One could imagine more Breuer behemoths marching down to the river on the Y-shaped legs of Tech II; when Breuer and Gatje designed IBM La Gaude, in France, they dealt with a hilly site in just this manner. White’s three buildings are all neo-Classical in style, faced in yellow brick, limestone, and terra cotta. Breuer would reinterpret the limestone as concrete, and adopt a similar golden brick on the end walls of Tech I and Community Hall, the student center—a minor gesture toward architectural context when he clearly preferred to deal with the topographical one. By dropping the building down the hillside Breuer showed deference to the Hall of Fame, while placing the bridges at its midpoint meant students would only have to walk up, or down, three flights.

Breuer’s return to the campus in the late 1960s has a different flavor: Meister Hall (originally called Tech II) is placed on flat, high ground at the end of one of White’s marked-out courtyards. A low colonnade of Y-shaped columns marks the entrance and what is now a parking court, a glassed-in space off the entrance has become a student lounge. But it is the other, windowless side that is the most striking. That wall, which makes beautiful geometric shadows when the light catches it just right, overlooks an open plaza with a couple of barren seating areas. 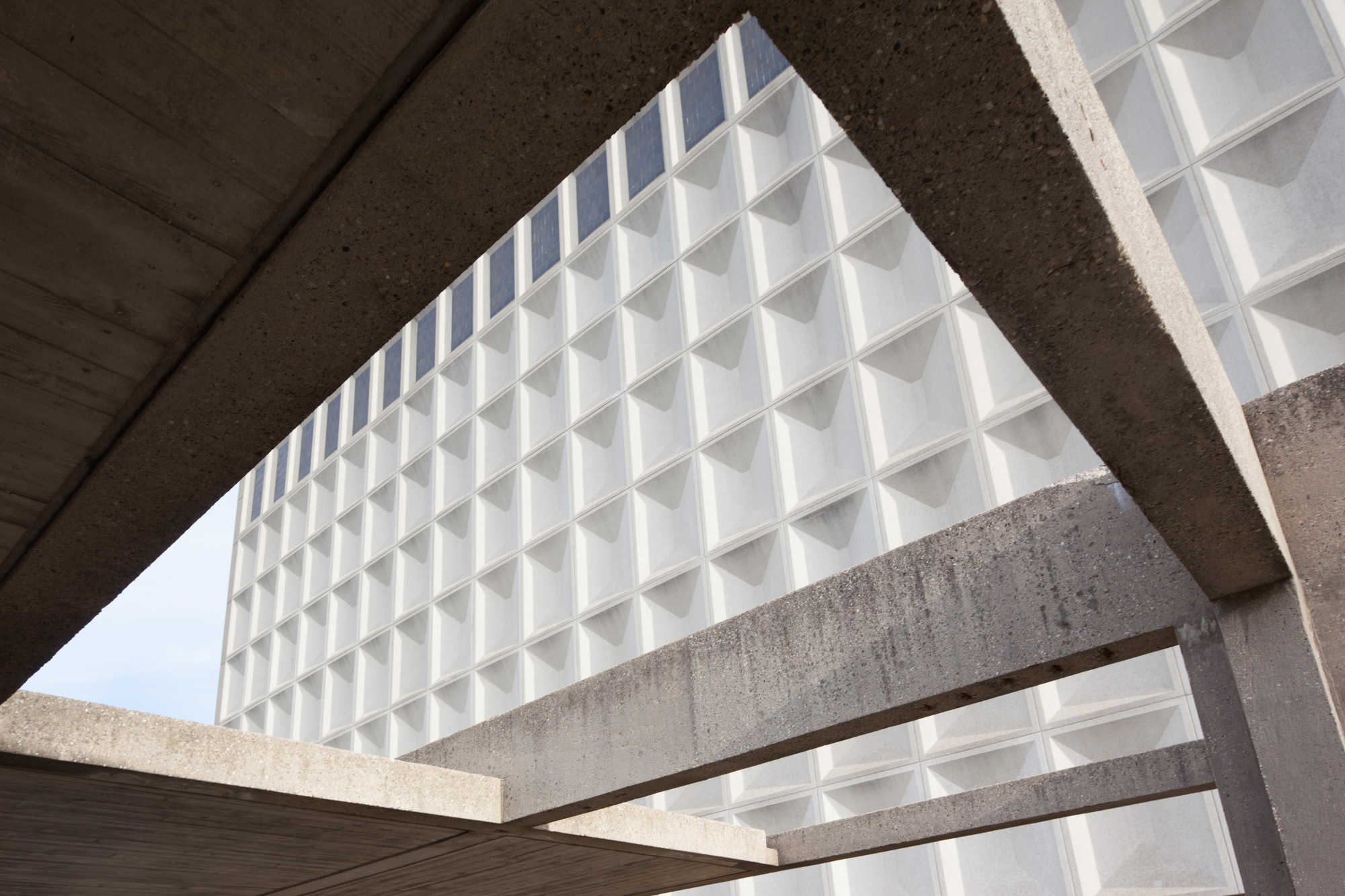 The windowless south-facing side of Meister Hall

"The most spectacular side of Tech II is the south-facing blank plumbing chase wall, which is so monumental and awe-inspiring on a gorgeous sunny day," says Jonathan Massey, dean of architecture at California College of the Arts and the author of a forthcoming essay on BCC. "That is a view no one ever sees. I can understand a kind of environmental conditioning rational for putting a blank wall on the south, but as an architect I would be desperate to have people approach from that side and enter under that wall." As it is, it is a great place for a photo.

The 1988 third edition of the AIA Guide to New York describes the buildings in two sentences, summing up the attitude toward the heroic architecture of the 1980s and 1990s: "Three additions to the campus before the NYU administration got its signals straight about the future. Both technology halls suffer from a concrete pomposity."

As it happened, Breuer’s blank wall would be one of NYU’s last moves in the Bronx. "Construction coincided with an almost 50 percent drop in student enrollment in University Heights," says the LPC Designation Report from 2002. The State of New York bought the campus for $62 million in 1972, and it reopened as Bronx Community College in 1973. BCC currently serves approximately 11,500 students on the 44.6-acre campus; the Stanford White parts of the site became a National Historic Landmark in 2012. Given NYU’s downtown hostility to its midcentury buildings, this is probably excellent protection for the non-landmarked Breuers. 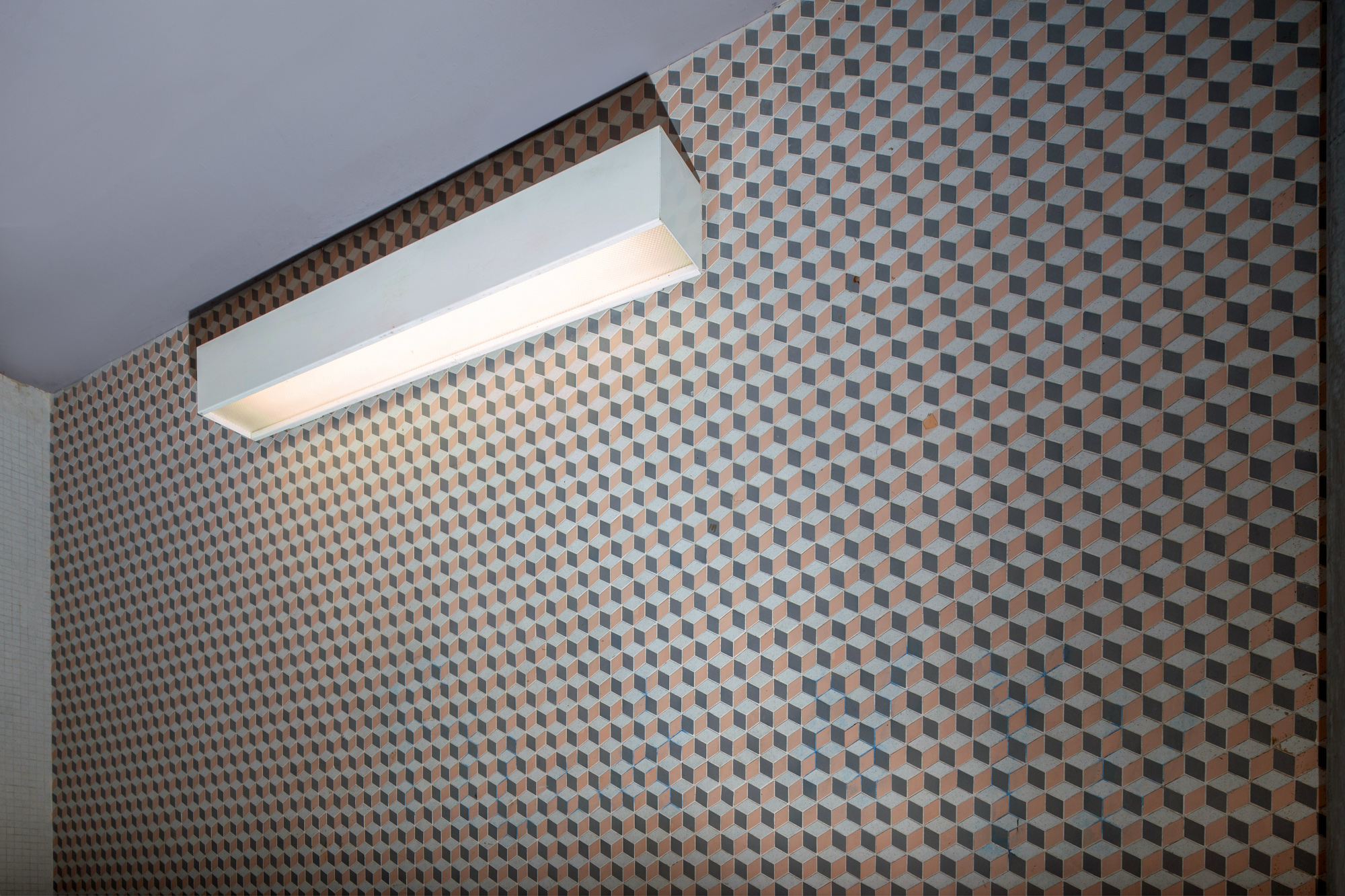 Detail of a wall in Colston Hall

Today, despite the need for internal upgrades, the Breuer buildings are the "workhorses" of the BCC campus, says architect Robin Auchincloss, Director of Campus and Facilities Planning. "On this campus the comparison is to buildings from the 1800s, either houses or buildings designed with a different program in mind. The Breuer buildings have large rectangular rooms and central air conditioning and windows, so maybe it is lower threshold that we are trying to compete with." Since BCC is a commuter school, the dormitory rooms at Colston have now been turned into classrooms by taking out every other (non-structural) wall. The challenge is maintaining materials and systems that were cutting-edge in the 1960s but worn out now: heating and cooling risers, window sealants, elevator upgrades. The college is in the middle of procurement for two, LPC-approved projects at Begrisch replacing the exterior exit stair and repairing the exterior masonry.

When I visited on a rainy day water was pouring in the trapezoidal windows in the stair hall of Tech I, but it was still a delightful surprise, a play on Le Corbusier’s deep, sculptural window walls in a utilitarian environment. Breuer created some great concrete moments in the Bronx, but it is graceful touches, like those windows, that stick with you. Auchincloss took me to the top of the north staircase in Meister Hall, where Breuer created a sky-lit concrete seat built in to the landing. Schindler Auditorium, at the base of Meister, has walls with a stair-step relief pattern, like the concrete version of the foam waffle you see in radio booths. In Colston the staircases have treads made of beautiful dark terrazzo, wood-topped handrails, and a Q-bertesque pattern of gray, black and brown tile on the walls. The bathroom partitions in Community are a dramatic, Whitney-worthy brown-striated marble. Dark, handsome and durable.

The student center, known as Community Hall, has the most hidden potential. Alternate plans for the site found in Syracuse University’s Breuer Digital Archive (labeled Scheme F) show it not as a free-standing building but cut into the hill, with a plaza on top and a wall of glass facing Colston that would have been a wonderful discovery upon descent. Maybe this was too complicated, or too James Bond, and Community feels under-detailed compared to the other buildings. What it did have was a big, open modernist room, which one could imagine stocked with flotillas of colorful Knoll furniture for student lounging. (I can’t find a period photo, but I can see how Ezra Stoller would have photographed this in my mind’s eye – something like the Loeb Student Center interior linked above.) The space is now filled in with the bursar’s office, but were that to be removed, as called for in BCC’s 2007 Master Plan, an architect could have some fun bringing texture and topography to this space. 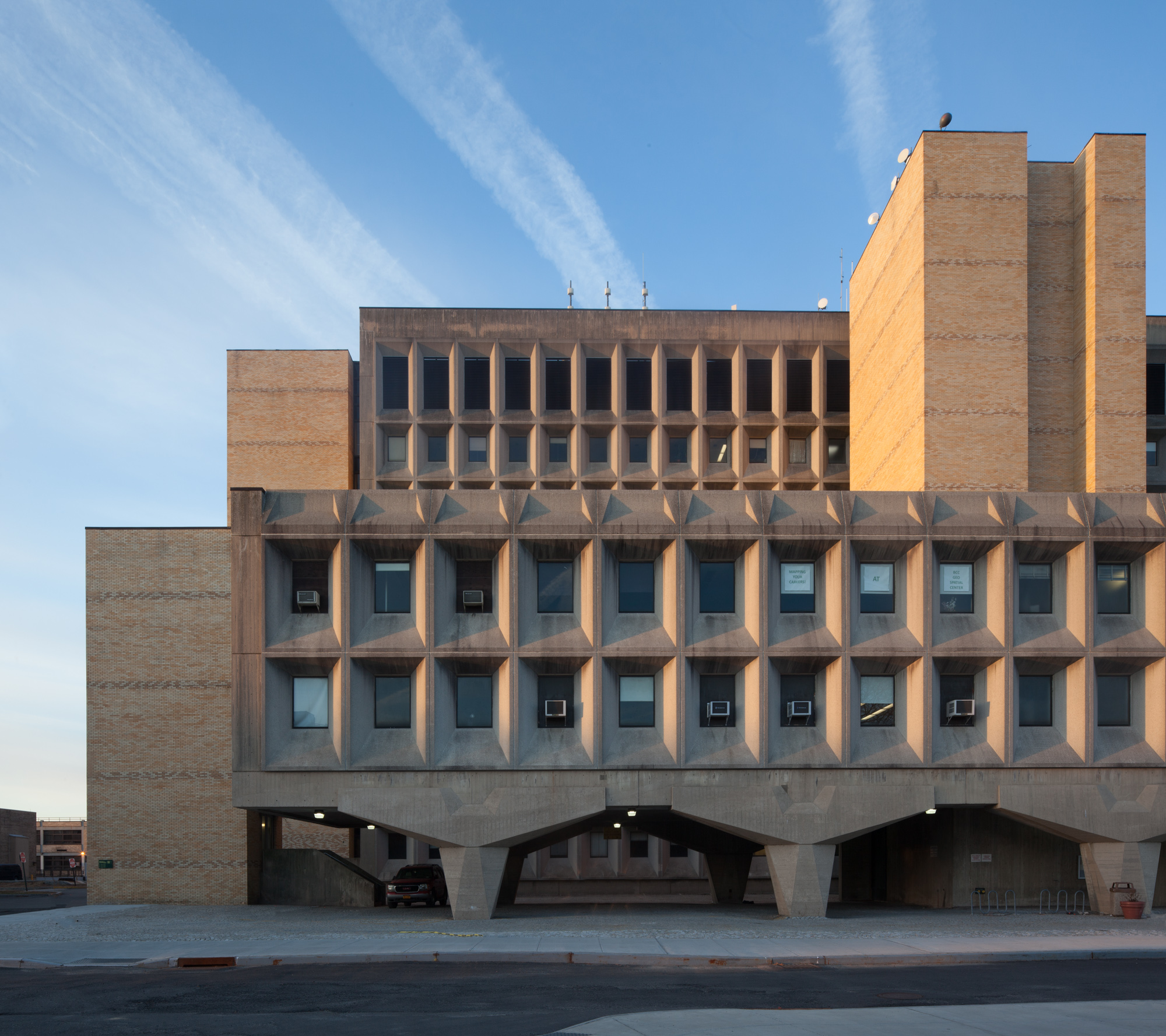 Another view of Meister Hall

Bronx Community College was founded in 1957 in order to geographically diversify the city’s educational facilities, and diversity remains part of its mission statement, a project worthy of heroic architecture even if it came as a hand-me-down. Neither Stanford White nor Marcel Breuer had a chance to finish the job; as a result, despite later additions (including a new library by Robert A.M. Stern Architects), the BCC campus still feels unfinished as an ensemble, as well as minimally connected to the neighborhood in which it sits. If the rider’s view from the highway is brief and blurred, the students’ walk from the subway at Burnside Avenue is long, with Colston at its furthest point. Yet there is something wonderful about these machines of late modernism still clanking away, doing their job as a platform for education and providing moments of spatial inspiration between classes. It’s unlikely that they will ever get the kind of deluxe refurbishment visited on Breuer in Manhattan.

At the moment, the college is raising funds to save White’s domed, waterlogged Gould Memorial Library. But at a time when richer institutions are embarked on architectural arms races, CUNY seems to recognize that they’ve already got jewels. Those who love architecture should return on foot for more than a blurry photo.

View all stories in Critical Eye