Touring 3 World Trade Center, a Supertall On the Rise in Lower Manhattan

Construction work at 3 World Trade Center, one of the many building that make up the revitalized WTC campus, is currently in full swing: the building stands just over 900 feet tall at present, and when construction wraps up in 2018, the structure will stand 1,079 feet tall, making it one of the tallest skyscrapers in the city.

But it took a while to get to here: When the financial crisis hit in 2008, the future of several projects at the World Trade Center were thrown in turmoil—including this tower and its neighbor 2 World Trade Center. The Port Authority of New York and New Jersey wanted to significantly decrease the heights of all the buildings, and 3WTC might well have ended up being a four-story structure. But Silverstein Properties, led by its head Larry Silverstein, was determined to see the projects as they were originally imagined.

During an exclusive tour of the site, Curbed got a peek at the still under-construction skyscraper—including the current pinnacle of the tower, the yet-to-be-finished 74th floor. The trek to the top included an elevator ride to the building's halfway point (the 40th floor), then a ride on a second hoist that shoots you several stories above, and then a climb up several flights of stairs that only get narrower as you get higher. Finally, after climbing a steel ladder—the final steep ascent—and a wobbly few steps later, we were faced with panoramic views of New York City from the highest point on the construction site, which at that time was around 920 feet.

Some of the Financial District's biggest forthcoming developments can be seen from this height, including the Robert A.M. Stern-designed 30 Park Place, another Silverstein Properties project. Not far from that is Alchemy Properties's condo conversion of the upper floors of the Woolworth Building, now known as the Woolworth Tower Residences. And further away in the distance is the unmistakable presence of the 57-story, Jenga-like tower designed by the Pritzker Prize-winning team at Herzog & de Meuron at 56 Leonard Street. 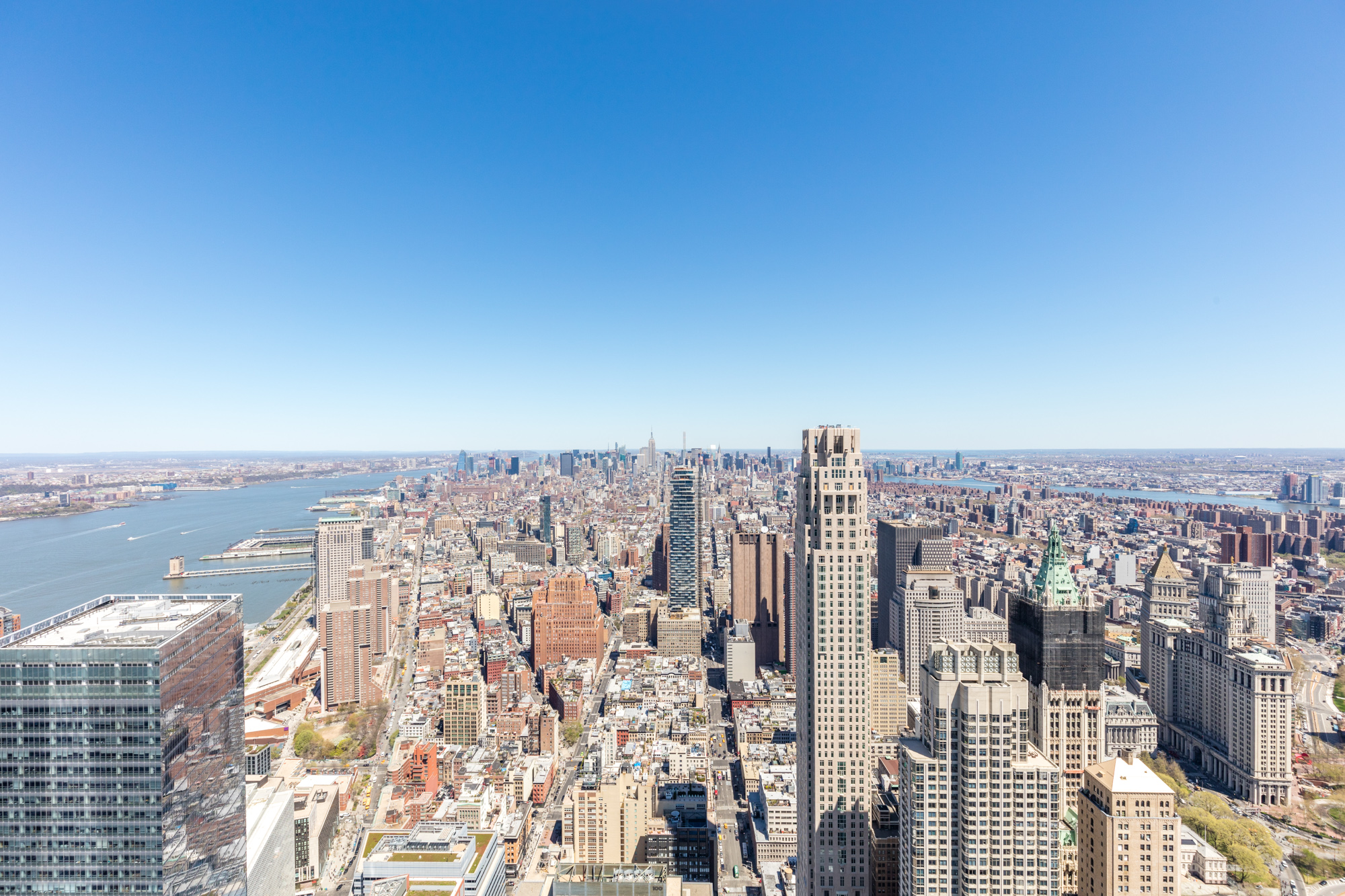 3 World Trade Center, much like the buildings around it, has also been designed by a starchitect—Richard Rogers of Rogers, Stirk Harbour + Partners. The design of the building is unique in that all corners of this structure are column free. It is supported by an exterior bracing system, and the building was designed so that future tenants would have unimpeded views of the city. Developers have described this as a "structural load-sharing perimeter moment frame system." 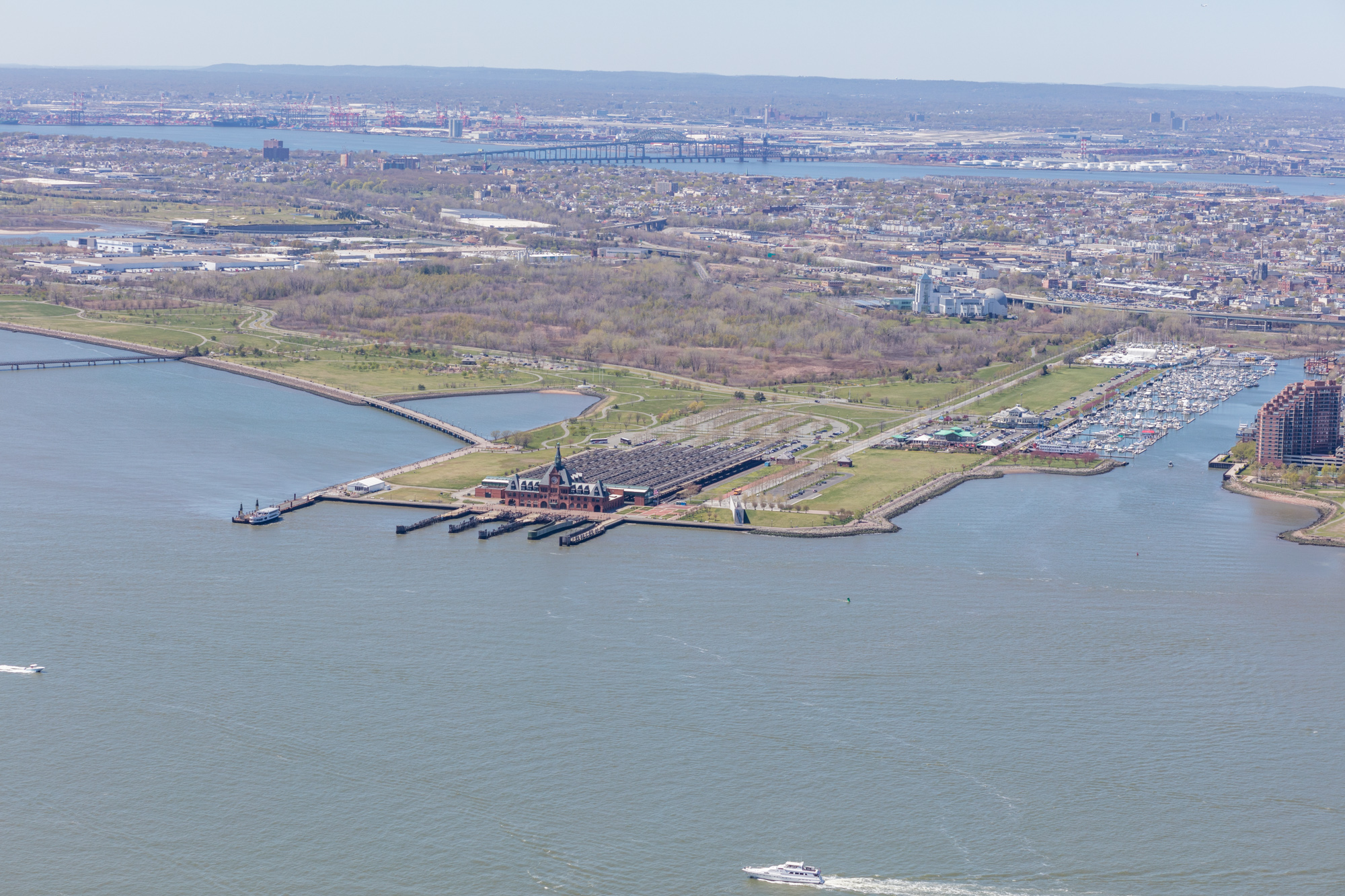 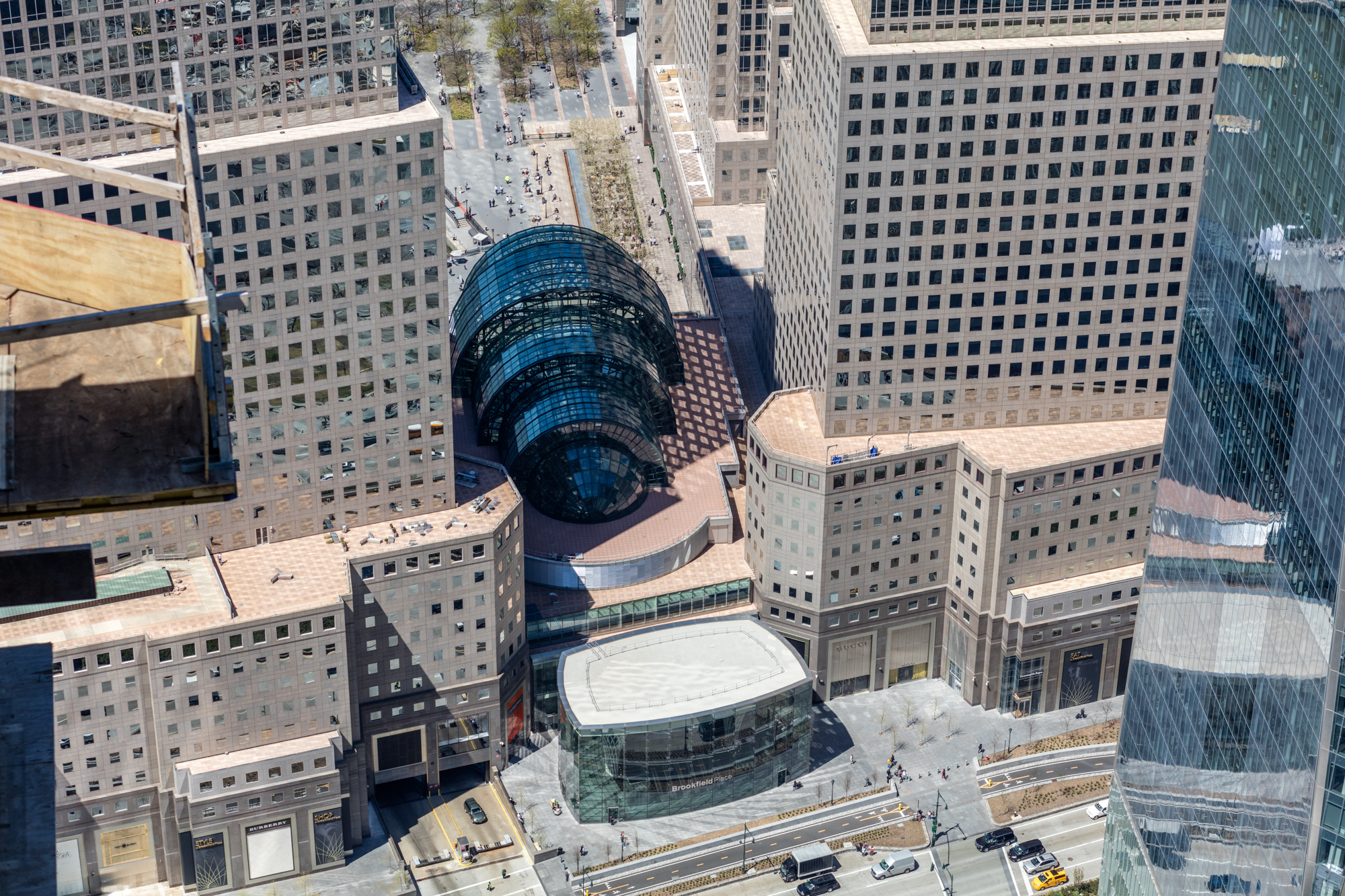 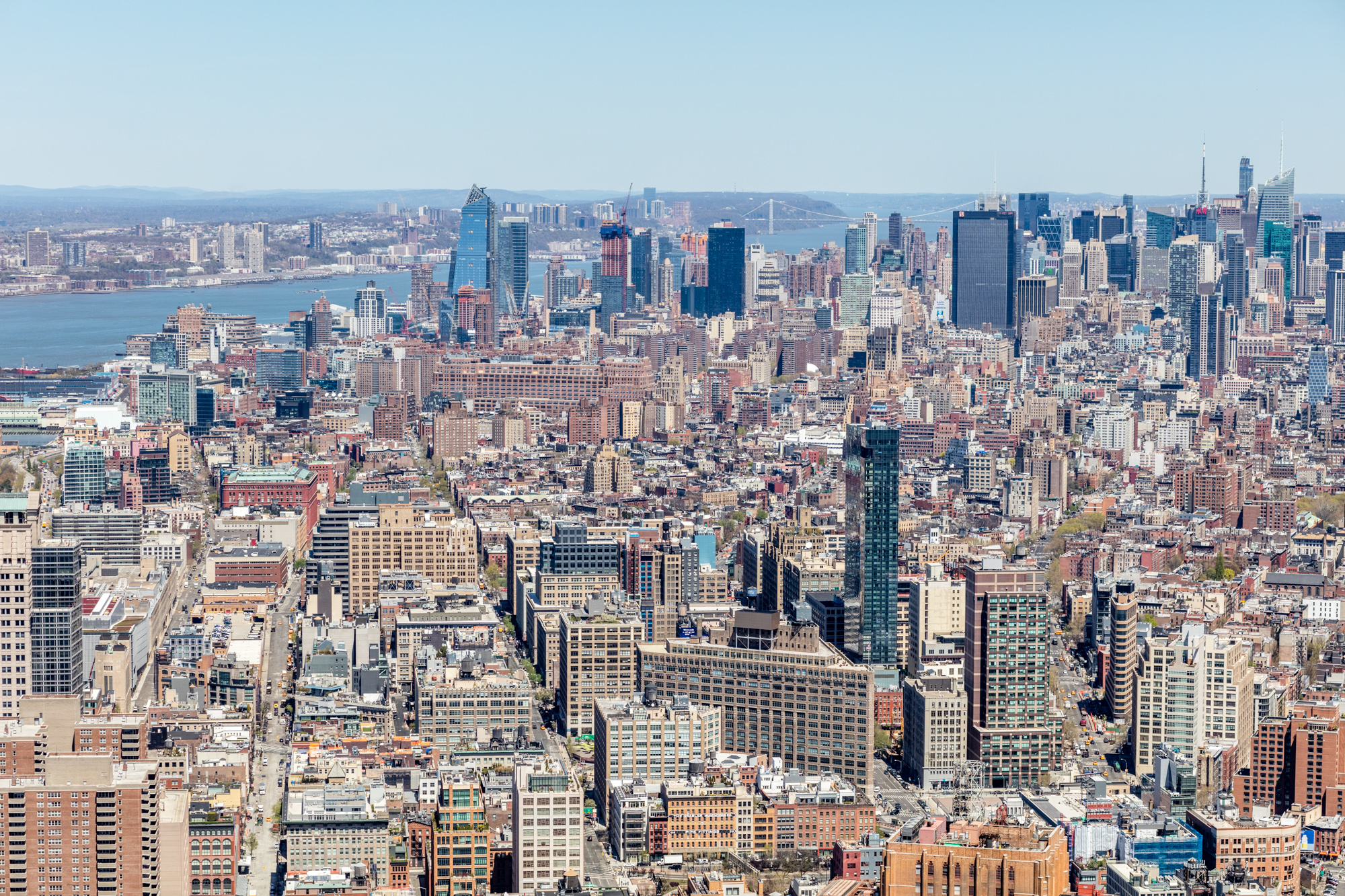 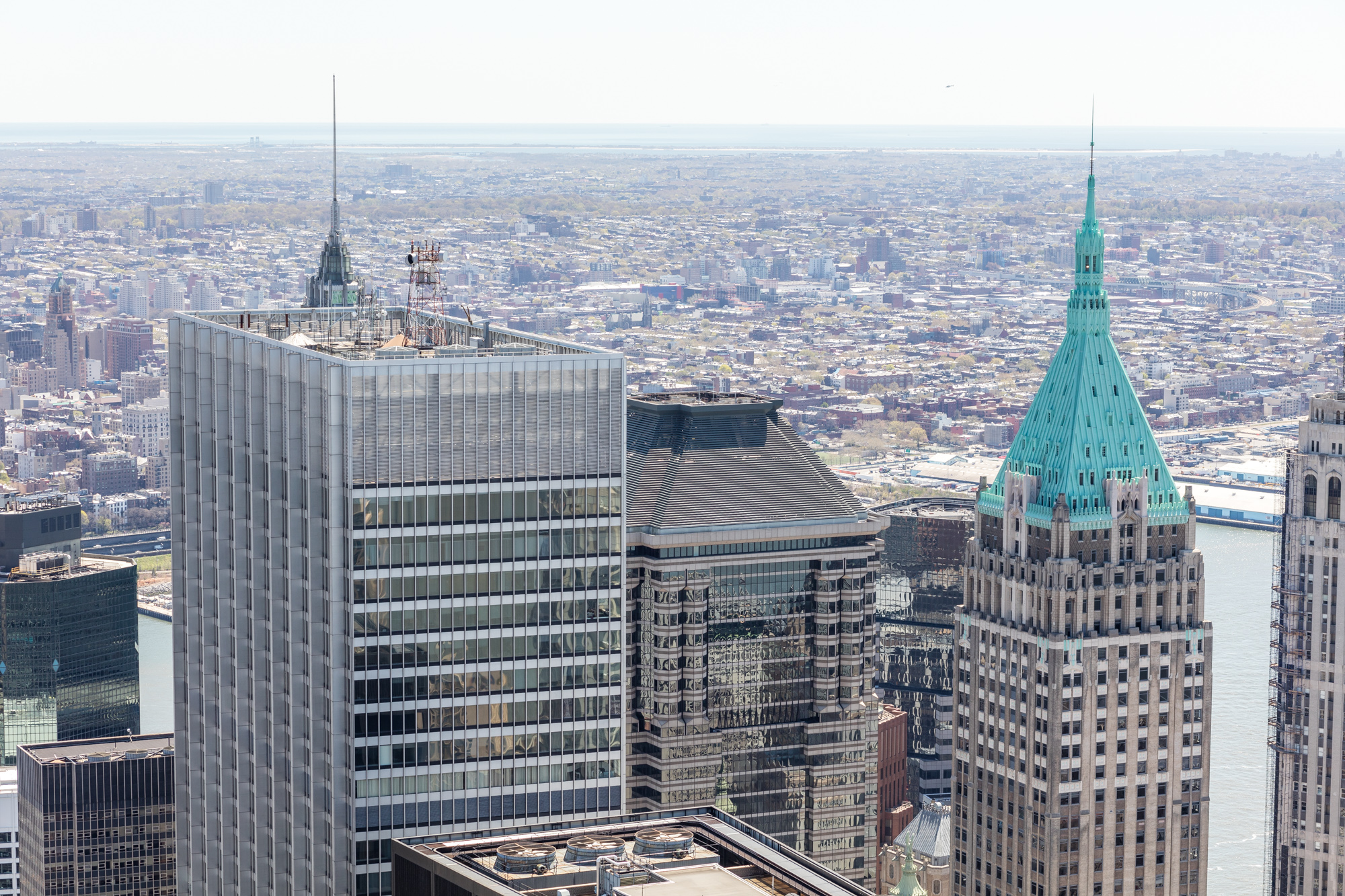 Construction will also lead to a re-established Greenwich Street, and will transform the space around Cortlandt and Dey Streets into pedestrian areas. The building will be serviced by a total of 44 elevators. So far, media company GroupM has signed on for over 500,000 square feet at building, and news emerged in January that the company had signed on for an additional 170,000 square feet.

Apart from 3WTC, Silverstein Properties owns three other buildings at the site: 7 World Trade Center, which was the first of the new towers to be completed at the site in 2006, and was designed by David Childs; 4 World Trade Center, which was completed in 2013 and designed by Pritzker Prize-winning architect Fumihiko Maki. Dara McQuillan, the Chief Marketing & Communications Officer at Silverstein, describes 4WTC a "the Predator building" (yes, after the Arnold Schwarzenegger film), thanks to its extremely reflective surface and its ability to blend in completely with the surrounding to sometimes make it seem invisible. The developer is also behind 2 World Trade Center, the future of which is still uncertain after Rupert Murdoch pulled out of a deal to move News Corp. to the skyscraper.

Editor markup for 3 WTC Tour. This is only visible in the story editor.
Foursquare

View all stories in Curbed NY Inside
New York