Interior designer Tamara Eaton is no stranger to big renovation projects: As the driving force behind her eponymous design firm, she's worked on a number of high-profile developments, including staging the model units at CetraRuddy's latest Hell's Kitchen condos, and crafting the interiors of New York homes as varied as a modern Southampton cabin or a completely revamped Park Slope townhouse. But none of those compared to her biggest project to date: the gut-renovation of her Chelsea condo.

Eaton bought the apartment in 2013 after seeing a listing for the apartment on, of all places, Curbed. The apartment was described at the time as "frighteningly colorful," and the listings photos don't disappoint, with every single room painted a different color (salmon, bright green, and so on). Meanwhile, the kitchen was small and cramped—there was a mini-fridge and a tiny stove—and the entryway featured a home office built into a tiny little nook. It was, to put it mildly, a bad use of space.

But the bones were there, and the building, a lovely Art Deco co-op built in 1931, was a rarity in the neighborhood. Eaton was sold, even if it meant ripping everything out and starting from scratch—which is exactly what she did. "The whole apartment was a gut," Eaton explains. "The only thing we kept were the floors—they were in decent condition, and there’s something about old floors that just feels so beautiful."

What resulted from the months-long renovation was a complete transformation of the apartment. Gone are the oddly-colored walls, the too-small kitchen appliances, and the dark beams on the ceiling; in their place is a bright, clean apartment that's totally in line with what Eaton calls her "modern eclectic" aesthetic. "What’s really important is mixing highs and lows," Eaton says, and she carries that ethos throughout the entire space. Pieces from mass-market retailers like West Elm and Ikea are situated alongside priceless antiques (like Eaton's coffee table, a Josef Frank piece that once belonged to her grandmother), souvenirs from Eaton's travels, and custom items.

When I find something that I love I might not know where it’s going to go.

And thanks to her day job, Eaton not only has an extensive knowledge of vendors whose work she knows she loves ("Because I’m always designing things, it’s just part of my typical process," she explains), but also a large collection of items that she's picked up over the years that could have worked in her space. "I buy everything when I find it, and I love it," Eaton explains. "When I find something that I love I might not know where it’s going to go. It could go in a client’s apartment, or in my apartment, or in a model apartment later on. But when I see, I buy." 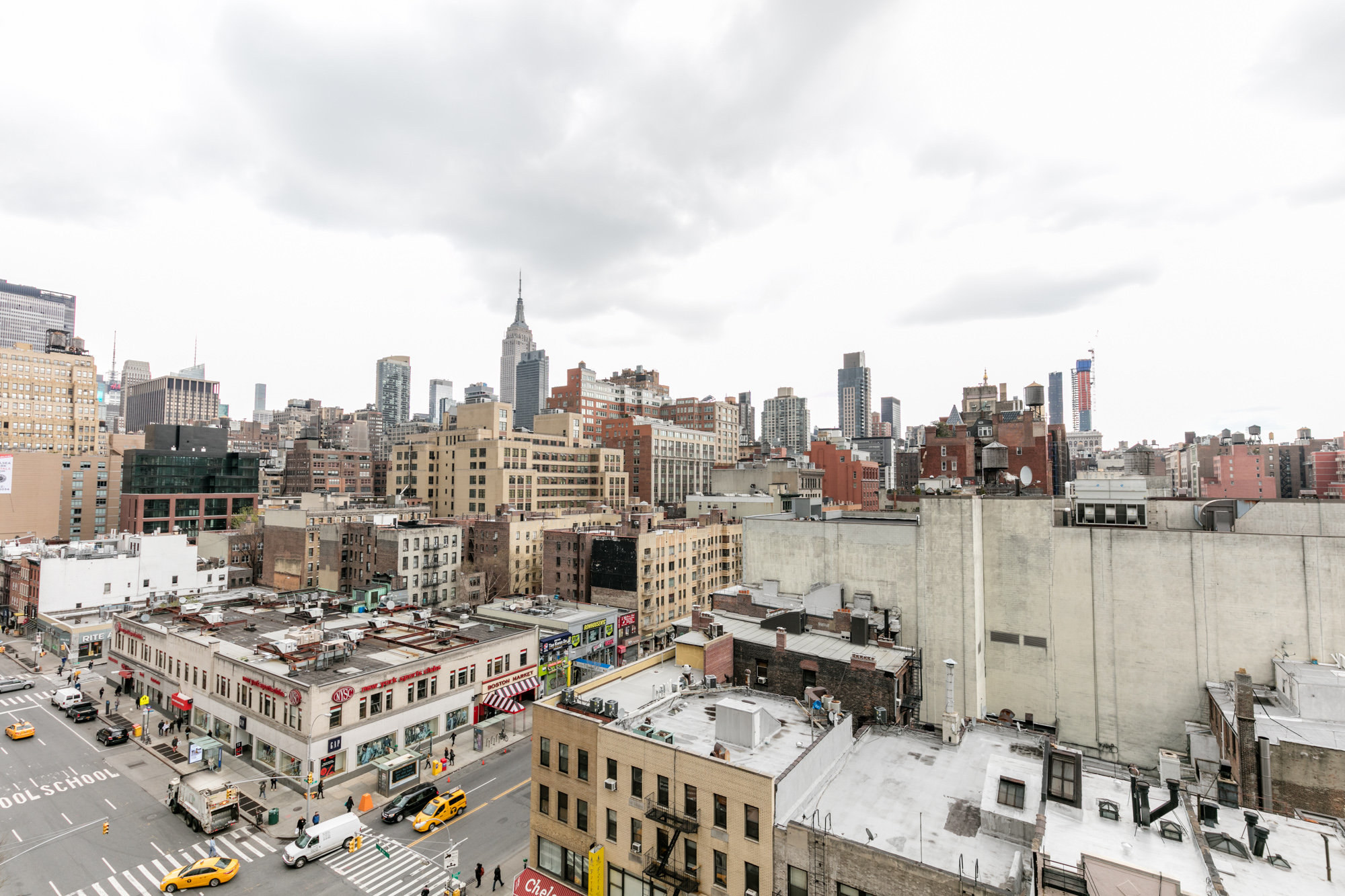 Eaton staged the dining room of her apartment to maximize her view of the Empire State Building. Photo by Max Touhey for Curbed.

The revamp wasn't without its challenges, chief among them the size of the apartment: it's a one-bedroom that measures only 850 square feet, by Eaton's estimation, which led her to come up with a number of space-saving solutions—hidden storage space in the kitchen and bathroom, for example, or creating an oversized medicine cabinet behind a full-length mirror next to the bedroom's walk-in closet. "Storage was key for this whole place," Eaton explains. "And everything has to be closed storage, because I don't like clutter."

But another challenge was simply the fact of doing work in a New York City apartment. First, Eaton had to get the proper approvals to make the reno work happen—a process that was hampered by "bad logistics" early on—and then, the work itself needed to be executed. "You can’t throw a lot of guys in here to work—they’re all on top of each other," Eaton explains. All told, it took about eight months before the apartment was habitable.

The most difficult part of the renovation was changing up the kitchen, which had a narrow one-wall layout when the couple purchased the apartment. Because of the building's restrictions on building wet-over-dry—adding plumbing over a room that wouldn't have any, in this case in the downstairs neighbor's apartment—Eaton couldn't change the layout of the room too much. Instead, she decided to add an island that juts into the living room, which creates both additional space as well as a chic divider between the living and dining areas. She also put a full-sized refrigerator in a space that was previously occupied by a cabinet. "There were a lot of iterations of furniture plans and cabinetry layouts to make sure it felt comfortable and big enough," she notes. "It’s still tight, but the kitchen doubled in size."

But despite the logistical challenges, Eaton says that the renovation was ultimately beneficial—not just because of the end result, but also because it was the first project on which she oversaw the entire thing, from ripping out the walls to the minute decor details. "It could’ve ended up that I was biting off more than I could chew," she says. "But I work so hard and am so devoted to what I do that it never felt like too much."

And even though she's tackled larger projects before, working on something that was so personal—and where Eaton had the final say on everything, rather than collaborating with a client or an architect—was both exhilarating and intimidating. "Putting all the pieces together wasn’t that tough, and this is a much smaller scope than most of my projects," she explains. "[But] a lot of the process was finding my own voice without a client. It let me get to know myself, and made me very secure in decisions I make. It sounds almost arrogant to say it, but now I know I know what I’m doing! I’m not scared to take on projects anymore that are a little outside of my comfort zone, because I know I can get them done." 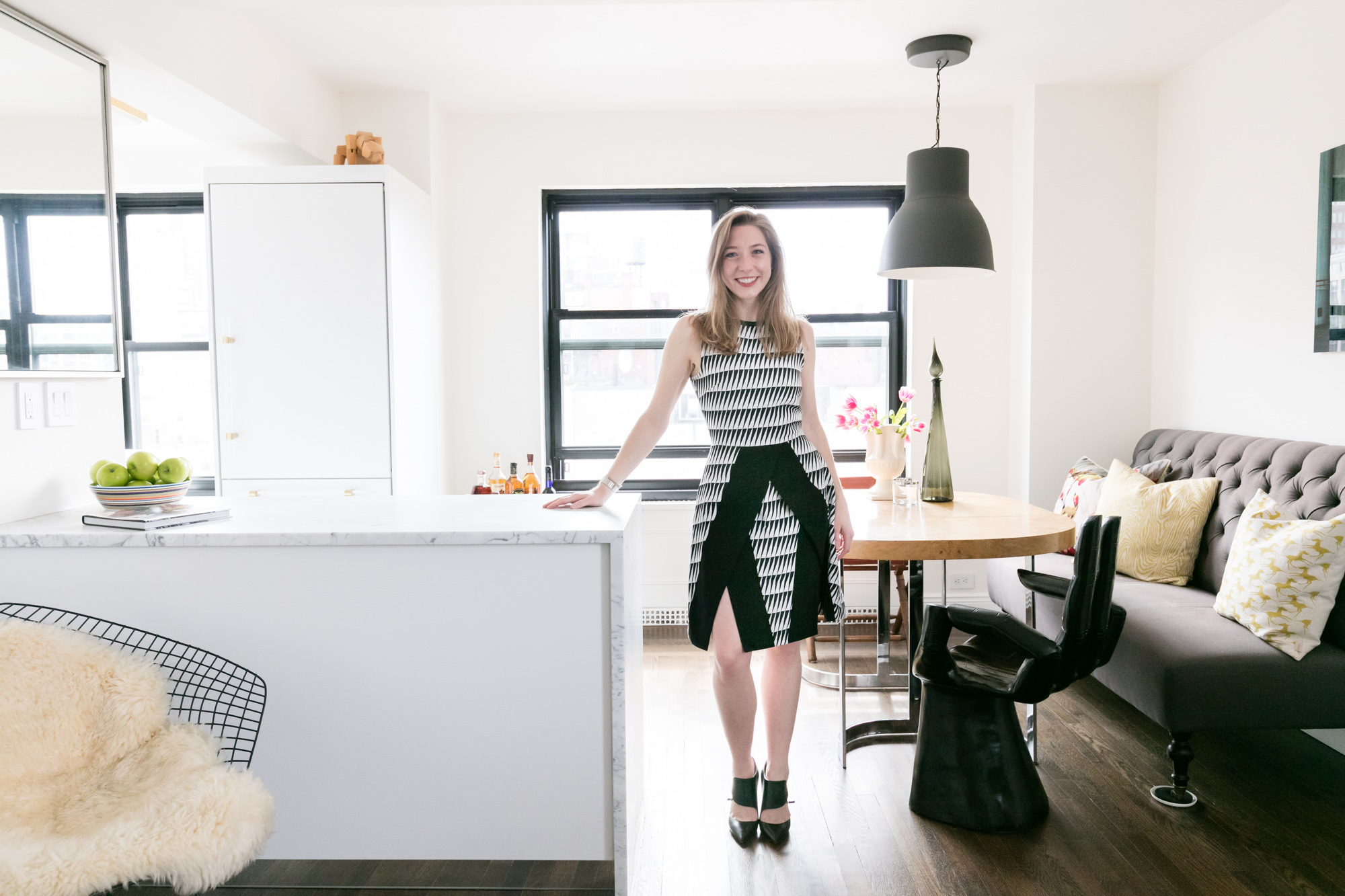