As the New York Public Library wraps up construction on its iconic reading room, get a peek behind the scaffolding

For nearly two years now, the New York Public Library's Rose Main Reading Room and Bill Blass Catalog Room have been closed as they undergo a modest, but important, transformation. In fact, when those rooms reopen to the public in the fall, it's unlikely that the general public will even notice that much has changed.

But the public certainly knows the story behind the renovation: In the spring of 2014, one of the plaster rosettes that adorns the majestic ceiling of the Rose Main Reading Room came loose and fell more than 50 feet to the ground. After that incident, the NYPL conducted a thorough structural investigation of the rest of the ceiling; while much of it was found to be in good shape, they decided to move ahead with a restoration regardless. "Once you're putting scaffolding like this on" it just made sense to fix the little things that needed fixing, according to Iris Weinshall, the NYPL's chief operating officer.

Now, the library is getting close to completing the project: the Bill Blass Catalog Room is just about finished, with its lovely ceiling mural replaced as of last week; work on the Rose Main Reading Room, meanwhile, is coming along. Weinshall anticipates that the two rooms will be open to the public again by early fall, well in advance of the original 2017 completion date. (Though she acknowledges that "some people would say [work] didn’t move quick enough.") Curbed recently had the opportunity to climb the scaffolding in both rooms to see what's happening—read on for more details about the renovations (and, of course, photos of that gorgeous ceiling).

Even though work is close to being completed, the Rose Main Reading Room is still very much a construction zone: its dark wood tables and brass lamps are currently sheathed, and floor-to-ceiling scaffolding (which is called the "dancefloor") has been erected all around the room, putting workers within arm's reach of the iconic ceiling. Although the renovation initially was meant to just be of the room's canopy, it quickly ballooned.

At the outset, the NYPL discovered asbestos in the ceiling, which had to be removed before any work could continue. Soon after, they decided to fix not just the damaged rosettes, but also the parts of the ceiling that had chipped or cracked over the years; work on the Blass room followed after that, as did the decision to clean all of the brass chandeliers that hang over the space. "You know how when you remodel your house, you start with a little project, and then it gets bigger and bigger?" Weinshall says. "That's how I would liken this project."

To facilitate the construction work, the NYPL collaborated with EverGreene Architectural Arts, who had also worked on the restoration of the Rose Main Reading Room in the 1980s, and Tishman Construction, which is the project manager for the whole shebang. EverGreene worked on implementing many of the decorative details, including replicating murals and re-casting the rosettes and other plaster ornamentation. 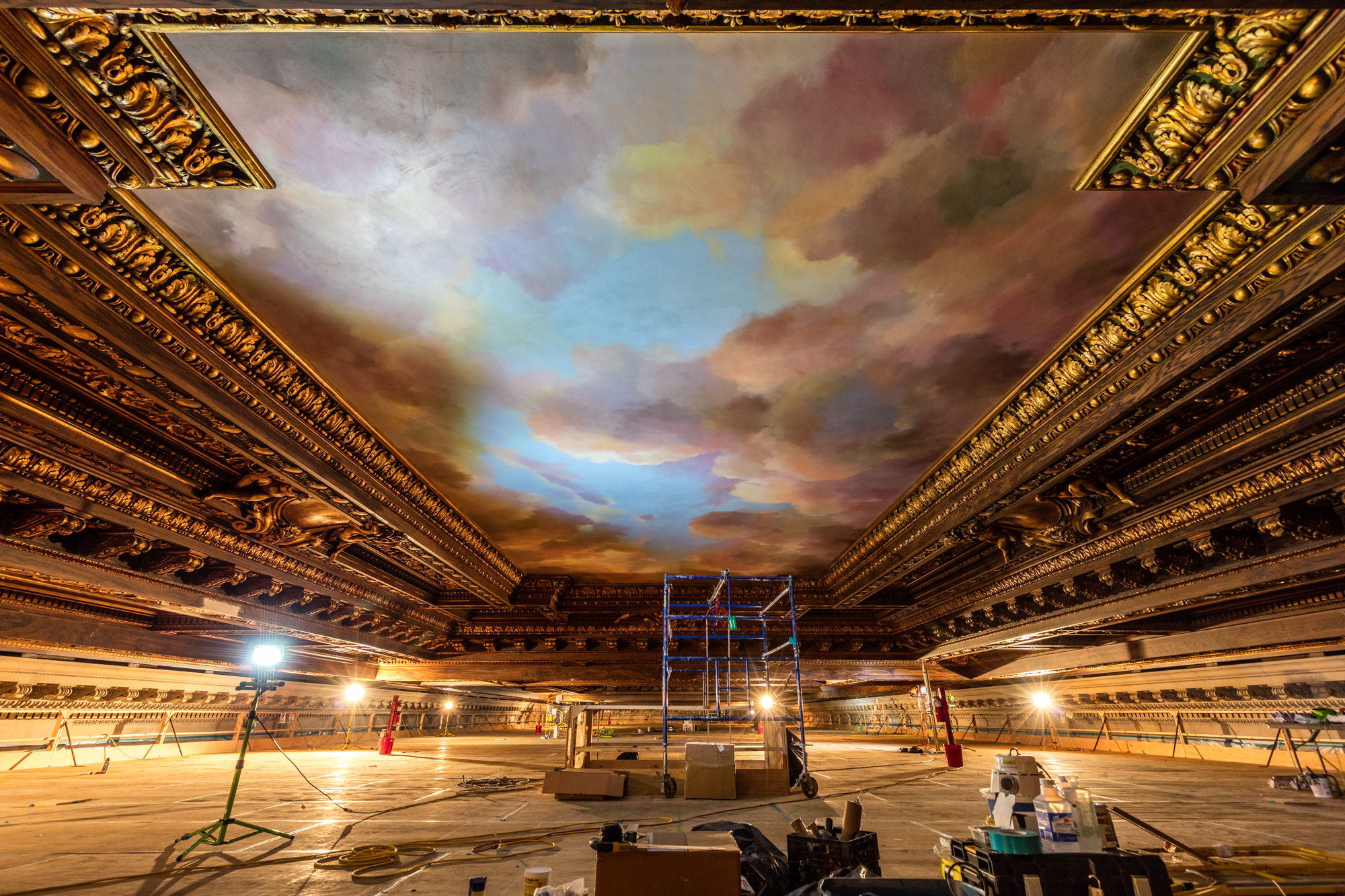 More than 40 feet above the Rose Main Reading Room, its distinctive ceiling gets some loving updates. Photo by Max Touhey for Curbed.

And here's a fun, possibly little-known fact about the Rose Main Reading Room: It's not just the ornamentation that's made of plaster; the entire ceiling is made from the substance, with many sections painted to look like wood or gilded with gold leaf. So renovating the ceiling isn't quite as easy as simply buffing a bit of wood—but the NYPL got lucky in that very little of the ceiling needed to be replaced. "We originally thought all of the rosettes were going to have to be redone," says Weinshall. "If that was the case, it would have been [completed in] 2017 and we would have been looking at a much larger bill."

The Bill Blass Catalog room presented its own set of challenges, namely the fact that the mural on its ceiling (which was inspired by the same celestial one in the Rose Main Reading Room) was not in the best shape. "When we went up and looked at it, it had this brown paint over it," Weinshall says. "And we said to ourselves, 'Really? We're spending $12 million on this project?'" Since they were already in the process of restoring the two rooms, the NYPL decided to go ahead and replace that mural too.

EverGreene once again came to the rescue by helping the library re-create the existing mural, and then bringing the canvas it was painted on back to the library in two pieces. Those two halves were affixed to the ceiling of the Blass room, and now it looks as good as new. 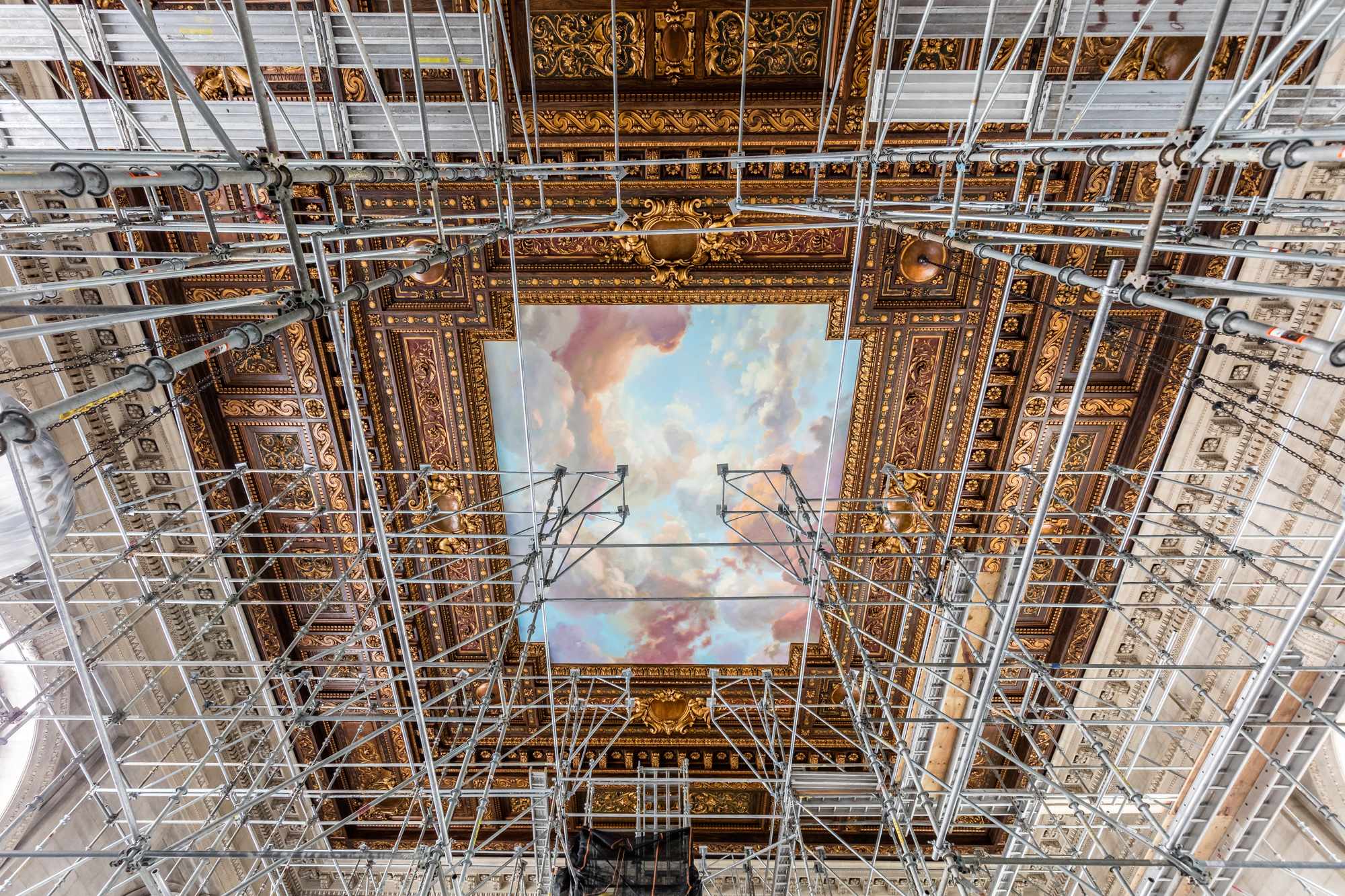 The ceiling of the Bill Blass Catalog Room mid-renovation. Photo by Max Touhey for Curbed.

As construction enters its final phase, the NYPL is conscious of the fact that this is perhaps its most scrutinized revamp of the past few decades—maybe even moreso than its plans to redo the stacks, which has generated its own fair share of controversy. But aside from the NYPL's lions, Patience and Fortitude, the Rose Main Reading Room is the most iconic symbol of the library, and one it's determined to protect. "This is part of the history of the city of New York, and we're very mindful that we're the stewards of this great building, and this great room," says Weinshall.

15 renovation apps to know for your next project

Renovation Week Recap: What You May Have Missed This Week

View all stories in Renovation Week