In Greenpoint, a Brooklyn Restaurateur Adopts a 'More-Is-More' Aesthetic

“I’ve always been a big collector,” says Aaron Lefkove, standing in the middle of his Greenpoint apartment. "Fortunately this place has a lot of space." That's definitely a rarity in Brooklyn, so when Lefkove first saw the two-bedroom after visiting about 20 apartments in the area with a broker, he jumped on it right away. "When I found this place I was like, shit, I’m never leaving," he says with a laugh. He's since spent the past few years making it a home—one that's uniquely tailored to his tastes.

Lefkove is the co-owner of Littleneck, a well-regarded seafood shack in Gowanus, and its more casual sister restaurant Littleneck Outpost in Greenpoint. Lefkove and co-owner, Andy Curtin built the Gowanus restaurant from the ground up about five years ago, and the Outpost in Greenpoint followed in 2014. In addition to overseeing the day-to-day stuff, the pair also collaborated on the decor for both restaurants. "Andy and I are very hands-on with the design of our restaurants," explains Lefkove. "We’re both very good at thrifting and finding things and refashioning them into other things."

But where the design for those spaces leans toward the minimalist, Lefkove's apartment is, by his own admission, the complete opposite. "Maybe the one unifying thing would be ‘more is more," he says of the two-bedroom space. "I like to fill my life with things that bring me joy—cats, guitars, art, books, records … what my life and my home are filled with." 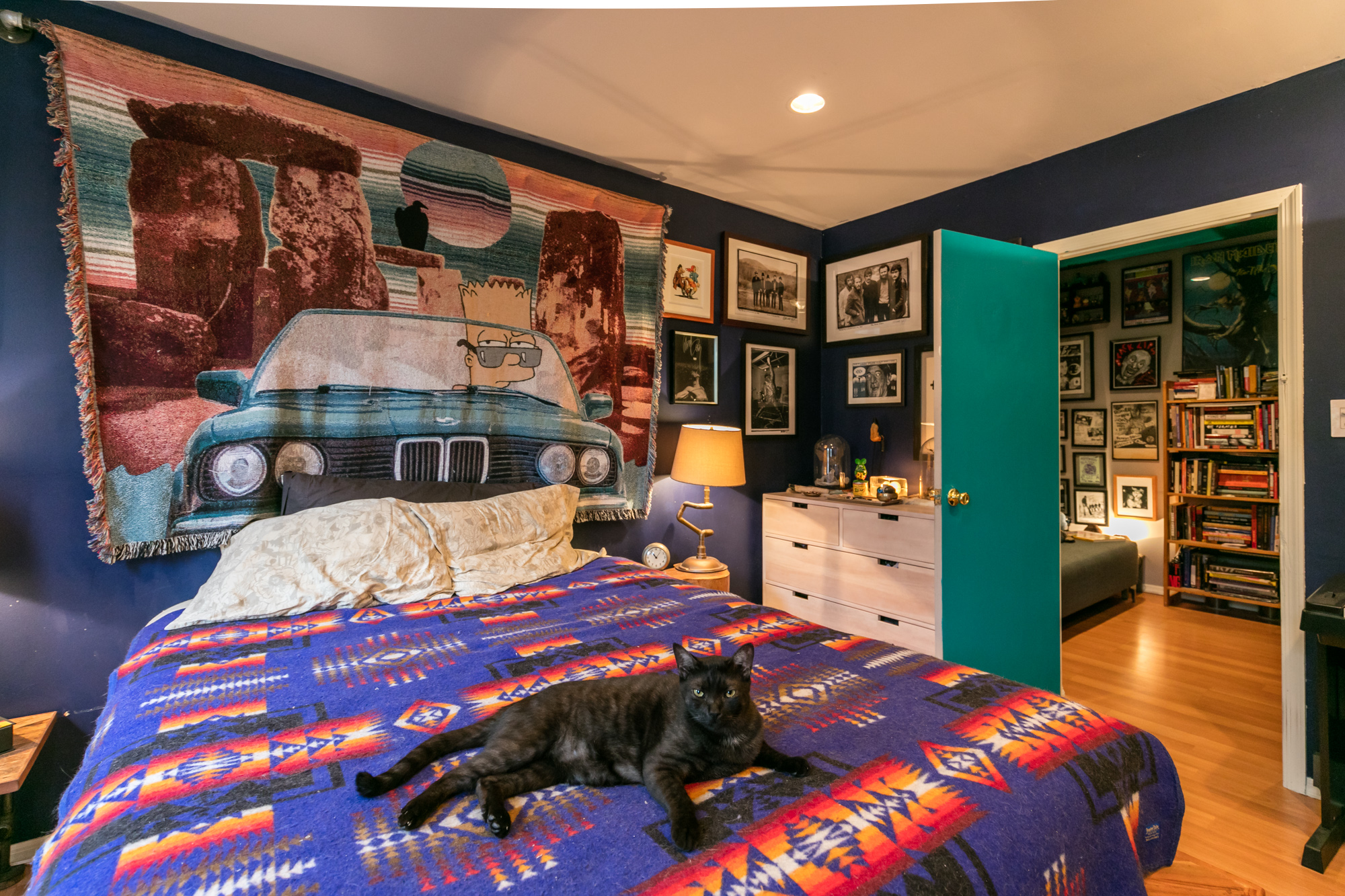 He moved into the apartment a little more than three years ago with his now-ex-girlfriend, and immediately set about transforming the space from what he calls a "white-box apartment" into something more homey. "Nothing in here was any great shakes," he explains. "The only thing you could really do with it is make it very colorful and very vibrant." They painted the walls (a series of bright colors—yellow in the living room, red in the kitchen, etc.), added art and other tchotchkes, and slowly but surely, the space came together. “In my professional life everything is very white and very clean, and then I come home and everything is colorful and very more-is-more," Lefkove says. He now shares the space with his two cats, Buddy and Lamont.

Before opening Littleneck, Lefkove worked at record stores and played in punk bands, and much of the decor in the apartment—shelves of records, gig posters, music memorabilia—reflects that. He also has a knack for DIY projects, and has transformed some of the items in the apartment (including the coffee table, which was once just a raw slab of wood), himself.

But there's also much more to the items in the apartment. Many have sentimental value—either they're family heirlooms, or things that he's picked up on his travels, or have memories of friends associated with them. The abstract yellow-and-black painting that hangs in the living room is one such example; a childhood friend of Lefkove's made it and gave it to him to keep up in the apartment. And there are dozens, if not hundreds, of other pieces that have similar significance. "Everything has a story," he explains. 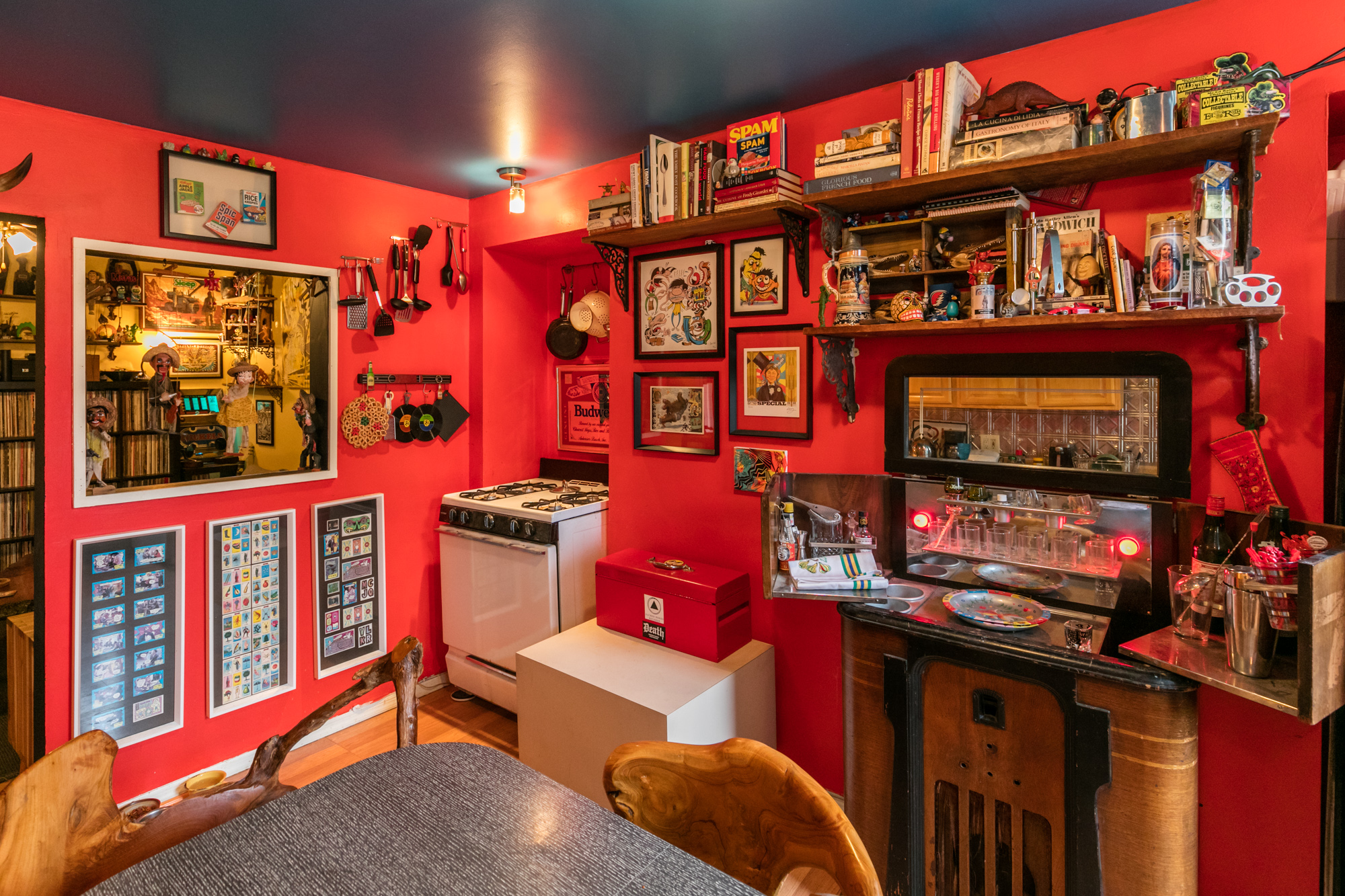 Everything is in its own kind of order, but Lefkove occasionally gives into the desire to change things up—but that's the beauty of having a lot of art and other movable items. "Some days I'll wake up and just decide to rearrange all the art and move everything somewhere else," he says. His collection gets edited down every once in a while, though he jokingly says about the possibility of moving, "Can you imagine what a pain in the ass that is?"

But that's unlikely to happen anytime soon, by his own admission. "I love the neighborhood," Lefkove says, when asked about his favorite thing about this particular apartment. He's within walking distance of the Littleneck Outpost, and he's a short drive (or ferry ride, or subway ride) from the Gowanus restaurant. Not to mention all the time he's spent making the space as comfortable as possible. "I work seven days a week and I like to come home to a home," he explains. “I’ve had other apartments that felt like apartments I was living in, but this feels like home." 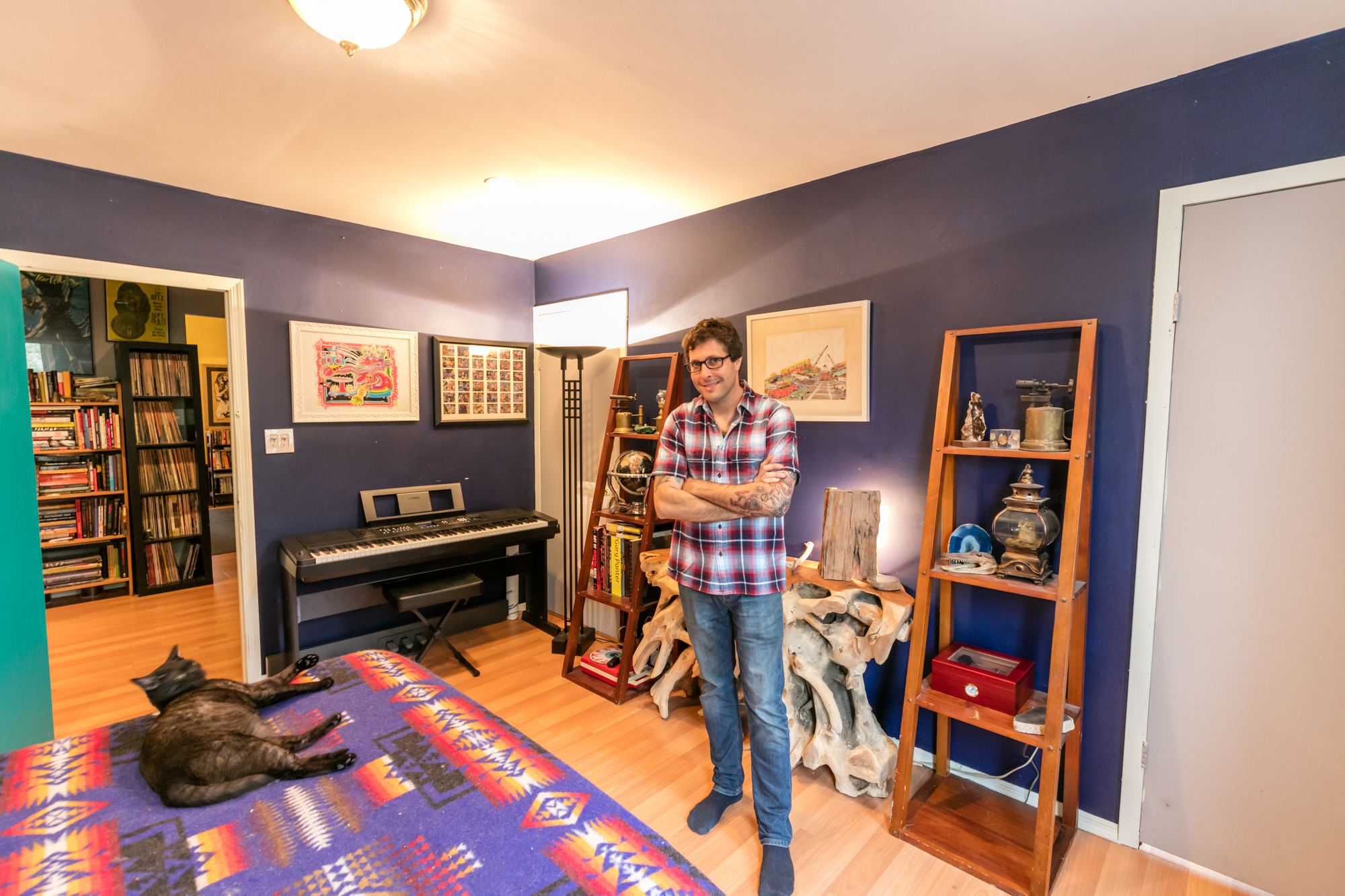