On Governors Island, a Historic Monument Is Prepped For Its Next Century

Placed atop Fort Jay's Archway on Governors Island, the Fort Jay Eagle or the Trophée d’Armes sculpture as it is officially known is now considered one of the earliest examples of a domestically carved monumental sculpture. The Eagle is now competing with 20 other sites nationwide for a grant that will help the monument in its restoration efforts.

In just a few days from now, voting will close on that national competition, which awards grants to historic sites across the country for preservation and restoration work. And the Fort Jay Eagle has some stiff competition, especially considering the fact this is essentially a popularity contest with grants being awarded to the sites with the most number of of votes.

So who is the Fort Jay Eagle up against? — Yellowstone National Park, Mount Rushmore National Memorial, and the Grand Canyon National Park just to name a few celebrity candidates. And that’s why, the Friends of Governors Island (FGI), a non-profit group that runs the island’s volunteer and membership programs, and promotes improvements to the space, has been actively campaigning the last few months to get this little known monument seen and recognized. 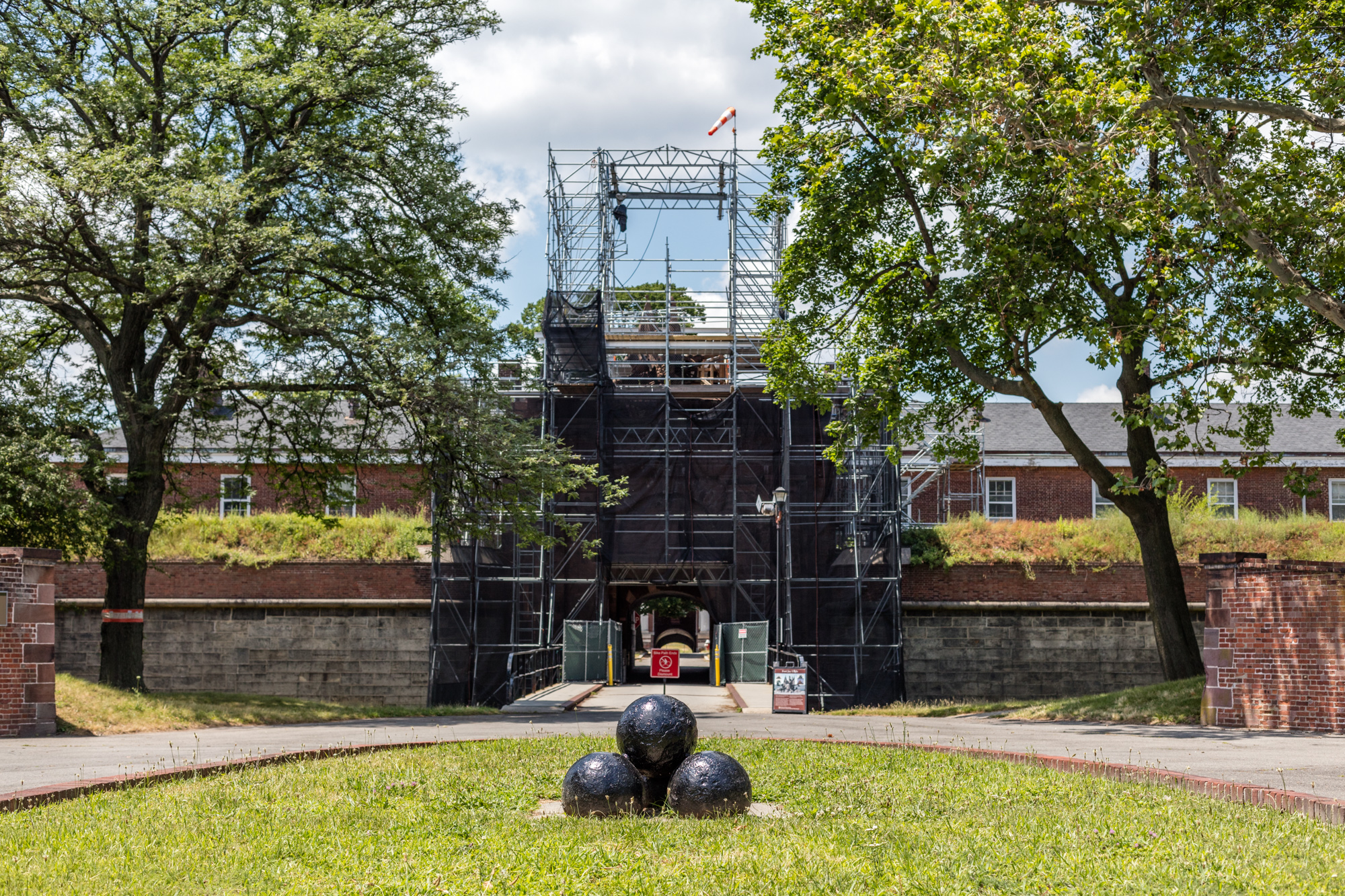 Curbed got a chance to tour Fort Jay, which along with the nearby Castle Williams was declared a national monument in 2001 as part of the larger Governors Island National Monument. Accompanied by members of the National Parks Service, one of the historic preservationists working to restore the Eagle, and the executive director of FGI, Merritt Birnbaum, we also got to climb up the scaffolding, to the top of the archway in front of the fort, where work on restoring the Eagle has been underway for the past year.

Formally known as the Trophée d’Armes sculpture, the sandstone eagle was likely designed by a French sculptor and placed atop the Fort Jay Archway that was designed by Joseph Mangin, the architect who also designed City Hall. While the archway was built in 1796, the Eagle sculpture wasn’t entirely completed until some years after that, but it is still seen as one of the earliest examples of a domestically carved monumental sculpture across the United States.

And sitting atop that grand archway, the Eagle has been witness to some of the most important moments in American history. The British occupied the earliest fort-like structures on the Island during the American Revolution, until they surrendered it in 1783. In the 20th Century, Fort Jay served as a base for the U.S. Army, and subsequently as a base for the U.S. Coast Guard until they too left in 1996.

Over the 200 plus years of its history, the Fort and Eagle have sustained significant damage but with the Army and Coast Guard stationed there, there was still a degree of upkeep and restoration work on the Eagle. But it was only when Governors Island opened to the public in the early 2000s did most people become aware of the structure and the historic nature of the Fort Jay Eagle, particularly preservationists who were eager to restore it. 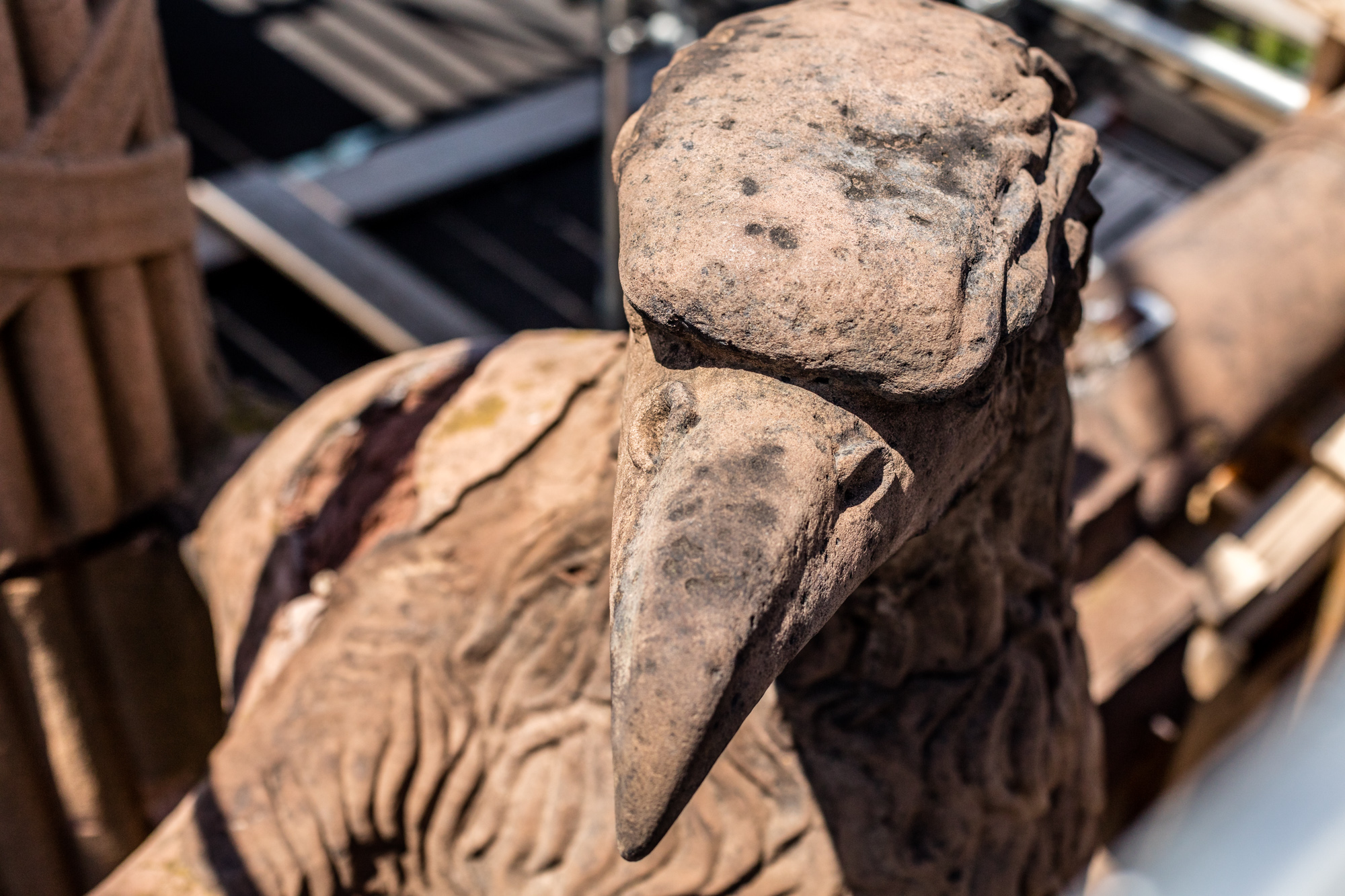 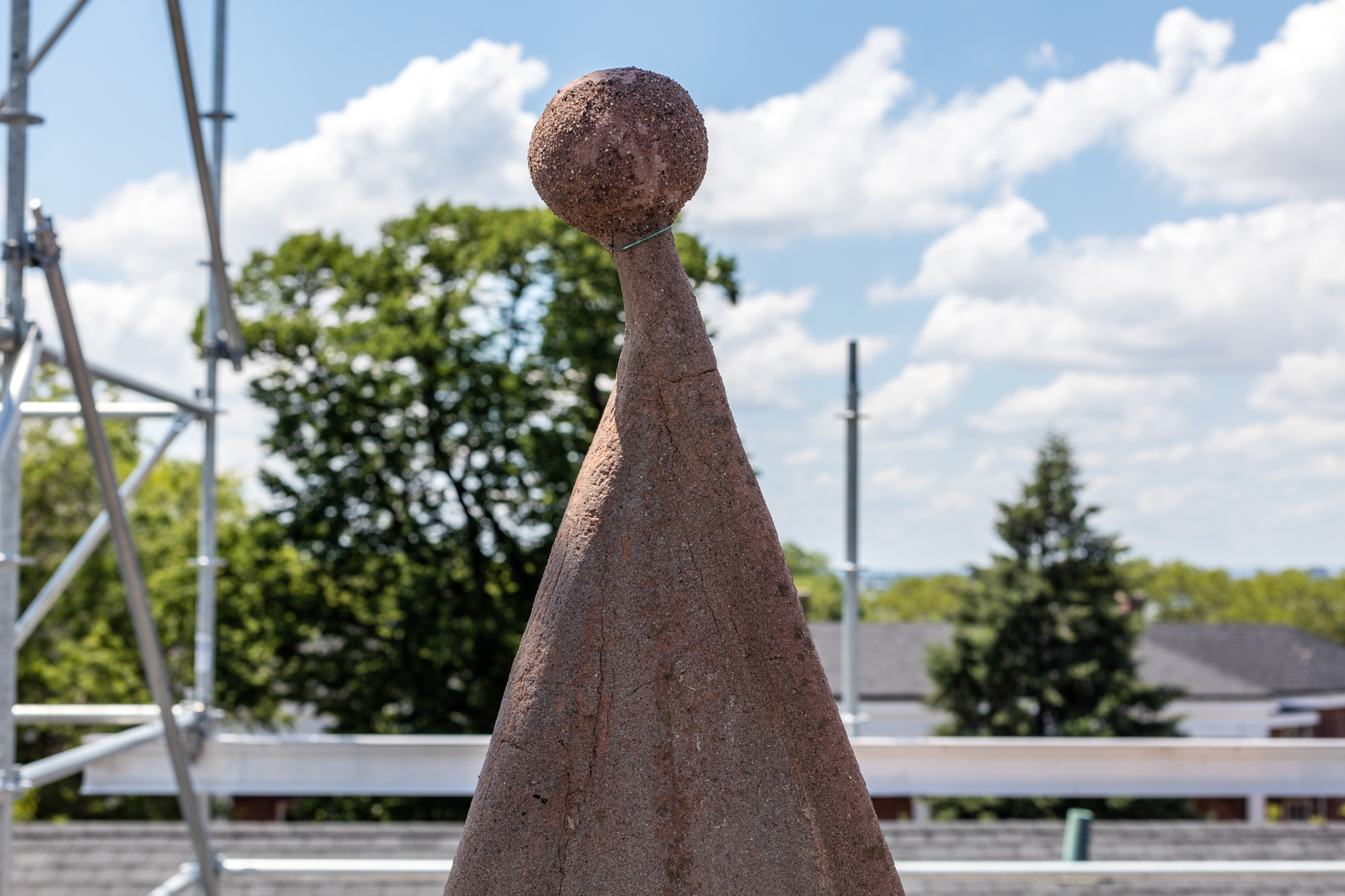 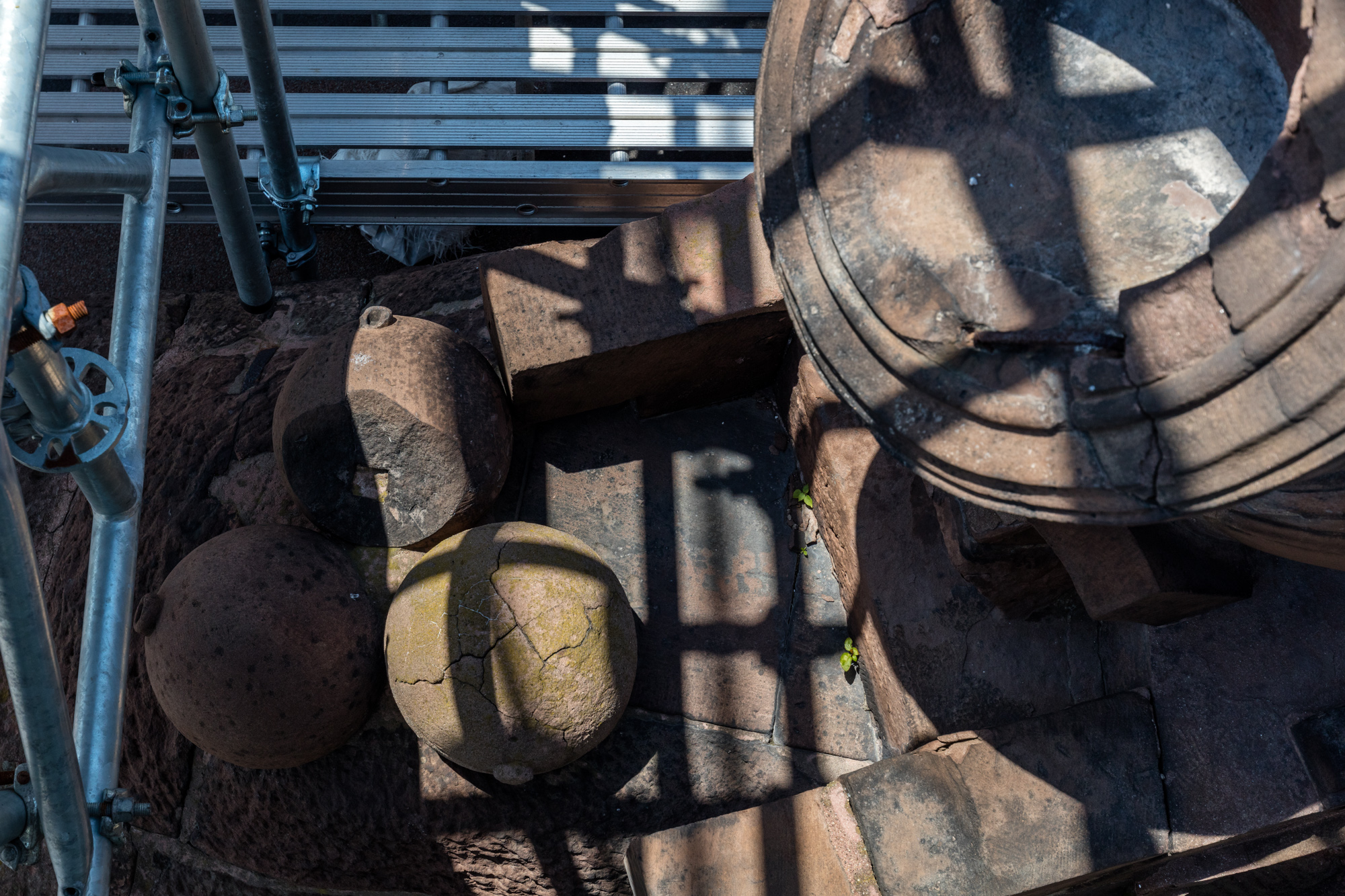 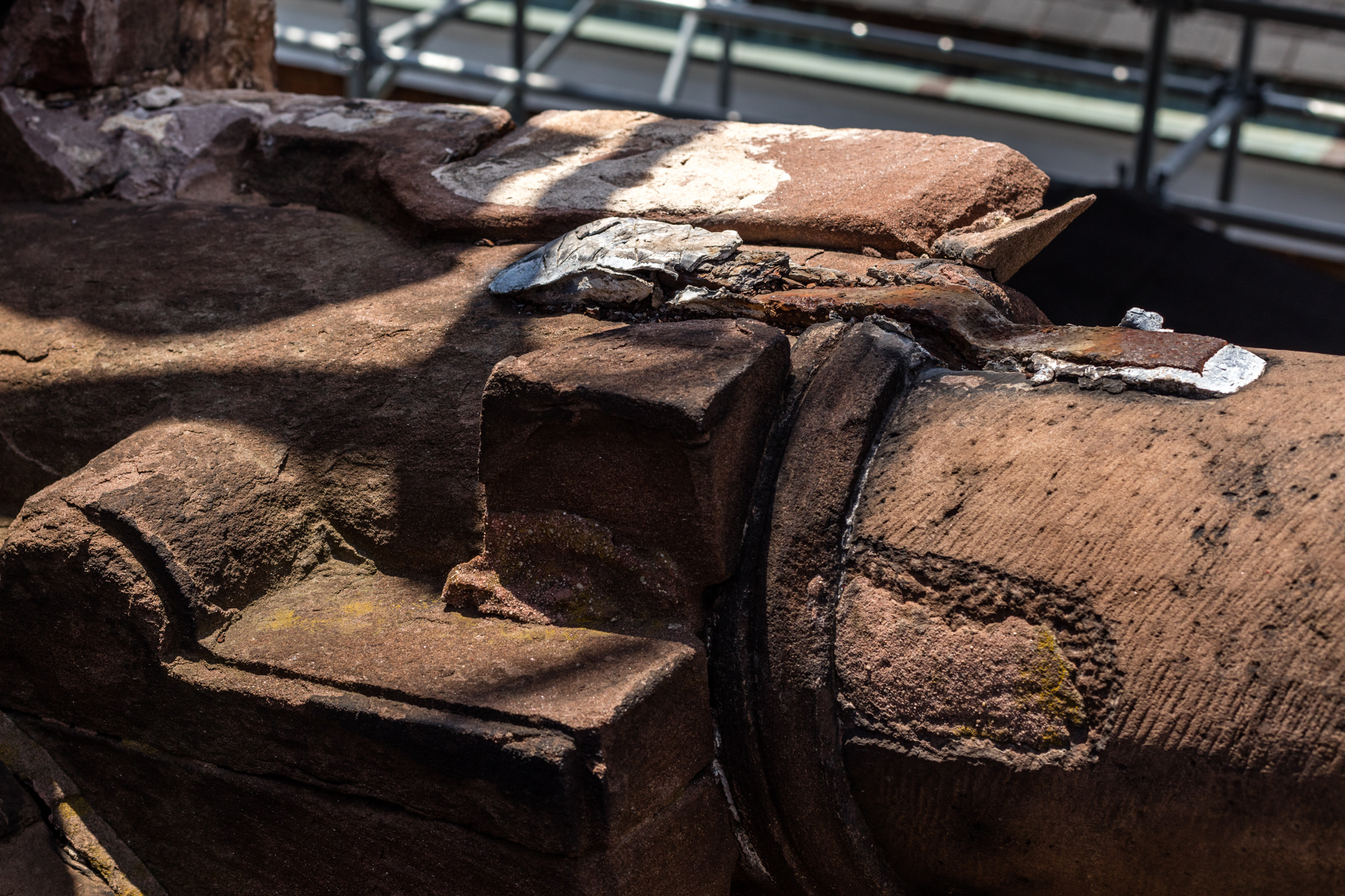 However Hurricane Sandy dealt a major blow to the restoration efforts in October 2012 — the sculpture at the time was in midst of a renewed effort for restoration, but the superstorm significantly damaged the eagle, breaking parts of the wing, and shattering other parts of the sculpture into hundreds of piece — preservationists of course, kept all of them, and a group has been working tirelessly over the past year to carry out the first phase of restoration.

The sculpture is comprised of different cuts of sandstone, and for this new push, the team was able to procure salvaged stone from the Smithsonian. Other material has been shipped from places like the UK, and sculptors use large chunks of sandstone to form a rough outline for the piece they’re restoring before working on the fine details.

The National Trust’s competition will award each winner up to $250,000, and that money will go towards the next phase of restoring this historic sculpture, which apart from the eagle also includes several pieces of artillery, flags, and a seal that closely resembles that of New York State. Since the competition got underway in May this year, the Parks service has been organizing several trips for the public to get a closeup view of the Eagle with the last one scheduled this weekend, and so far they've received a very positive response.

"We’re the David against the Goliath," Merritt Birnbaum, the executive director of the Friends of Governors Island, said of sculpture’s chances of winning. "Sandstone is very delicate and very few people in the people still practice the art of carving, and we’re incredibly fortunate to have found this amazing team. It is extremely important to us to see this sculpture preserved and not have it disappear completely."

The public can get involved by visiting savingplaces.org/partners-in-preservation for more information and voting daily through July 5 at VoteYourPark.org

Governors Island will have expanded hours, a new ferry this year