Zack Praskin was determined to live in a Park Slope brownstone. He had lived in a railroad apartment in the neighborhood for five years, and when it came time to move, he was certain that his next place would be in one of the neighborhood's sought-after brownstones. But then his husband, Will, showed him a listing in Dumbo that he really wanted to check out.

"I remember I said to him, 'No way! Are you crazy? We can't afford to live in Dumbo,'" Praskin recalled recently. "I started a fight over it, but long story short, we got a good deal on this apartment, and decided to take it. So that's how we found this place: through a fight."

But it was quite the Herculean effort getting to that decision. The couple looked at least 50 different apartments, Praskin says, focusing primarily on Park Slope but also looking at homes in Prospect Heights, Clinton Hill, Carroll Gardens, and near Green-Wood Cemetery.

When they finally settled on the one-bedroom condo in Dumdo, Praskin knew he had to bring a little piece of Park Slope with him — and so he did, literally. 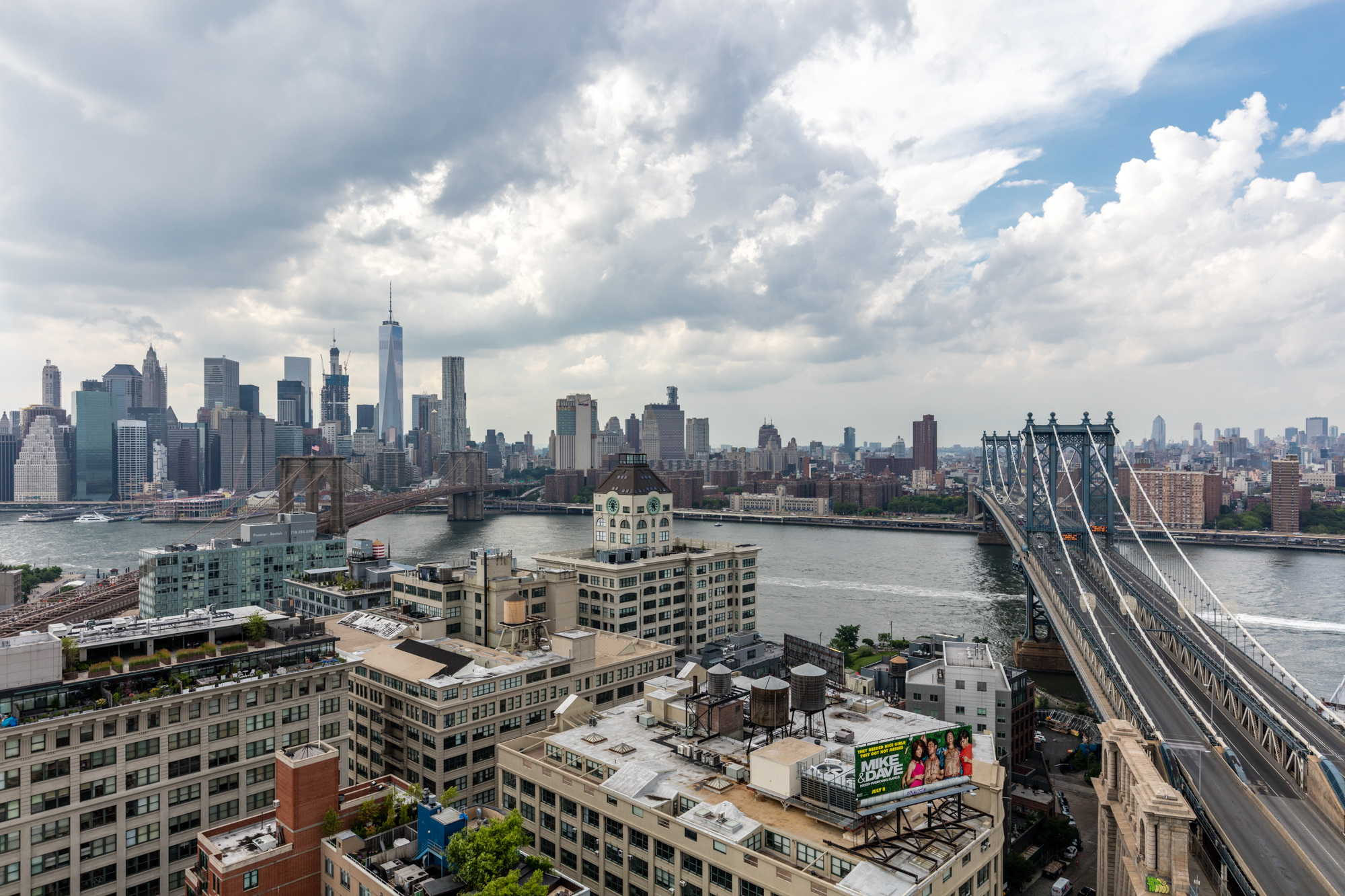 But that piece isn't quite so small. Praskin found a mantelpiece from an 1890s brownstone in Park Slope for sale on Craigslist, and he instantly snatched it up. And so began the process of constructing a faux fireplace in the new Dumbo apartment. It was an idea put forth to him by his cousin who works as a designer in Los Angeles.

"That's kind of my baby, and I'm really proud of it," Praskin says of the fireplace. "I can't say it was my idea, but I picked out everything and I put it together."

The project turned out to be more challenging than he first imagined: After fitting the mantelpiece on to the blank wall, Praskin realized he hadn't left room for the mirror that currently occupies the fireplace area. He was going to have to redo the whole thing, but then he found that there was a gap at the back of the mantelpiece, and he slid the glass right through. But he noted that those missteps were all part of the process.

The apartment is stocked with several other antiques that offset the modern finishes in the condo, all done with the intention of trying "to balance the contemporary and the traditional." The dining table has a brass wok from India that's currently being used as a fruit bowl. The bright red umbrella stand at the entrance is a piece Praskin acquired from his grandmother, and it has been in the family for decades. An antique cheese dish sits atop one of the shelves in the kitchen, and a vintage shaving kit offsets the modern glass shelf in the bathroom — and those are just a few examples of the play between the old and the new can be seen throughout Praskin's home. 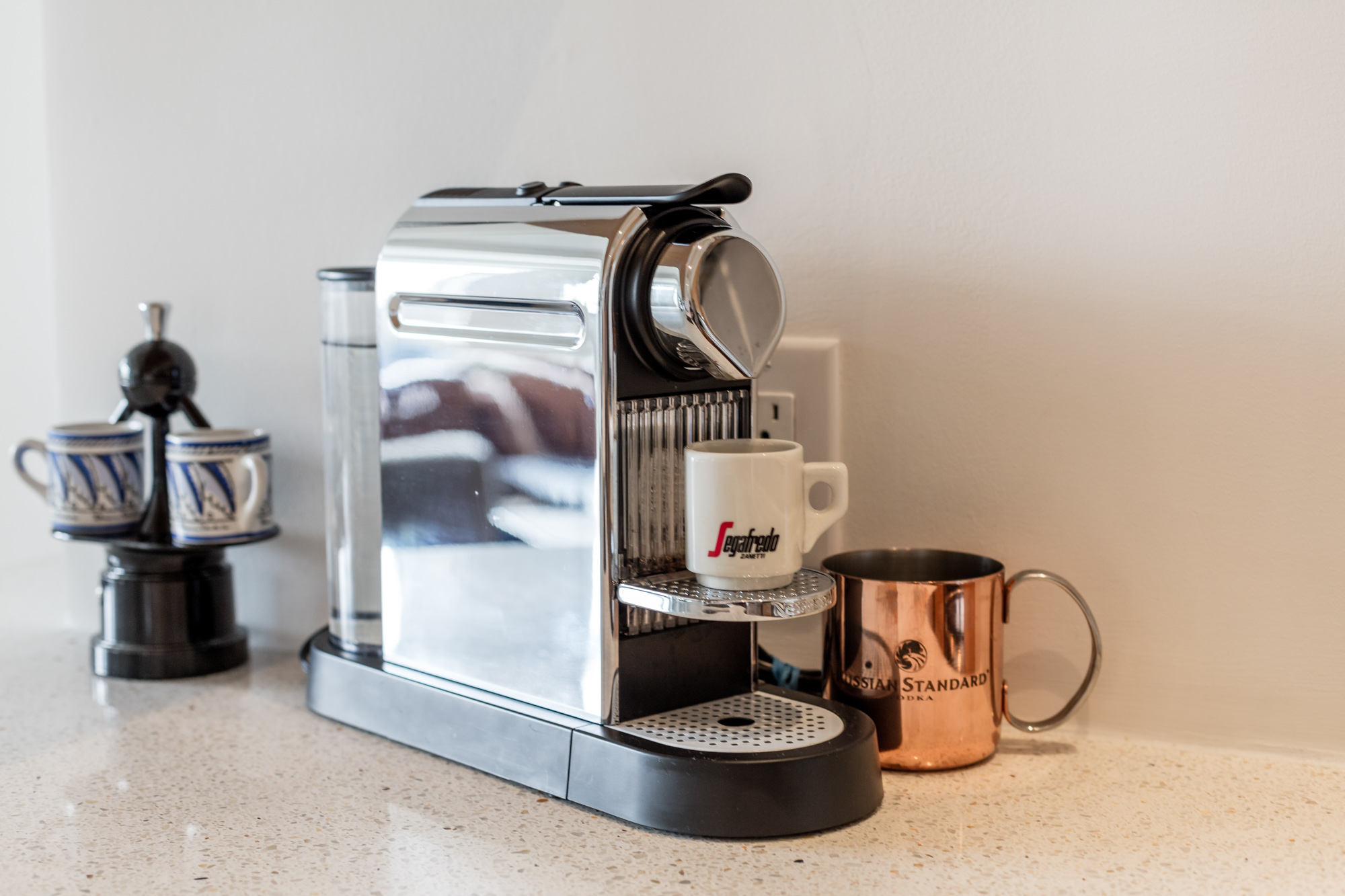 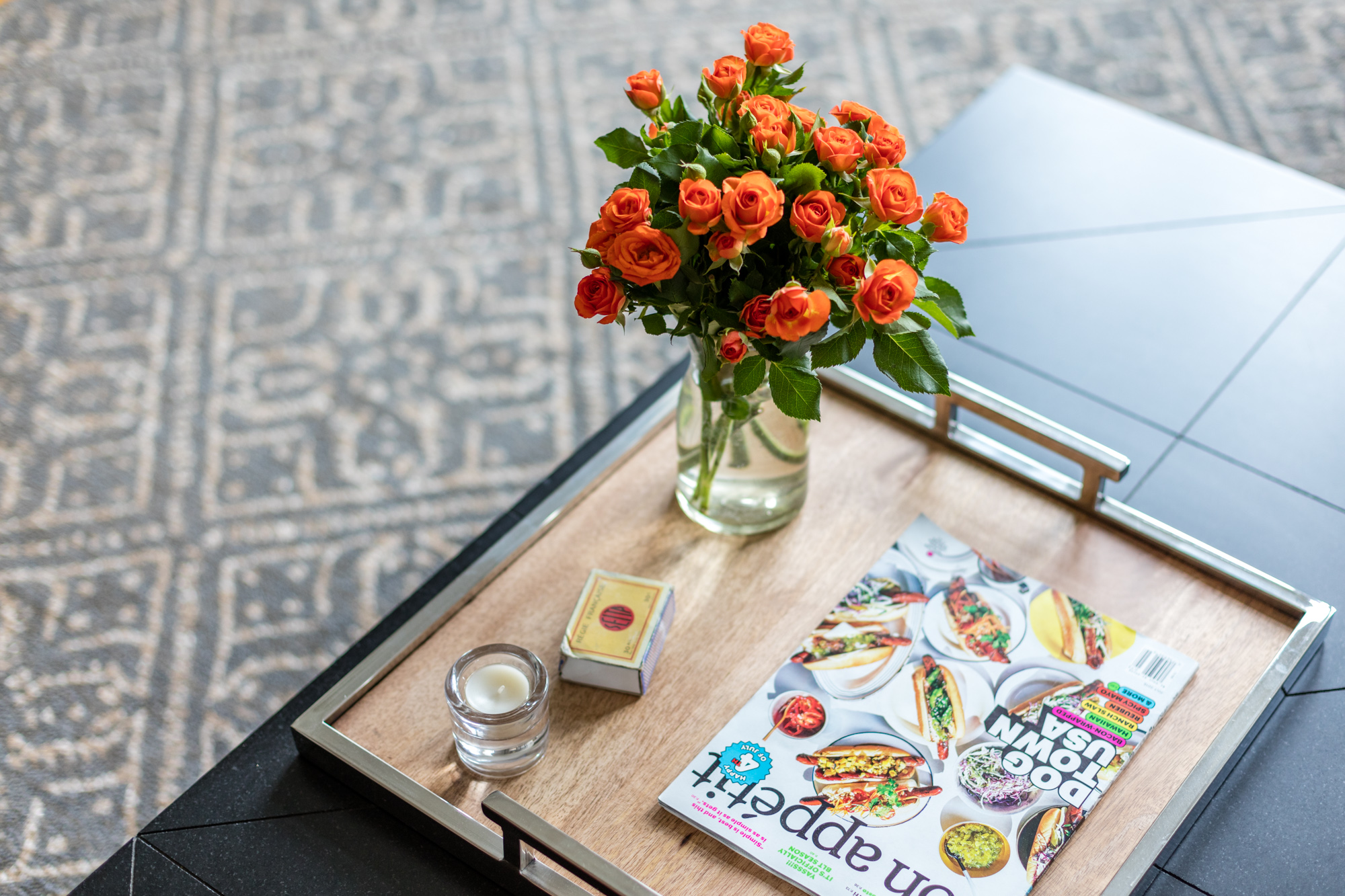 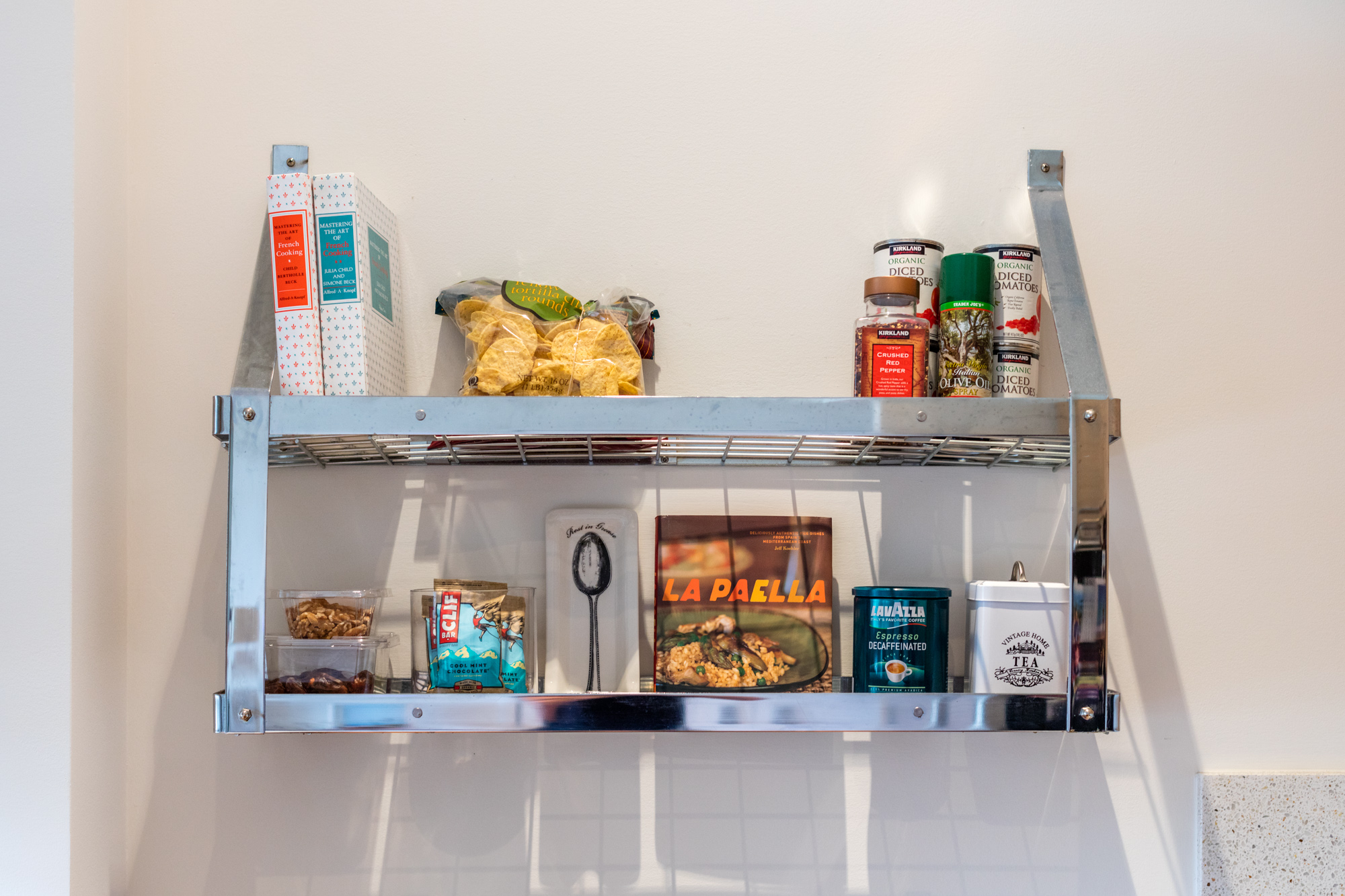 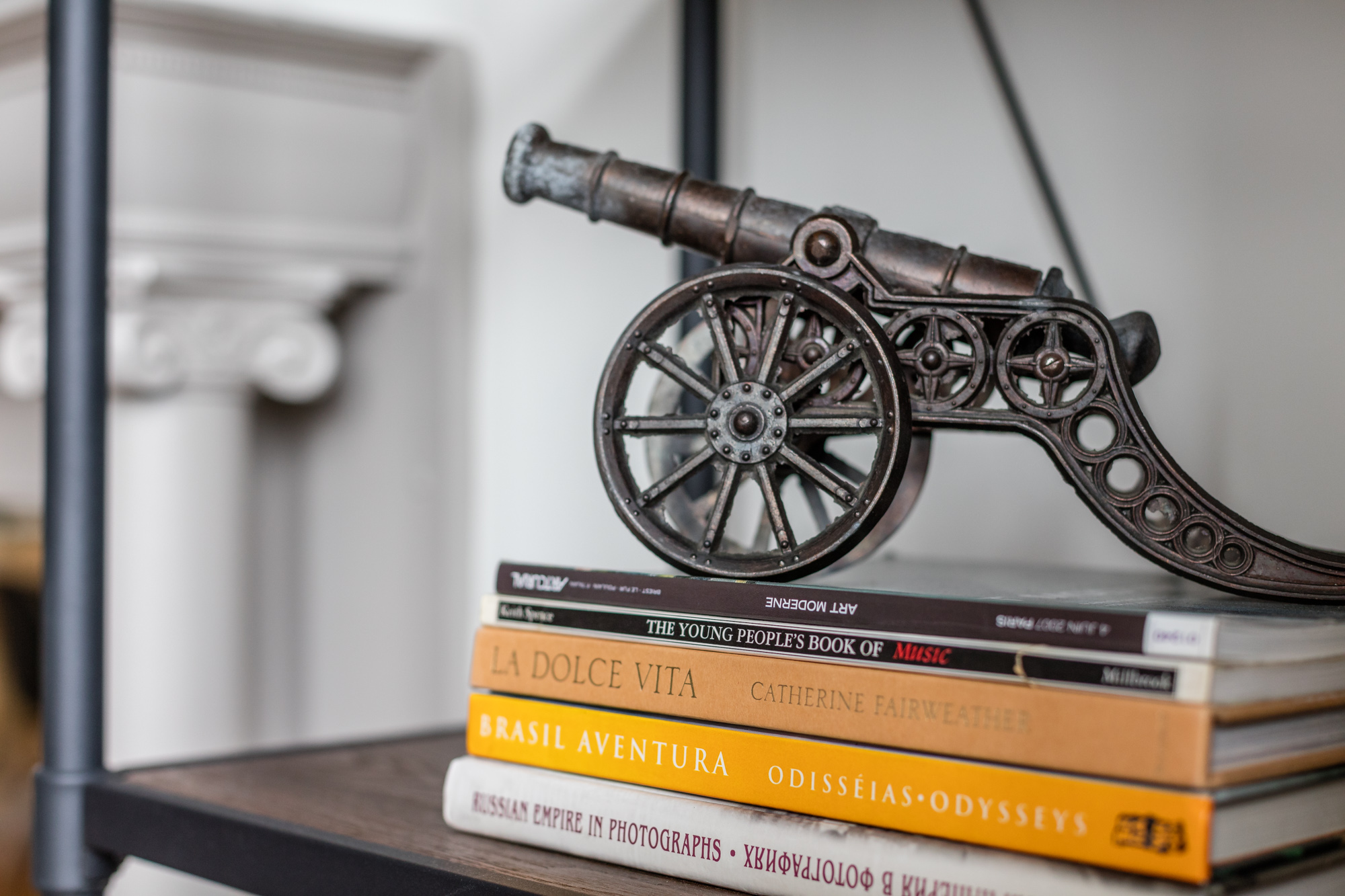 Praskin put the most amount of effort into the living room. He works as an ESL teacher in Sunset Park, and likes to come back to a calming environment. Instead of spending thousand of dollars on artwork, he covered the walls with photographs of his travels across the world — and yes, they're placed in inexpensive Ikea frames. He also bought a Fiddle Leaf fig tree to liven up the space, despite admitting that the choice is a little cliché. "I know it's not original," he says. "I know everyone in the neighborhood has one, but I just like having a tree in this space in general."

Praskin also combined different textures in the space — "it's mostly modern, but there's fabric, metal, and wood," he explains. With the other spaces in the house, he took on a more relaxed approach, and if you were wondering how much Praskin's husband contributed to the design aesthetic of the home, he has an answer for that too. "It's 100 percent me," he says with a laugh. The other things he loves about his apartment are the high ceilings; the two sets of double-paned windows that completely block out the sound from the trains moving along the Manhattan Bridge and the traffic below; and the spaciousness of the layout. The views from the roof deck of the building were one of the biggest selling points for Praskin when he moved into this apartment eight months ago.

"I've never seen a view of the city like the one I get here on the roof," he says. "You can't get something like this in Park Slope."

Praskin was born in Manhattan and grew up in the Bronx; this is the second home he's owned in the city, and for him the neighborhood played a key factor in making the final choice. Even still, he sees his neighborhood options are somewhat limited — right now, he says, there's one of everything, "one dry cleaner, one deli, one nail salon," he explains. He's looking forward to the changes coming to the neighborhood in the next few years, including a forthcoming Wegmans store and the opening of Empire Stores along the waterfront.

"I loved living in Park Slope," Praskin says. "Everything seemed bigger, there were more restaurant options, and Prospect Park was my backyard. But now I have Brooklyn Bridge Park, there are so many changes going on in this neighborhood, and it's so close to Manhattan — it makes getting into the city so much easier."