It was 1 p.m. on a rainy Wednesday this spring when Mickey Vedic, a scrappy 48-year-old artist from the East Village walked briskly, almost ran, into the Mobil gas station on Eighth Avenue and 13th Street in Greenwich Village.

"Are you staying open?" he says, nearly out of breath, to the man behind the counter. "You’re not going anywhere, are you?" The gas station’s owner, Athanasios Hondros—who goes by Tommy—gives him the answer: no, most definitely not. Satisfied with Hondros’ answer, Vedic proceeded to buy some some M&Ms and leave. But despite the simplicity of the task, the air was heavy with anxiety; there was a weight to everyone’s words.

The pace at which change occurs in New York City makes everything feel like it could be gone tomorrow, and so the mundane actions of businesses that many people take for granted—the dry cleaners, corner bodegas, and the gas stations—become suddenly memorable. It makes Tommy Hondros’ M&M-scanning and bill-breaking and small-talking come with a kind of gravitas, like they represent something more than the everyday tasks of a gas station owner.

You don’t know how many people call me a lifesaver. If I close, where are they going to go?

And they kind of do, because Hondros plans on being the last gas man standing in New York. "If I close, where are they going to go?" Hondros said. "You don’t know how many people thank me. They call me a lifesaver."

This spring, when a station on Houston Street that had been in continuous operation for eight decades closed to make room for a glass-clad, seven-story office building, Hondros’s Mobil became the only gas station left below 23rd Street in Manhattan. The next closest stations are on Eleventh Avenue between 29th and 30th, and 23rd Street near FDR Drive. There are still 50 gas stations left in the borough, but that’s down from about 80 eight years ago; fewer than 12 of those are located below 96th Street. 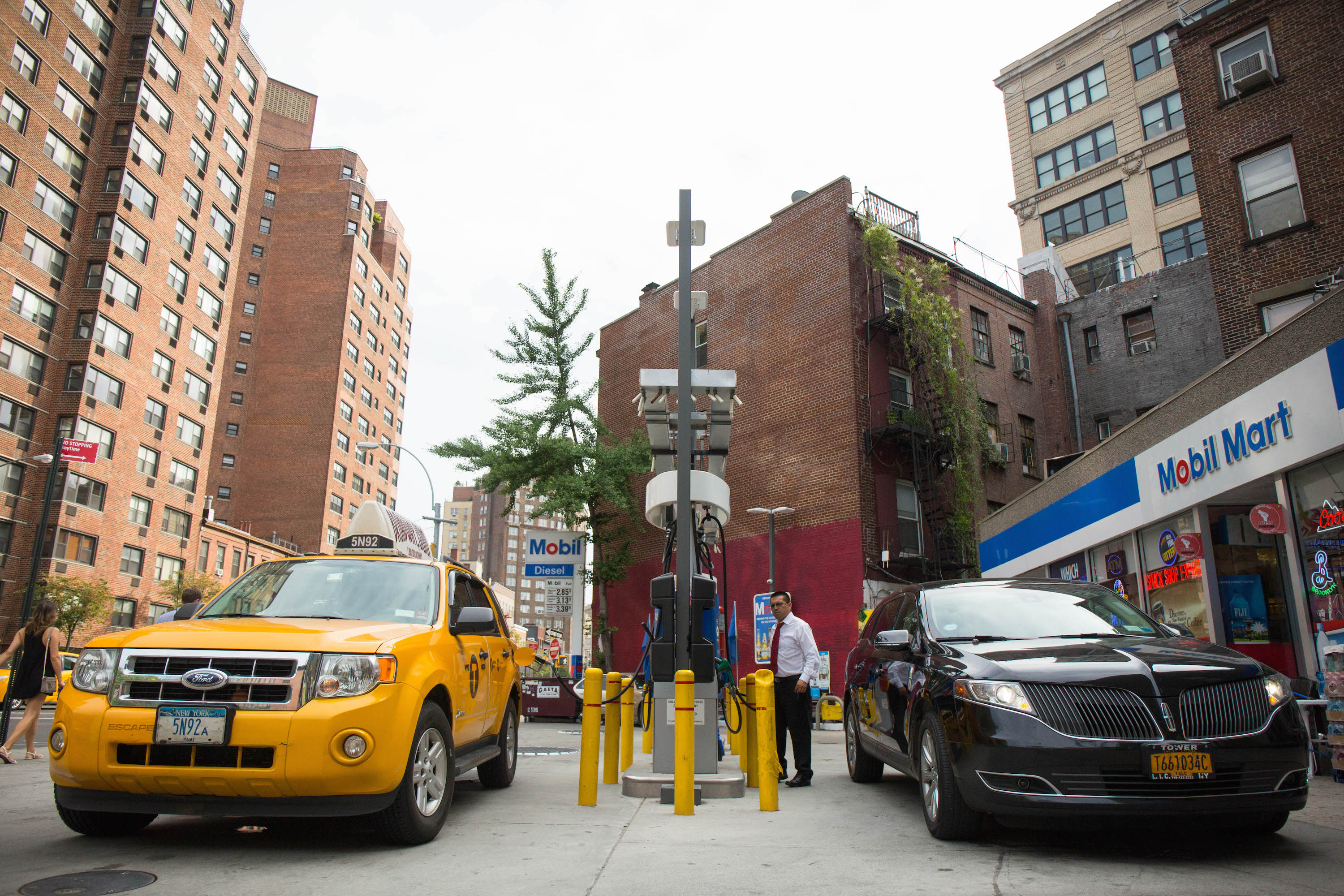 The problem with gas stations in New York is simple: they're worth more when used for pretty much anything other than gas. It’s not a new conundrum: In 1985, one developer was quoted in the Times saying he wouldn’t buy apartment buildings, only garages, parking lots, vacant land, and gas stations, which are relatively cheap and easy to demolish. And unlike housing or community gardens, their disappearance doesn’t typically elicit protest.

But with real estate prices so high and vacant land virtually nonexistent in Manhattan these days, things seem to have reached a tipping point. The BP on Houston Street was worth $100,000 four decades ago, but its land value is much greater now—as is its value as office space. In 2013, a Getty in Chelsea sold for $23.5 million and is now being converted into luxury condos. The Mobil that used to be down the street from Hondros’ station in the Meatpacking District sold for $60 million back in 2008, and was turned into an upscale retail outfit.

The trend is taking hold elsewhere in the city, too: up in Harlem, Central Park’s last apartment-free corner was recenlty converted from a gas station to a condo building. In Brooklyn, gas stations are closing left and right, from a former Shell station on Atlantic Avenue in Cobble Hill (which is becoming a 10-unit "boutique" condo) to a 133-unit apartment building replacing a station on Eastern Parkway in Crown Heights.

Hondros bought the gas station three years ago (with his father, who also owns three gas stations in Brooklyn) after the Lukoil that used to operate on the property shut down. He wouldn’t reveal how much it cost, but he claims that he gets offers for the land nearly weekly—men in suits with manila envelopes offering $50 or $60 million (allegedly) for this triangle-shaped sliver with four gas pumps. That would give Hondros enough to live a nice life, which makes you wonder: Why is he still here?

To understand that, you have to understand Tommy Hondros. Nearly every weekday, and many weekends, he pulls up in his gold Mercedes sedan that he drives from Bay Ridge, where he was born and raised. The windows on the car are tinted, but you can make out a collection of fitted caps with different sports teams’ logos in the back window. On the day we met, he wore Nikes, an oversized T-shirt, and basketball shorts, in defiance of the cold drizzle. At 28, he could be mistaken for DJ Khaled’s younger cousin. 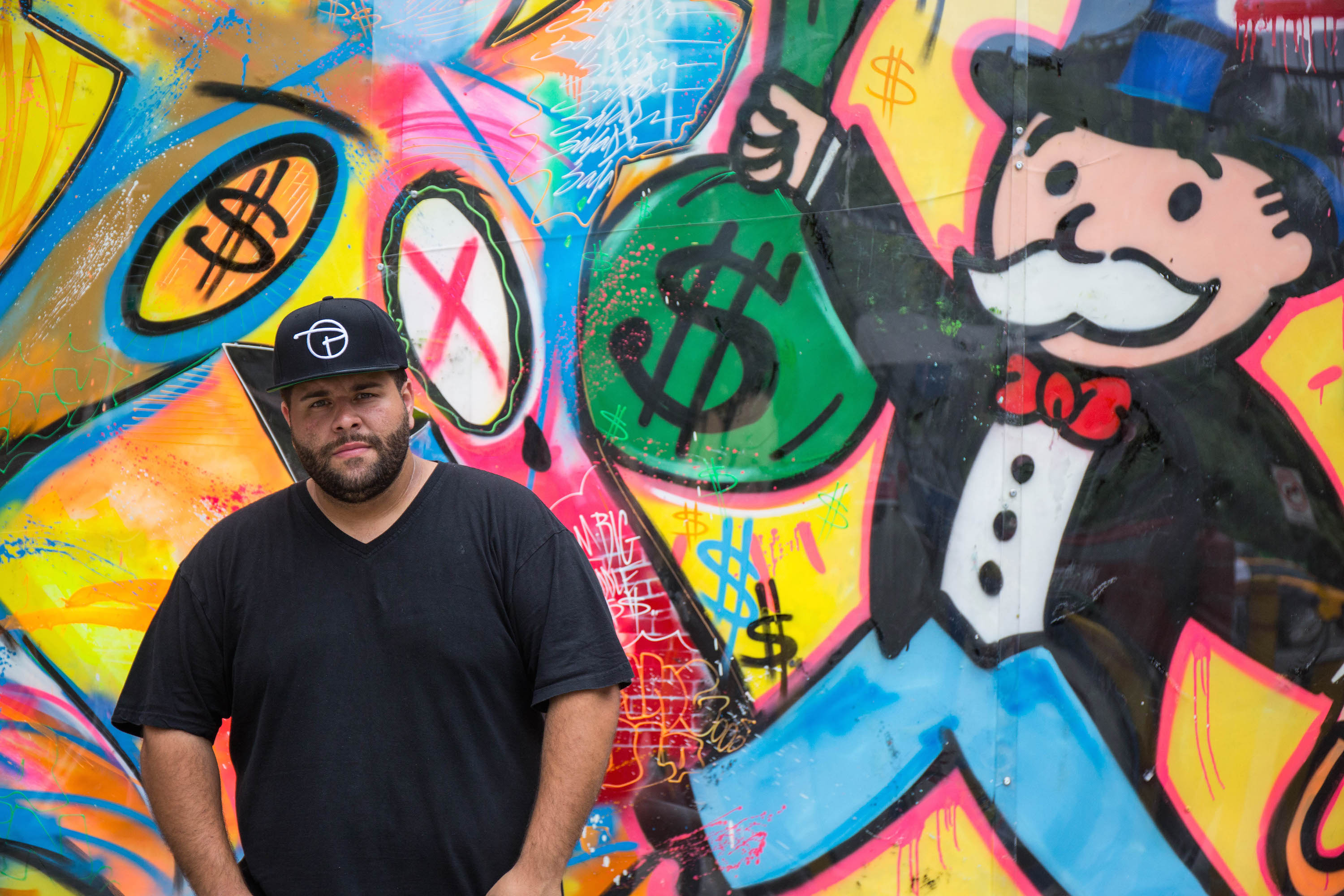 His demeanor is perfectly suited for the casual, yet fast-paced environment of the gas world. He’s there almost every day, working between eight and 15 hours, selling candy and Red Bull and water, listening to the same pop songs on the radio over and over again through the crappy speakers on the shelves above him. He makes a point of joking with nearly every customer who comes in. He told one woman who was subduedly dancing to the radio as she perused the store’s drink cases that she should go to the club; he teased a guy buying $100 worth of Powerball tickets for doing something as stupid as buying $100 worth of Powerball tickets. "If your customers love you, your day goes by like one, two, three," Hondros said as he took the man’s money.

Inside the store—which looks like a New York-sized (see: cramped) version of any gas station—it's usually calm. But outside it’s a mess. One of Hondros’ employees, usually Mohammad Rehman, acts as a herder of cabs (about 90 percent of the station’s business) and other cars. The station is open 24 hours a day, seven days a week, and at night (especially on weekends), things can get rowdy. Hondros said he’s had to break up fights before as people leave clubs and get impatient at the pumps. 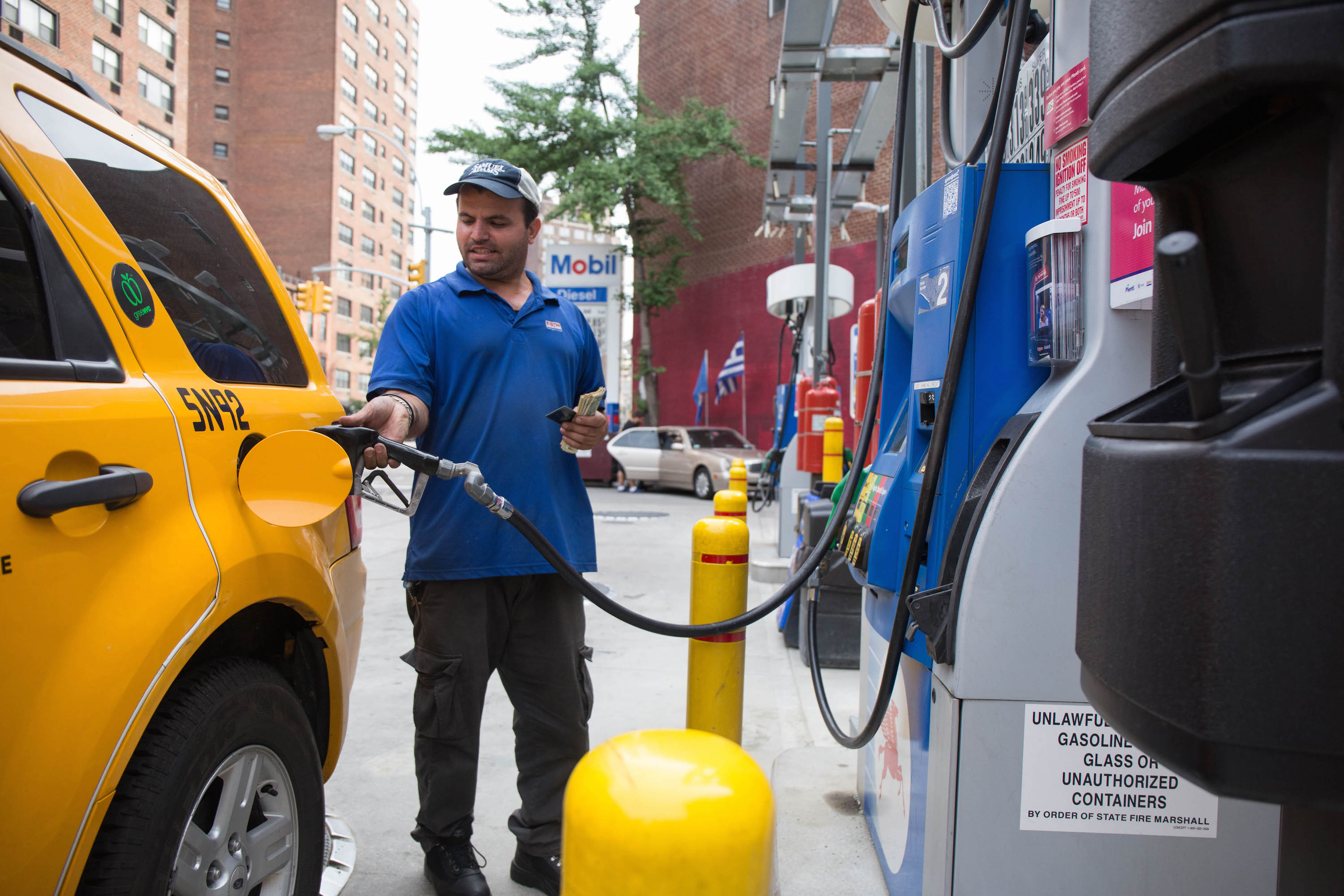 The rush hour here used to be from about 2:30 to 7 p.m., but now, thanks to the dearth of other downtown options, it starts even earlier. By 2 p.m., cars might be lined up all the way down Eighth Avenue, blocking the bike lane and cutting off crossing traffic. People wait as long as a half hour (or more) for a chance at the pump, while Rehman runs around taking money, filling tanks, and interrupting customers mid-sentence as soon as he hears enough to know what he needs to do next.

Between Rehman’s manic energy and Hondros’s laid-back jokesterism, customers here seemed content with waiting. Hondros implored me to ask the various regulars about the service he provides. Yes, the lines are long, but it’s essentially the only option if you’re in the downtown area. There are a few gas stations in midtown, but according to patrons, it’s often quicker and cheaper to go to Brooklyn or Queens than to try and maneuver from downtown to uptown. "This one, if it closes, it’s very bad," one driver named Mohammad Kadery said. A man in an Audi on his way to Westchester said he’d searched for 40 minutes, running on fumes, before finding Hondros’ Mobil.

Watching car after car line up to fill up the tanks, you get a sense of why, precisely, this outfit is so important to its customers. But it doesn't necessarily explain why Hondros keeps it open with so many manila envelope offers waiting for him. He doesn’t see himself as a public servant; he seems to get enjoyment from the routine, from sitting on his wood stool, talking with the regulars. But according to him, he doesn't do it out of love. He does it because it’s the thing he does.

Hudson Yards: A guide to the megaproject’s biggest buildings