Terminal Warehouse is revised as its neighborhood changes once more

From the Eleventh Avenue railroad that created an industrial zone near the Hudson River to the ambitious post-September 11 rezoning of the neighborhood that paved the way for Hudson Yards, much has changed on Manhattan’s Far West Side over the last century. But one thing that’s remained the same—at least in its dominance of the block bounded by Eleventh Avenue and the West Side Highway and 27th and 28th streets—is Terminal Warehouse.

Through its modern glass main doors, framed by a large brick arch, is a cavernous domed central hallway that runs through to the end of the block. It’s a curious sight in a city where floor area is a precious commodity. But the hallway wasn’t always as devoid of inch-for-inch functionality as it is today.

Daytonian in Manhattan explains the coming together of the bulky structure,

In 1890...George B. Mallory designed a 7-story brick behemoth that somewhat resembled a hulking fortress. Using what has been called the ‘American Round Arch’ style, he melded what was actually 25 separate buildings into a unified structure. The gigantic edifice, completed in 1891, enclosed a full 24 acres of warehouse space within what the AIA Guide to New York City would, over a century later, call 'somber monumentality.’

Once a loading station for trains carrying freight up and down the northeast, the central hallway of Terminal Warehouse allowed New York Central trains operating on street level to pull directly into the building from Eleventh Avenue, and Erie and Lehigh trains to pull in from Twelfth Avenue. There, their freight would be whisked off and stored in the building’s array of storage facilities or reloaded onto a train that would take it to its next destination. 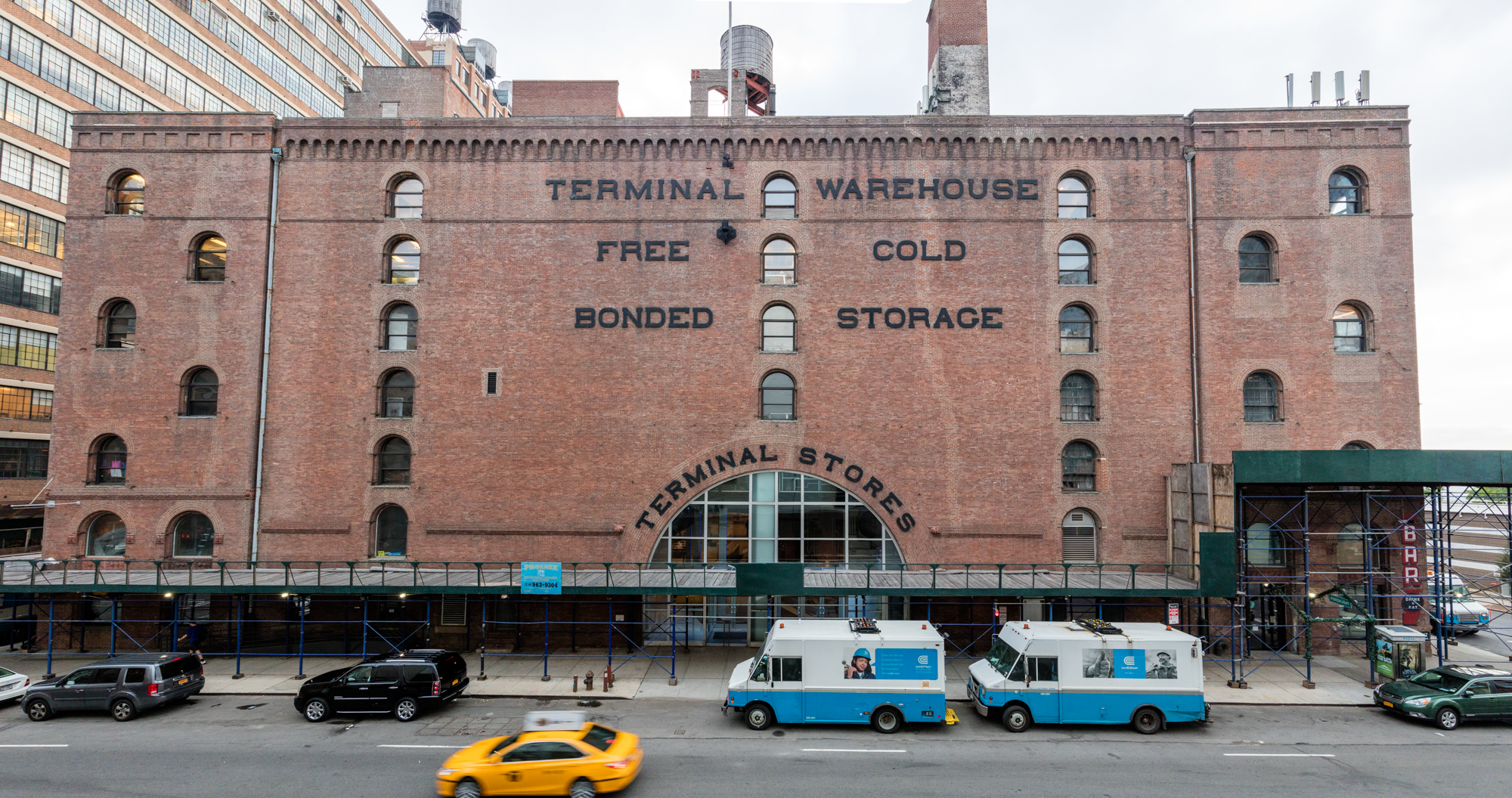 With the collapse of the Eleventh Avenue rail line, much of the business keeping Terminal Warehouse afloat dissipated. In 1983, a group of investors purchased the building, bringing to it one of the city’s most fabled clubs, named aptly for its location: Tunnel. The club kid hangout immortalized in American Psycho and Kids creatively reused Terminal Warehouse’s facilities. The storage rooms once used to hold grains and other goods became home to small parties unto themselves, each with their own wild theme. Tunnel shuttered in 2001 after mounting pressure from the city—this was the Giuliani era, after all.

The art galleries spreading across Chelsea began to claim space along the tunnel’s store rooms-turned-storefronts. While only a few galleries remain in the tunnel today, the vision for Terminal Warehouse is shifting as the neighborhood around it changes once more.

Jon Eisen, co-owner of catering service and eatery Between the Bread, opened an outpost in the tunnel in March. His storefront is part of Terminal Warehouse’s $50 million rehab and the tunnel’s larger redevelopment as a food, retail, and office destination in the proximity of Hudson Yards.

On a recent tour of the space, Eisen—who functions as the unofficial mayor of the cavernous hallway—said that "there’s a certain kind of elegance we’re trying to derive out of the tunnel." With its abundance of brick and industrial vibe, Terminal Warehouse is gunning to emulate the success of Chelsea Market (which occupies a former Nabisco factory) to the south.

Like Chelsea Market, Terminal Warehouse is topped by offices (although no Food Network here). Since at least the Tunnel days, the building has devoted thousands of square feet to self-storage. Chelsea Mini Storage still exists in the building, but is being scaled back and its square footage converted into loft-style office space. Uber moved its New York City headquarters to the building from Long Island City in 2015, increasing its office size from 6,000 to 54,000 square feet, the Times reported at the time.

Acclaimed restaurateur Danny Meyer opened bar Porchlight on the building’s northeastern corner in early 2015. La Colombe hawks artisanal coffee on its southeast corner. Both storefronts along Eleventh Avenue funnel into the tunnel, which in years time building manager Waterfront NY imagines as a veritable food hall drawing crowds from the High Line up to Hudson Yards. But now, the stretch between those two and the tunnel’s West Side Highway entrance, where a lonely ‘wichcraft serves up lunch to the area’s commuters, is quiet.

It’s a long-term play, Eisen says, but if all goes according to plan, one that will be a big win.

An observation deck is coming to the Chrysler Building