Over three generations, a family creates a vibrant Upper East Side home

Ariel Colangelo moved into her Lenox Hill studio in August 2010, soon after she had graduated college, and just as she was preparing to attend law school. It made her the third generation of her family to have lived in the apartment, and each generation has left their own indelible mark on the co-op.

Ariel's father first came upon the apartment when he was a medical student at New York University in the 1970s. At the time the studio was still a rental, and suited his needs perfectly. In 1981, the building on East 63rd Street went co-op, and her father had a chance to purchase it—so he did, for a sum of somewhere near $50,000. He continued to live there as he began working at Lenox Hill Hospital, but once he met Ariel's mother—and after a brief stint where both lived in the studio—the couple got married and moved to Westchester.

In subsequent years, Ariel's father sublet the studio; in the late ’80s, he purchased an adjacent one-bedroom and sublet that as well. In 1991, Ariel's grandmother decided she wanted to move Manhattan, so she sold her apartment in the Bronx and made the move to Lenox Hill. At first she lived in the one-bedroom, but then Ariel's father decided to sell (which Ariel still says was a very poor real estate move as the apartment sold at a slight loss), and her grandmother moved to the studio.

Almost two decades later, her grandmother moved to an assisted living facility in Westchester around the time that Ariel was wrapping up her undergraduate studies. But Ariel had a choice to make. She knew she was going to law school right after her undergrad, but she had to pick between Boston and New York. Her family played a major role in her eventual decision—her younger brother, to be precise. The siblings have an eight year age difference, and Ariel decided that she didn't want to be away for such a long part of his formative years.

"That, combined with the fact that I ultimately wanted to come back to New York—it makes sense to go to school where you want to end up," Ariel said. 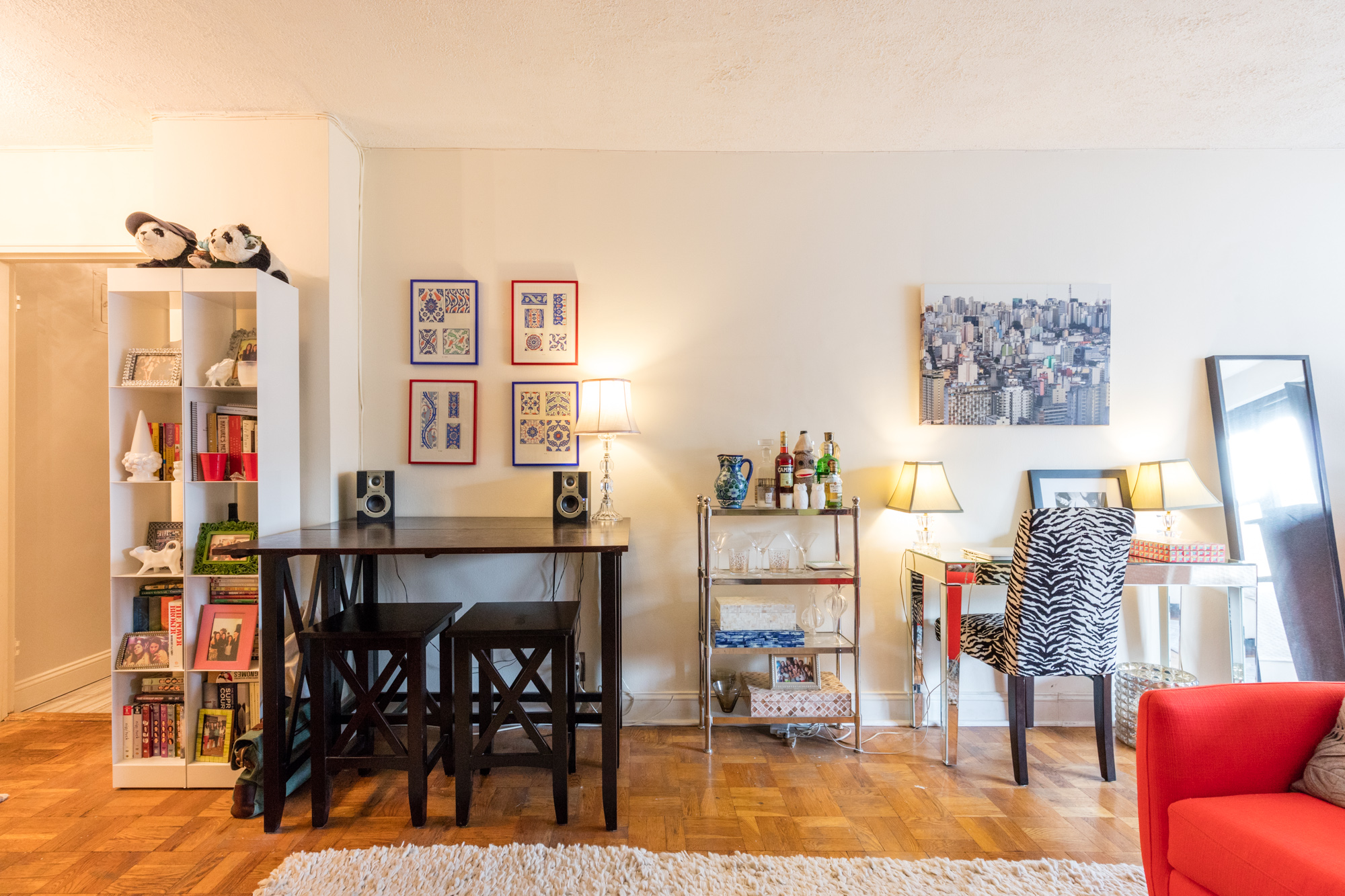 So in August 2010, she decided to call the Upper East Side studio her home. But the apartment wasn't quite her home yet however, and so she set about completely renovating the place.

"Shithole does not even begin to describe it," Ariel said. "It was horrific, and looking back, I don't even know how I lived in it in that state." The apartment hadn't changed much since her father bought the place three decades earlier. Each generation had brought in its own furnishings and objects, but everything else had experienced wear and tear, and was in desperate need of change.

With the help of her parents, Ariel set about completely remodeling the place. Many of the interior walls were torn down (even though the layout was kept essentially the same), and both the molding and floor were redone—and through it all Ariel continued to live in the apartment. The only time she did not was the one week when the the space was repainted just before she officially moved in. It's been a laborious and time-consuming endeavor, but one that Ariel is proud of because it has given her time to imbue the space with her own personality.

The apartment was renovated in parts. First came the main room, and once that was complete, the kitchen followed. That space hadn't been touched since the building was constructed, and it still had tin cabinets, a linoleum countertop, and refrigerator that resembled an icebox, Ariel said.

Renovating the kitchen turned out to be anything but easy. When the walls were opened for plumbing and electrical work, they found asbestos in the wall, and subsequently had to spend weeks and thousands of dollars abating it. Once that was finished, and after new cabinetry and appliances were installed, a pipe in the wall exploded and flooded the neighbor's kitchen. Now, more than a year since that project was completed, Ariel and her family are still in insurance negotiations over the matter. That has stopped work on another part of the apartment: a planned window seat, which is why the wall along the window continues to be bare. Ariel planned to use the security deposit for the construction work to build out the window seat, but with those funds held up, the project is currently on hold.

That hasn't in any way deterred her from making her apartment feel more like a home. Over the years, she has continued to fill up the space with tchotchkes she has collected on her travels, and pieces of furniture that she loved. The dining table was her first new purchase, while one of her oldest pieces in the apartment is her dresser—an Ikea purchase. She found it eight years ago while still in college, and it's survived two moves in the years since. 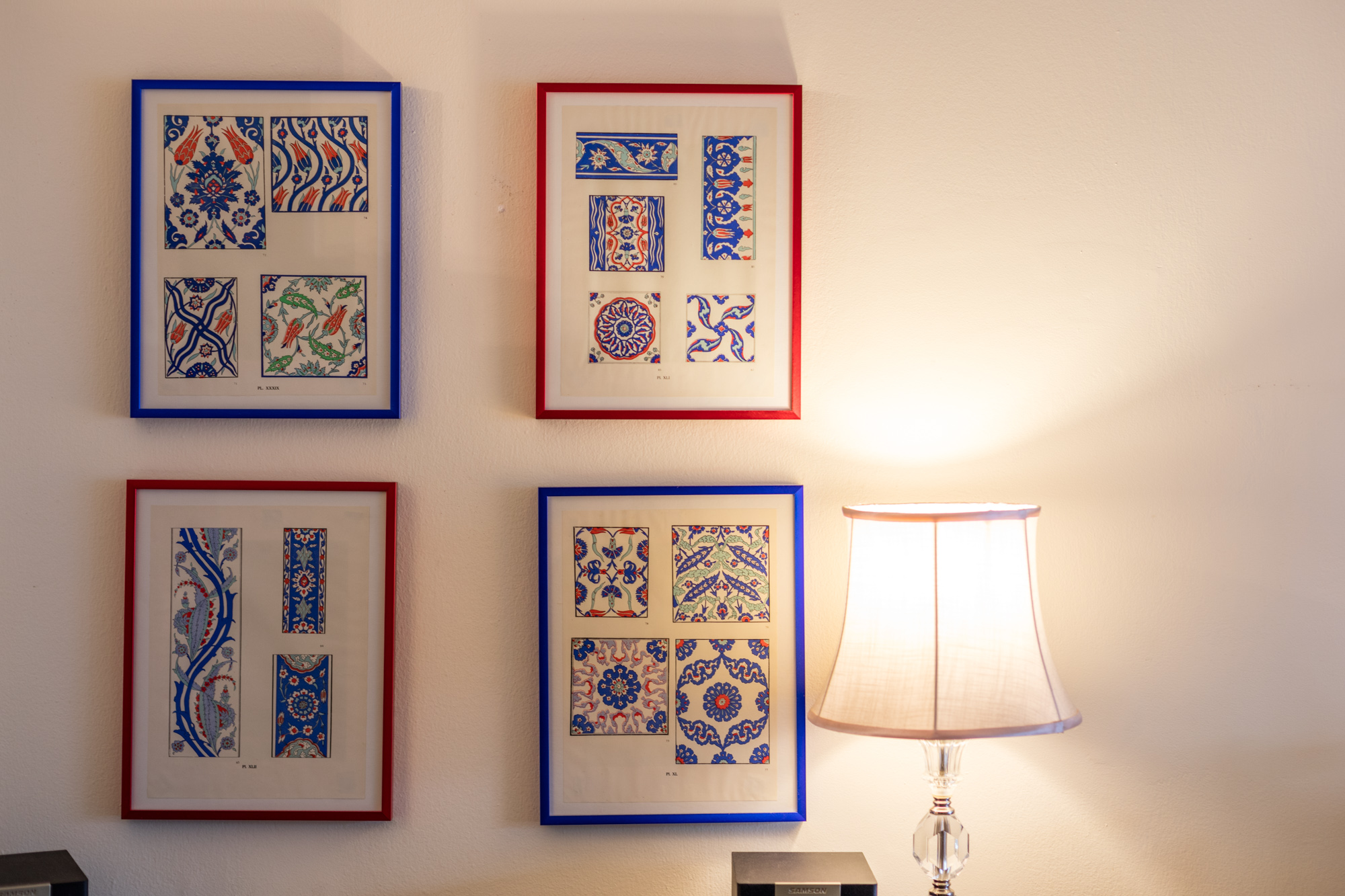 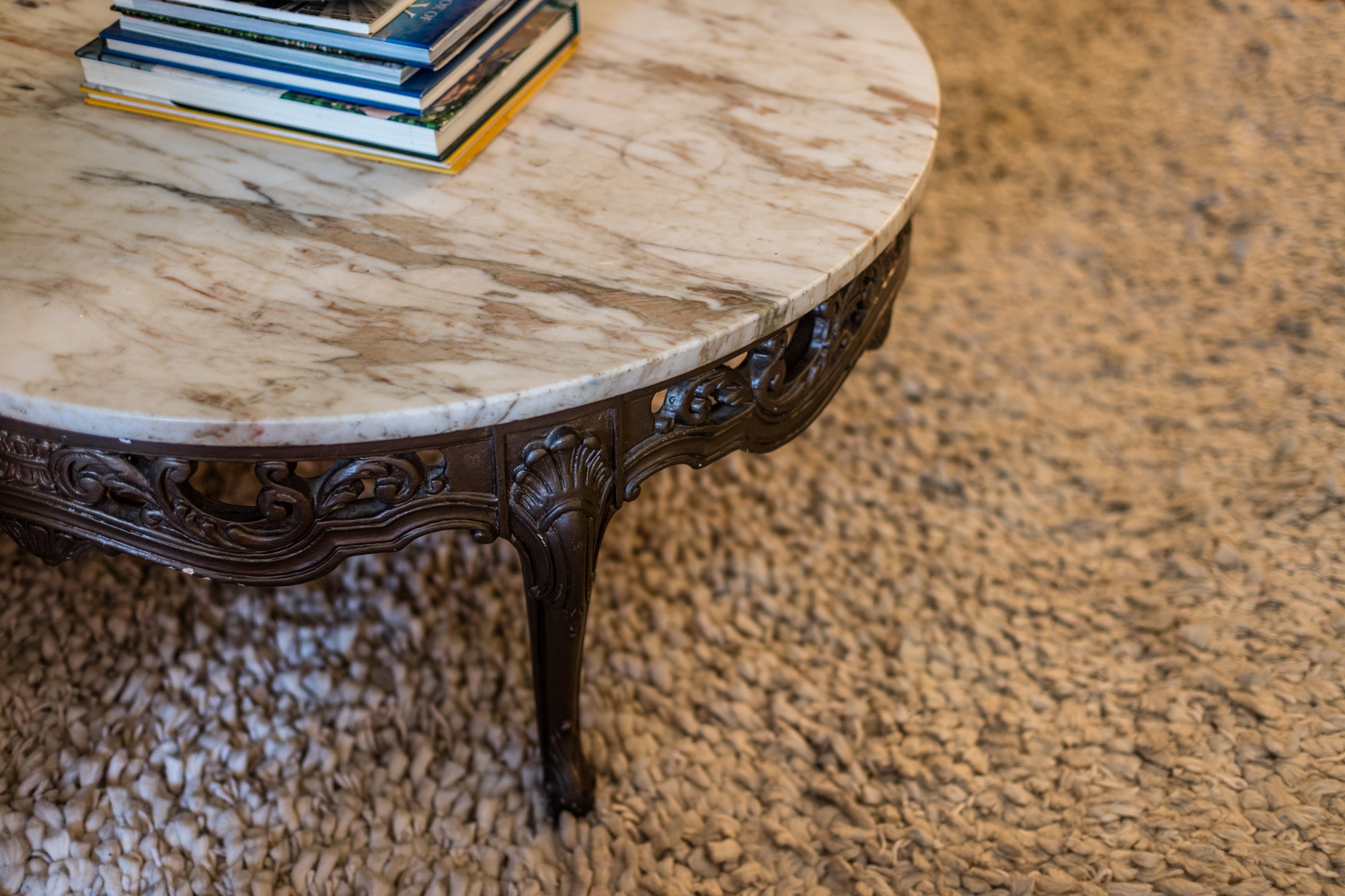 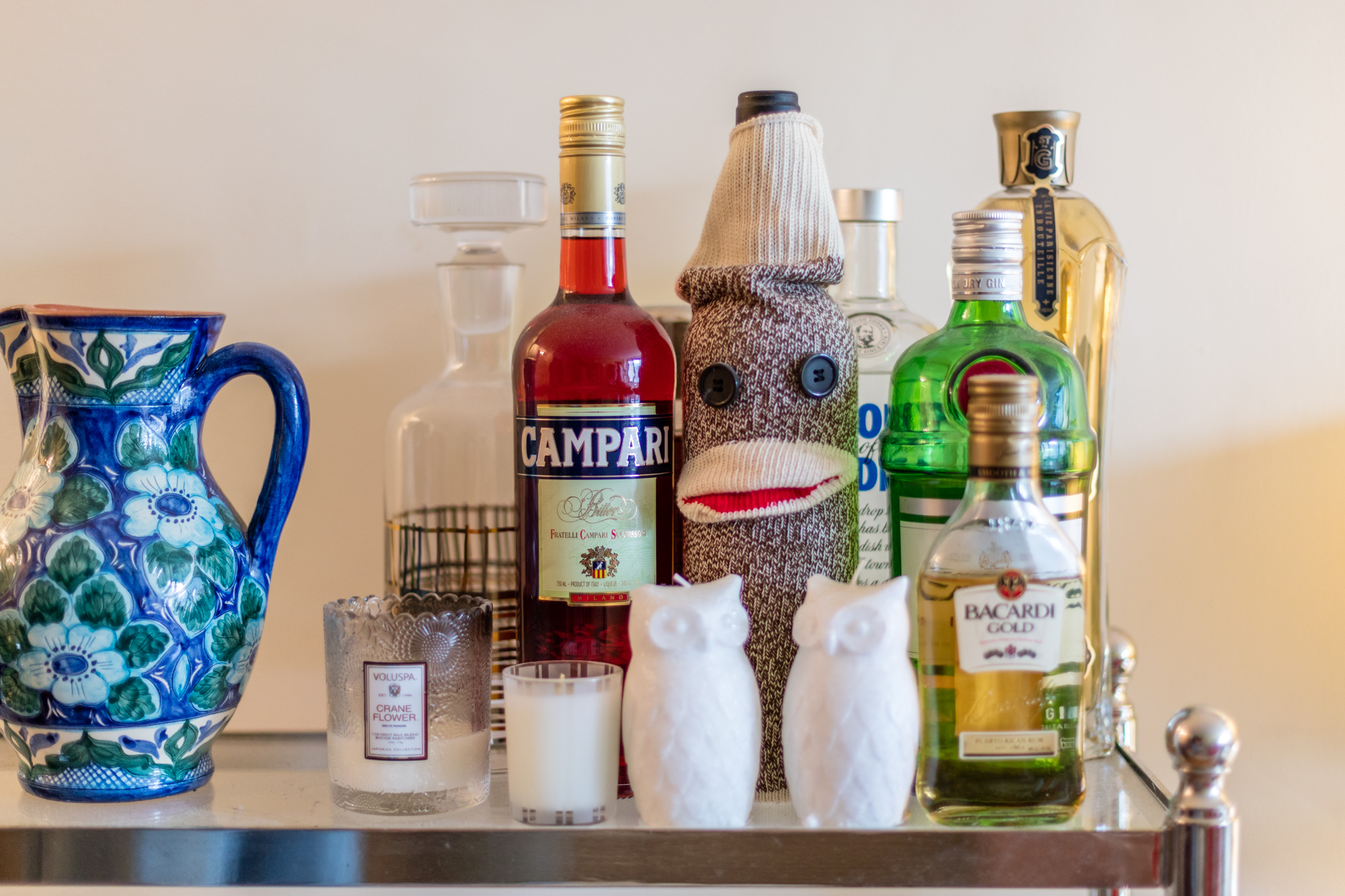 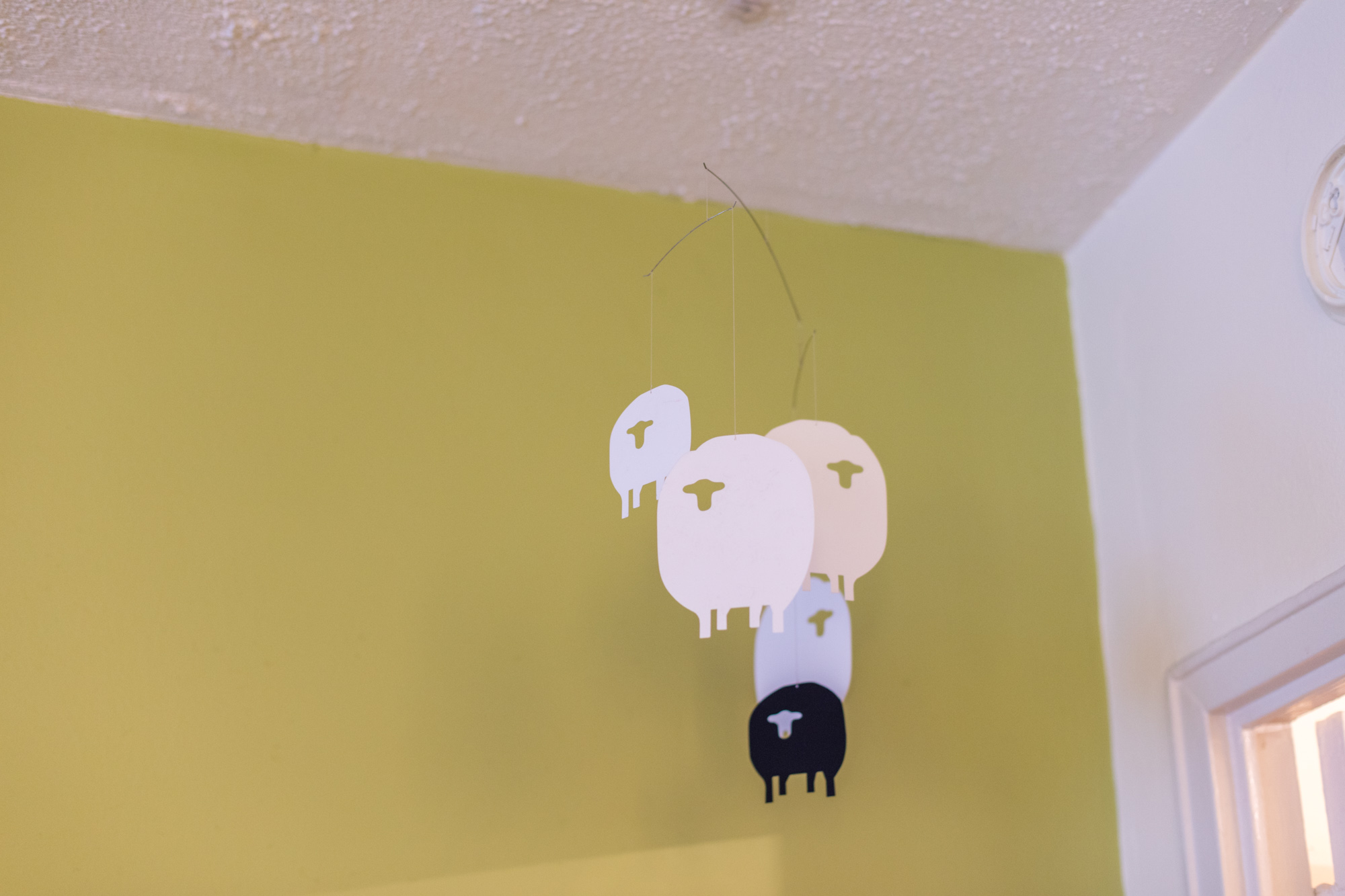 And while she may have made several new additions to the studio, there are still signs of her family members who have lived there in the past. The marble-topped coffee table, for instance, belonged to her grandmother and has been in the family since before she was born, as did a cactus that she proudly reveals she has kept alive since she moved in.

Her parents left behind the nightstand, atop which sits a cork lamp that Ariel purchased from a flea market in Portugal. The walls are decorated with photographs and prints from her travels to Brazil, Peru, and her mom's trip to India. The Torah portion from her Bat Mitzvah sits framed atop the couch in the living room—it was created by an artist in Venice, Italy. Also from that country is a blue vase that Ariel picked up from her grandparents' home town. The entire apartment is full of such objects that each have their own special value.

My favorite part about the apartment is that it feels like a home. It just feels like I actually live here, and it is very personal, and there's a lot of history in it that makes it really special to me. There are so many other places that I would rather live neighborhood wise and streetwise but I would never trade this for anything. I would never want to live anywhere else because of how hard I've worked to make it my own, and it reflects who I am, and what's important to me.

Some of her only complaints are the fact that she doesn't have a dishwasher and washer/dryer in-unit (though the building has a laundry facility). And then there's the fact that she lives away from most of her friends in Brooklyn. She hated it in when she first moved in, and it took her a little bit of time to get over that sense of isolation. But it was her apartment that really got her through in the end.

"Obviously living in New York, everyone moves, and I have never moved," Ariel said. "It's been very much been a safe haven, and a stable force in a crazy place. I've switched jobs, and had a lot of tumult in the past six years, and it's what has kept me together, and so I very much treasure that about it."