The Empire State Building celebrated its 85th birthday this year. The Art Deco skyscraper is an icon of the New York City skyline and, although it predates this term, the city’s first supertall tower. It’s home to one of the most popular observation decks in the world. If you were to lay it on its side, the building and its spire would stretch farther than the width of the Pentagon. With its decades of superlatives, it’s easy to lose sight of the Empire State Building in its most basic form: it’s an office building. And despite its age in this tech-forward era, despite its competition at Hudson Yards or at the World Trade Center, the Empire State Building’s still got it.

Case in point: global licensing company Shutterstock, with its 1.4 million customers in 150 countries, moved its world headquarters to the Empire State Building in 2014. It wasn’t just the building’s cachet that brought the company there, says Shutterstock’s Head of Global Facilities and Operations Razia Ferdousi-Meyer. A whole host of factors were at play, not the least of which is the building’s central location for commuting employees. It didn’t hurt either that Shutterstock CEO Jon Oringer is friendly with the building bigwigs, who granted the company express permission to build their space out in a way that complimented a collaborative workplace for a company born of this century.

Of course Shutterstock also did its part in making sure the Empire State Building worked for them. They brought in architecture firm Studios to remake their 79,000 square feet on floors 20 and 21 in a way that’s meaningful beyond its appearance. Before the renovation, Shutterstock analyzed 50,000 hours of meeting time culled from over seven months to determine the amount, and composition, of conference rooms needed to accommodate their growing team. Anyone who works in a collaborative corporate culture knows that coming by adequate meeting space is a struggle. In their New York City office, Shutterstock has it on lock. 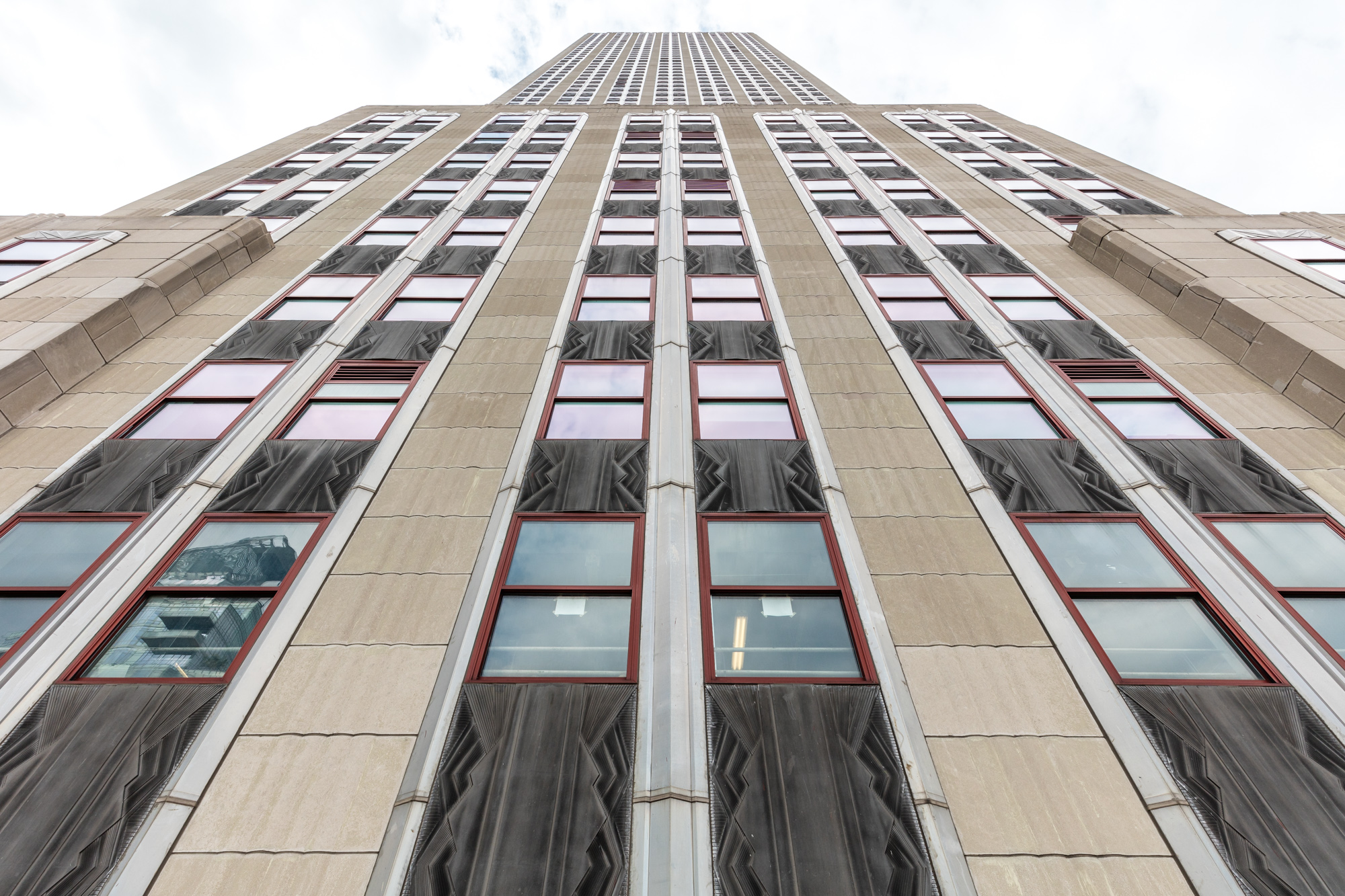 In the Empire State Building, Shutterstock created its own superlatives: it’s the only company to have an internal staircase connecting two floors, and it’s the only company to have access to the terraces off of its office. The staircase speaks for itself, but the two terraces provide a rare amenity for its many employees: outdoor space with Wi-Fi. Although no one was out there enjoying the terraces midday on a recent visit, Ferdousi-Meyer made a point of saying they don’t go unused. The office sometimes holds company-wide happy hours out there, and on other occasions they’re sometimes used as a staging ground for the office’s meditation classes.

That is, when the meditation classes depart from the bona fide yoga studio they’re most often held in. Despite being in the Empire State Building in New York City, the office’s amenities seem more common to those of the tech start-ups of Silicon Valley. For starters, Shutterstock brings a personal chef in every day to prepare lunch for employees—menus, of course, make exceptions for those who are gluten free, vegan, or have food allergies—which is served free of charge in the office’s cafeteria area. Snacks like fresh-cut fruit and yogurt are always on hand, as is coffee. 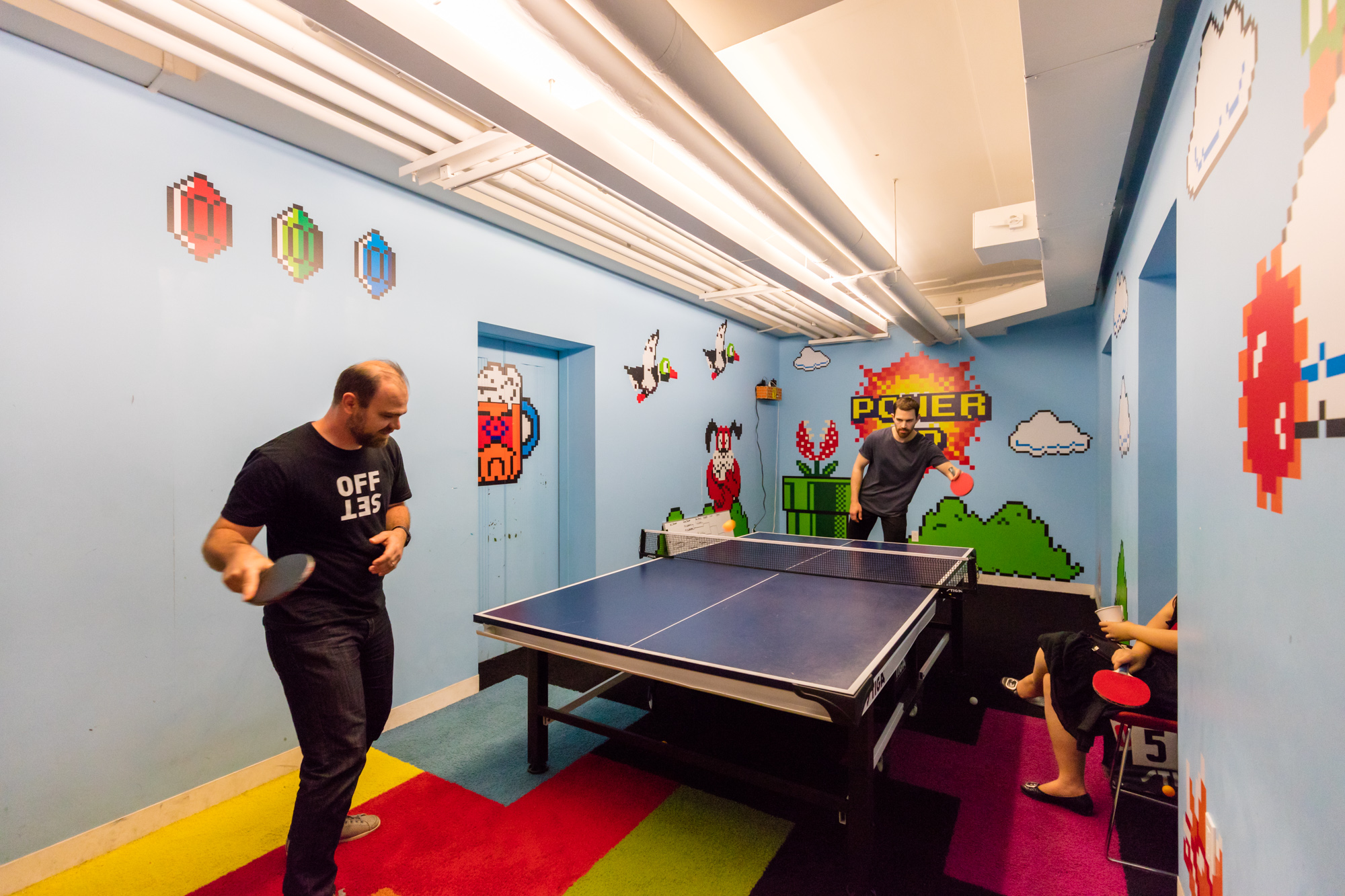 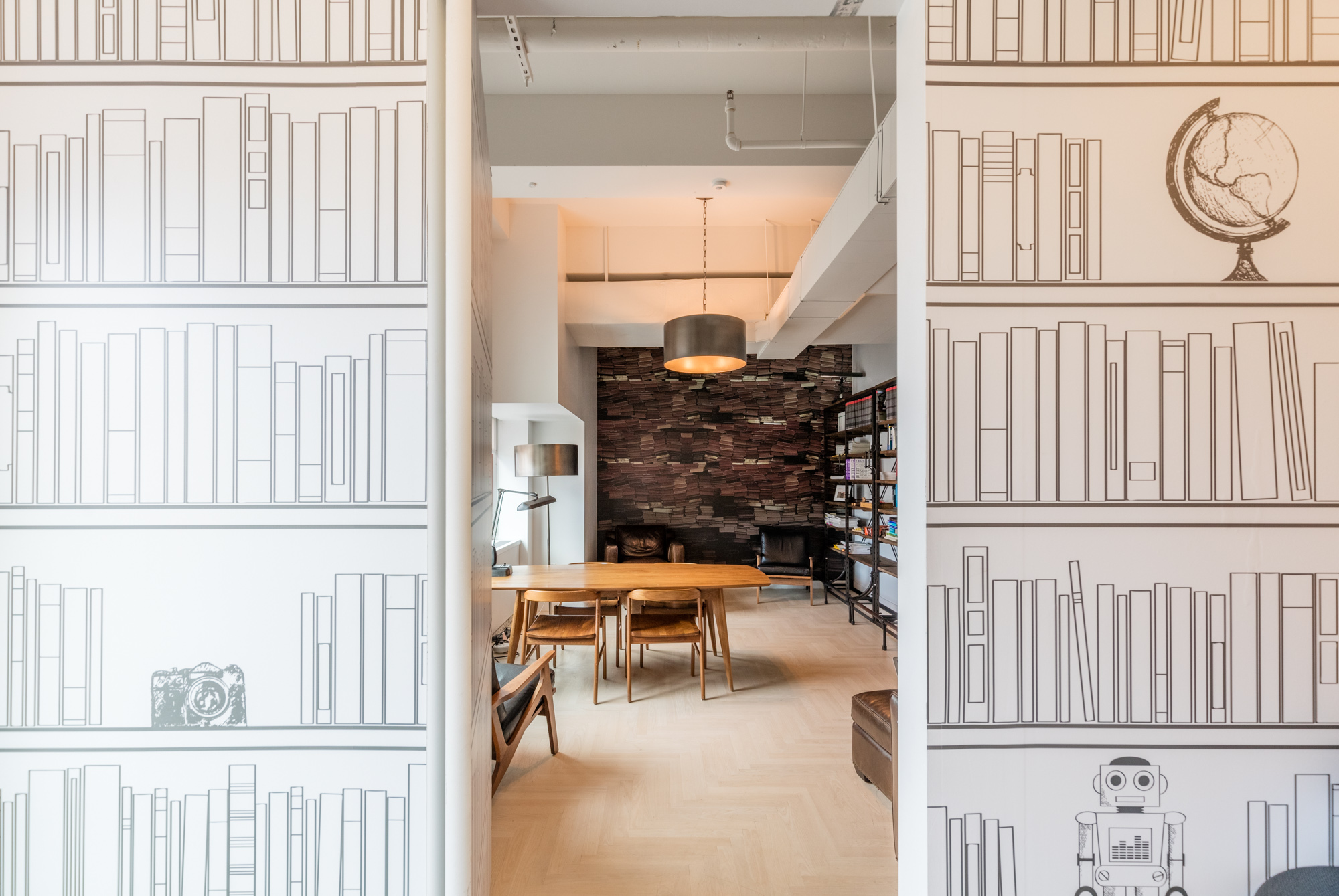 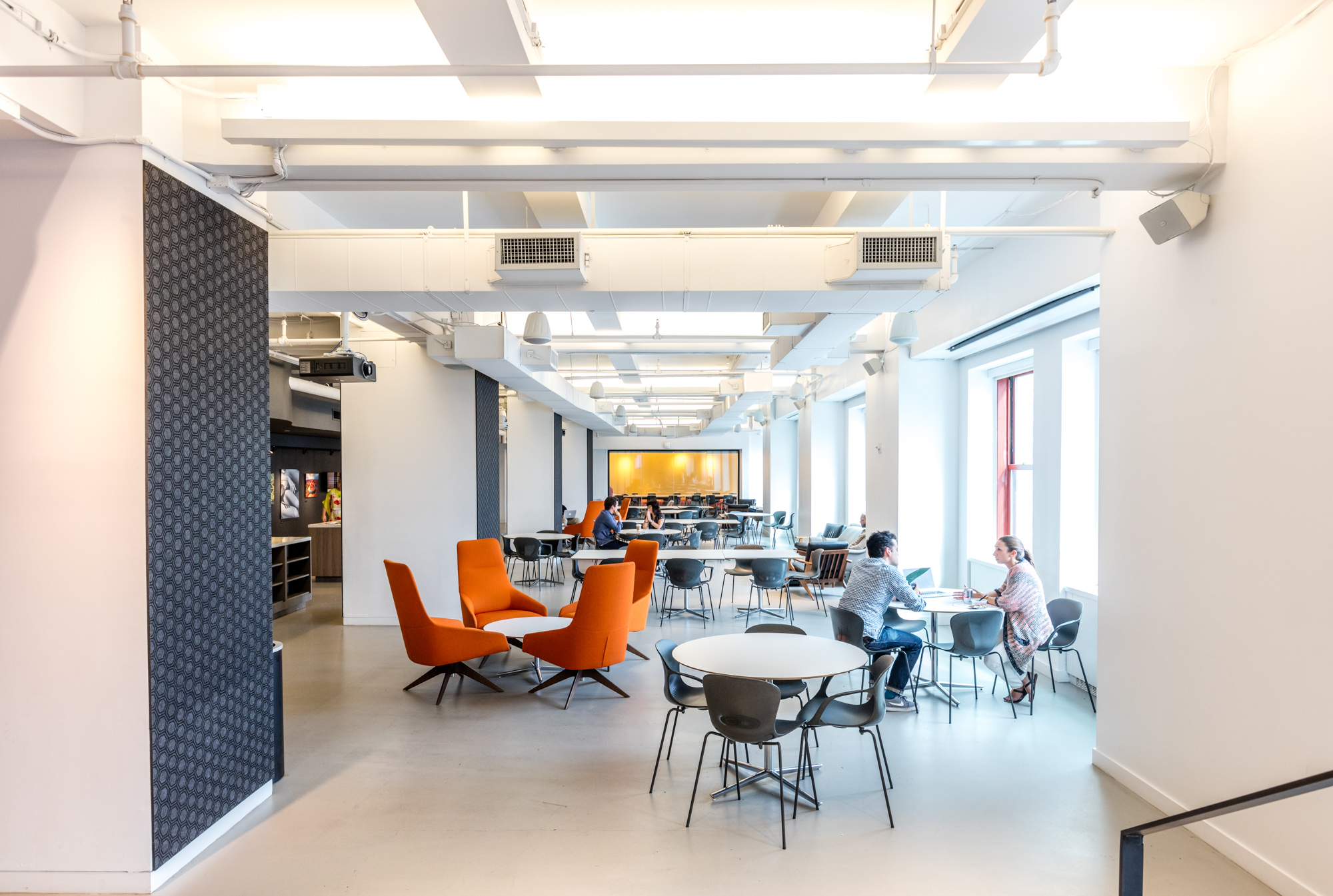 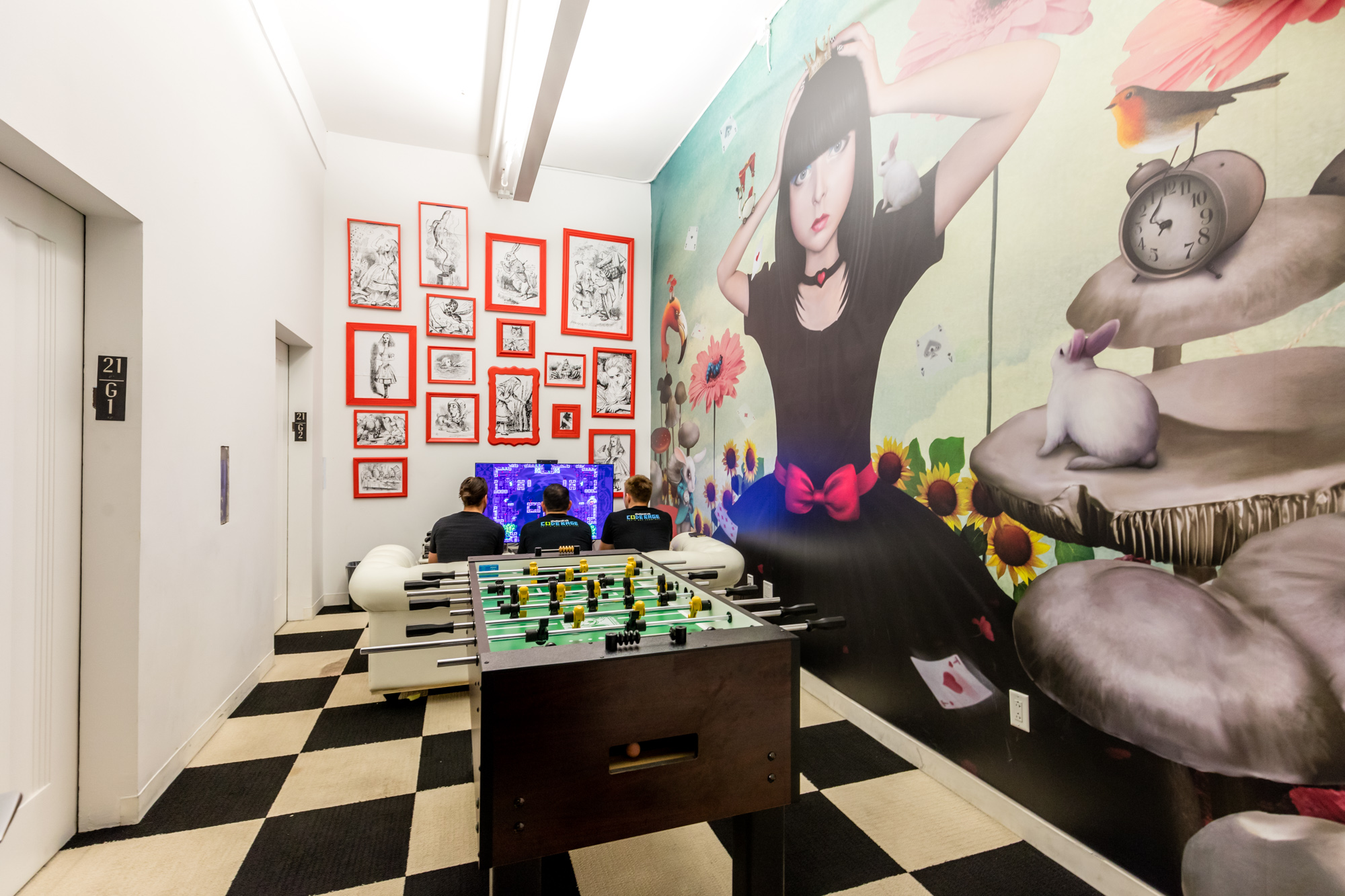 Employees at Shutterstock work nine- to ten-hour days on average, so the office brings wellness activities in that its employees might have a hard time fitting into their schedules. Yoga and meditation classes are taught regularly in the evenings, complimentary masseuses are bookable in 15-minute increments every Friday. An 8-bit-themed game room holds a ping pong table, and down the hall in a different themed room, game consuls are available for the playing.

It takes a discerning eye to see through the office’s updated design, game rooms and all, to the Art Deco character of the Empire State Building’s interiors. For all that Shutterstock was allowed to change, there were things they could not. Original Art Deco grills that cover the radiators had to stay. Instead of obscuring that design, it was imitated in the decorative screen that lines the office’s central staircase. Original panels announce the floors at the elevators. A mail chute installed in the 1930s still runs letters to the ground floor.

For this company, the age of its NYC home base does not equate to old. With a little innovation and some good design, the space has been elevated to match Shutterstock’s entrepreneurial spirit. "Honestly," Ferdousi-Meyer says, "I wake up every day and can’t believe I work in the Empire State Building."