Why the tiny-house movement isn’t for me: One New Yorker’s story

What happens when an anxious New Yorker tries to unplug in a tiny, remote cabin upstate?

In New York City, there aren’t many stand-alone tiny homes to be found, but there is Getaway, a start-up known for "custom-building Instagram-able tiny houses."

Getaway launched in 2015 with three cabins available to rent just outside of Boston, and after the success of those, they debuted four New York cabins earlier this summer. Each one measures somewhere between 160 and 220 square feet, giving those who are curious about micro-living a chance to test drive the lifestyle.

The company bills itself as the "anti-vacation," designed to give anxious city-dwellers (i.e., yours truly) a chance to unplug from the stressors of everyday life. The cabins are close enough to the city to make them an easy weekend trip, and inexpensive enough to make a quick jaunt economically feasible. The goal, according to Getaway’s press materials, is "to get Americans to use those 50% of vacation days they don’t use each year," and "do nothing at all."

That the cabins are tiny is an essential part of the business model. In theory, the tininess of the cabins will lead to the serenity that Getaway wants its users to cultivate, because the distractions of modern life—television, Wi-Fi, and the like—are not part of the design. There are some books, some board games, and a lock box where you’re told to hide your phone "for a true escape into nature"—and that’s it.

That’s all well and good in theory, but how about in practice? I decided to test-drive one of the Getaway’s micro-cabins, both to see what tiny-house living is really like and to see if I could survive a self-imposed digital detox. (Spoiler: not really, but more on that later.)

Along with my husband, I rented a car and made the two-hour drive to Catskill, New York, where Getaway’s four cabins are located. It’s an extremely pleasant drive—there are mountains and nature and wild animals running through fields!—but as someone whose main exposure to the outdoors involves wandering through the not-at-all-rural park near my Brooklyn apartment, the location was a little unnerving. The cabins are grouped together on a small patch of land that’s accessed by turning off a main thoroughfare, and then driving on twisting back roads through a sparsely populated wooded area.

The tininess of the cabins should lead to serenity, because the distractions of modern life are not part of the design.

Under normal circumstances, this would’ve been a little weird; but my husband and I arrived as it was getting dark, which gave the whole thing a spooky, slightly Blair Witch-y sort of vibe. The fact that cell service is kind of spotty didn’t help.

When we arrived at the campground, we then had to navigate to the specific plot of land on which each individual cabin is situated. Ours was about a five-minute drive from the main road, in the middle of a clearing surrounded by trees. The signage that provides directions to the cabins is probably pretty useful during the day; at night, not so much. (Did I mention that I’m afraid of the dark?) We overshot the turn for Maisie by about a quarter mile, and had to double-back before finally finding the cabin.

Which leads me to taking a train there: Without revealing too much about the location (which Getaway tries to avoid, so I’ll do the same here), the cabins are a 40-minute drive from the closest train station. Trying to navigate a cab or Uber driver through the backwoods of Catskill doesn’t seem like it’d be the most fun task, so best to just avoid the hassle entirely and drive yourself. (Besides, being able to actually get outside of the radius occupied by your cabins is probably a good thing.) 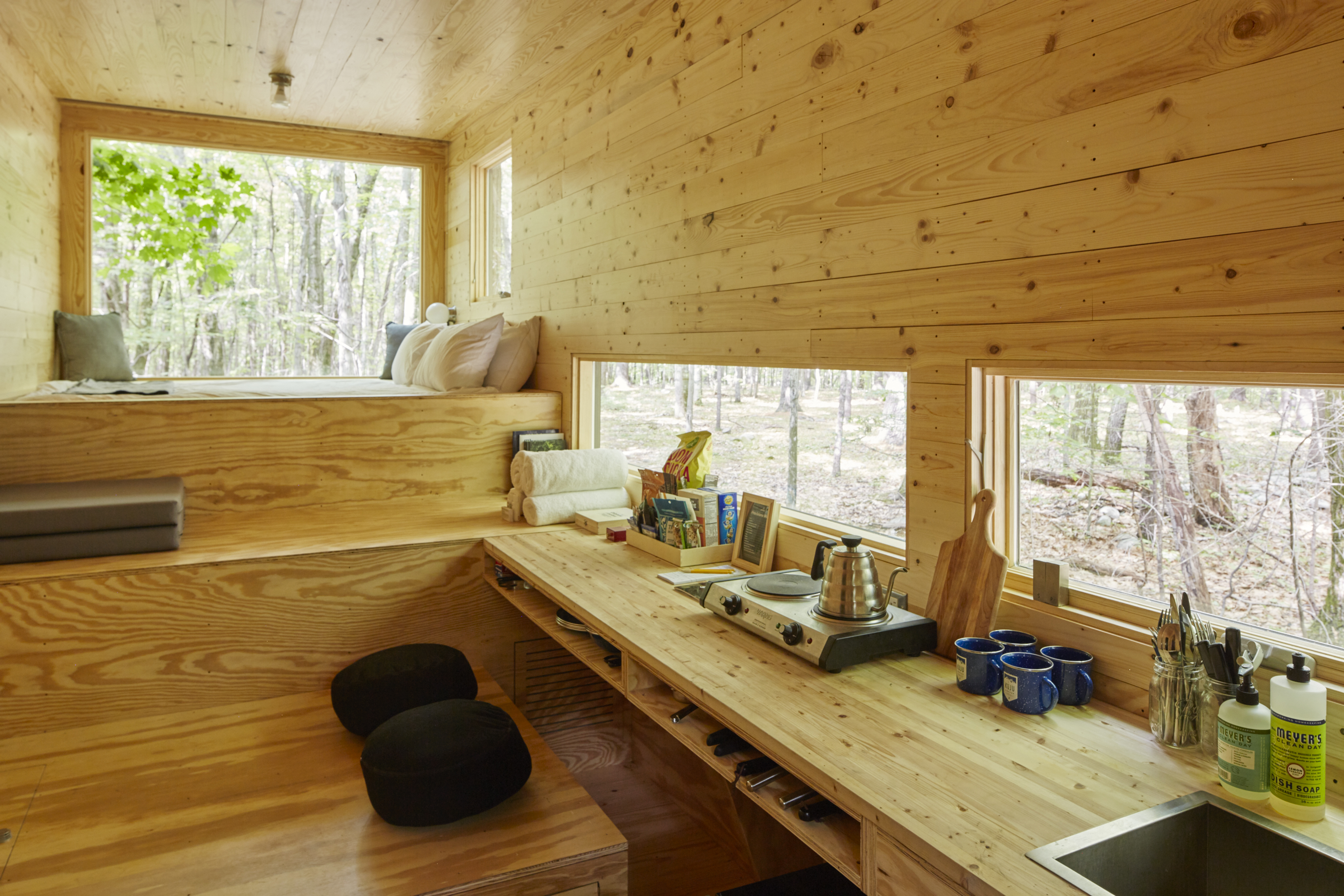 And yes, these are tiny homes—in size, of course, but also in ambiance. Like many of the dwellings found on blogs devoted to the micro lifestyle or Tiny House Nation, the cabins are small and simply decorated, but designed in such a way that what little space is available is used smartly. Maisie, the cabin we stayed in, is intended to sleep three people at the most, with a queen bed and a platform below it that can serve as seating (it had the most comfortable beanbag chair I’ve ever used in my life) or extra sleeping space. There was some storage space in the kitchen, but only a hot plate for cooking, unless you count the mini Weber grill outdoors.

Then there was the bathroom. One of the oft-cited reasons that people make the shift to tiny house living is because it’s more environmentally friendly than living in a traditional home; smaller houses use less electricity, require less energy for heating and cooling, and often inspire owners to come up with creative solutions for waste disposal.

In the case of Maisie, that meant an electric composting toilet. It was weird to use. It looks like a normal toilet, but it definitely doesn’t flush like a normal toilet—plus, it only comes with 15 flushes before it needs to be refilled. (Luckily, someone from Getaway is on call in case you need more flushes, and the number to call is posted right above the toilet.) I’m not sure how the technology works, and frankly I’m a little grossed out by it; but I can report that it gets the, um, job done. 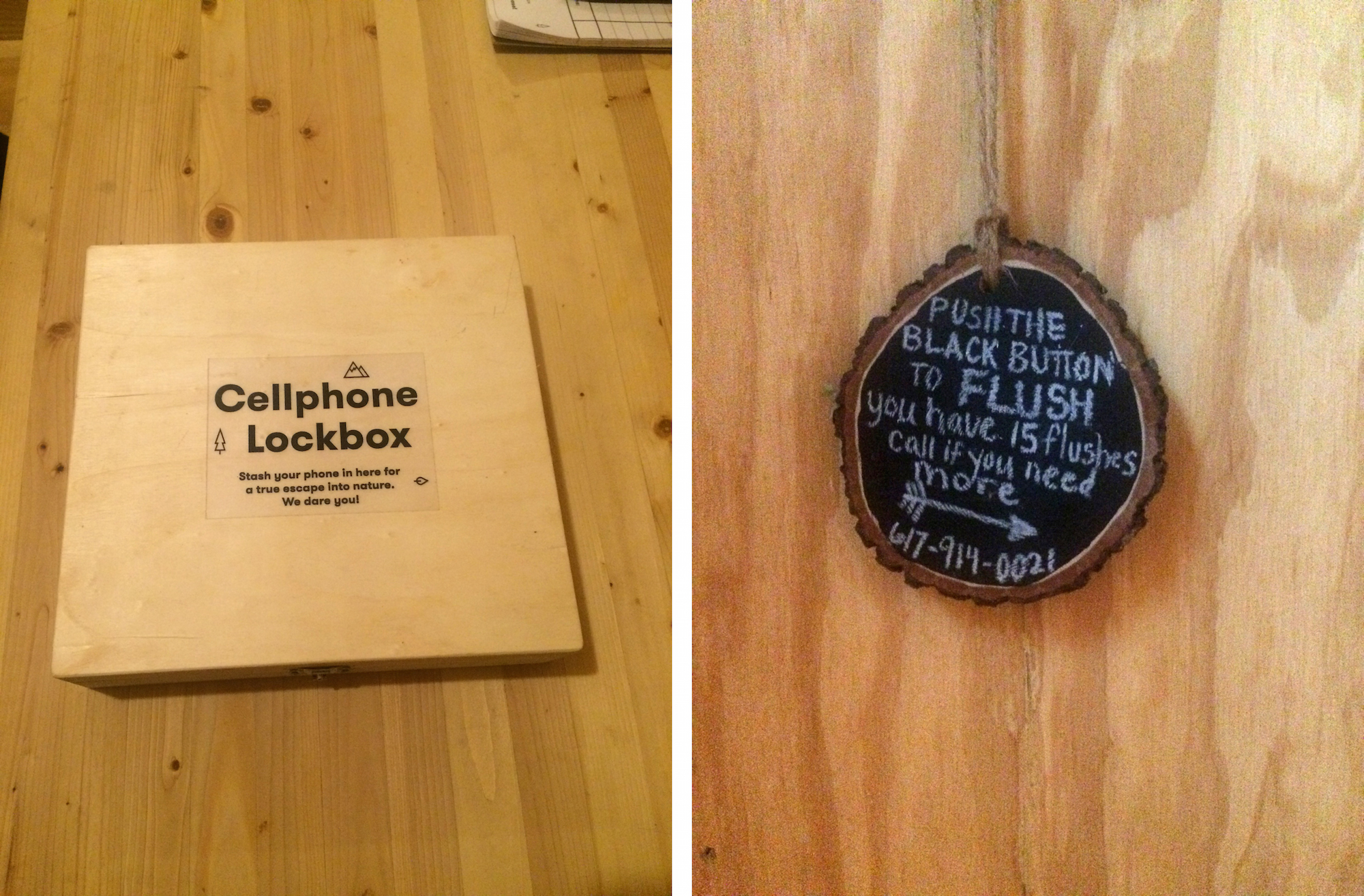 The cell phone lockbox and the composting toilet are just two of Maisie's features. Photo by Amy Plitt.

It only took us a little bit of time to get settled, and once we were comfortable—with me reading on the bed and my husband lounging in the (extremely comfy—I seriously wish I had taken it) bean bag chair on the platform below—it struck me that what we were doing wasn’t all that different from our normal lives. My Brooklyn apartment measures about 500 square feet compared to Maisie’s 200, and it’s not nearly as well-designed.

My husband and I are already homebodies, and we spend a lot of time quietly reading on the couch as it is. I don’t know that I needed to go to a tiny cabin in the woods to do the same thing. And I patently failed at the digital detox aspect of the stay, clinging to the slightly weak phone signal for all it was worth. (What did I use it for? Texting pictures of the cabin to my friends and looking at Twitter. Maybe I should have tried harder.)

All it was missing was a copy of Walden to complete the urban hipster tableaux.

And the welcome packet that’s in the cabin upon arrival includes a number of activities that hark back to that whole get-off-the-grid thing (learn to meditate, go bird-watching, write a villanelle—you get the idea). The tweeness of it all was a bit much, and I say this as someone who listens to those bands, and likes to think she will one day learn to meditate, and generally has a high tolerance for twee.

Another con: the bugs. So many bugs. Big black ants that you don’t really see in New York City apartments. I woke up and found an ant crawling around in the bed next to me. I guess I should just be grateful that it wasn’t anything worse, like a centipede or (shudder) a cockroach.

That doesn’t mean I didn’t enjoy myself, though. On the contrary, once I was able to get past the fact that this cabin had been basically tailored to my interests (or have my interests been shaped by this aesthetic permeating the culture? It’s hard to say), I had a really good time. Waking up in the middle of nature, with a view of nothing but trees and the sun, did soothe my addled, city-dweller brain, even if it was only for a little bit. If we’d been able to spend more time (we only stayed one night), I think I may have actually left feeling refreshed, a sensation that doesn’t happen too often. 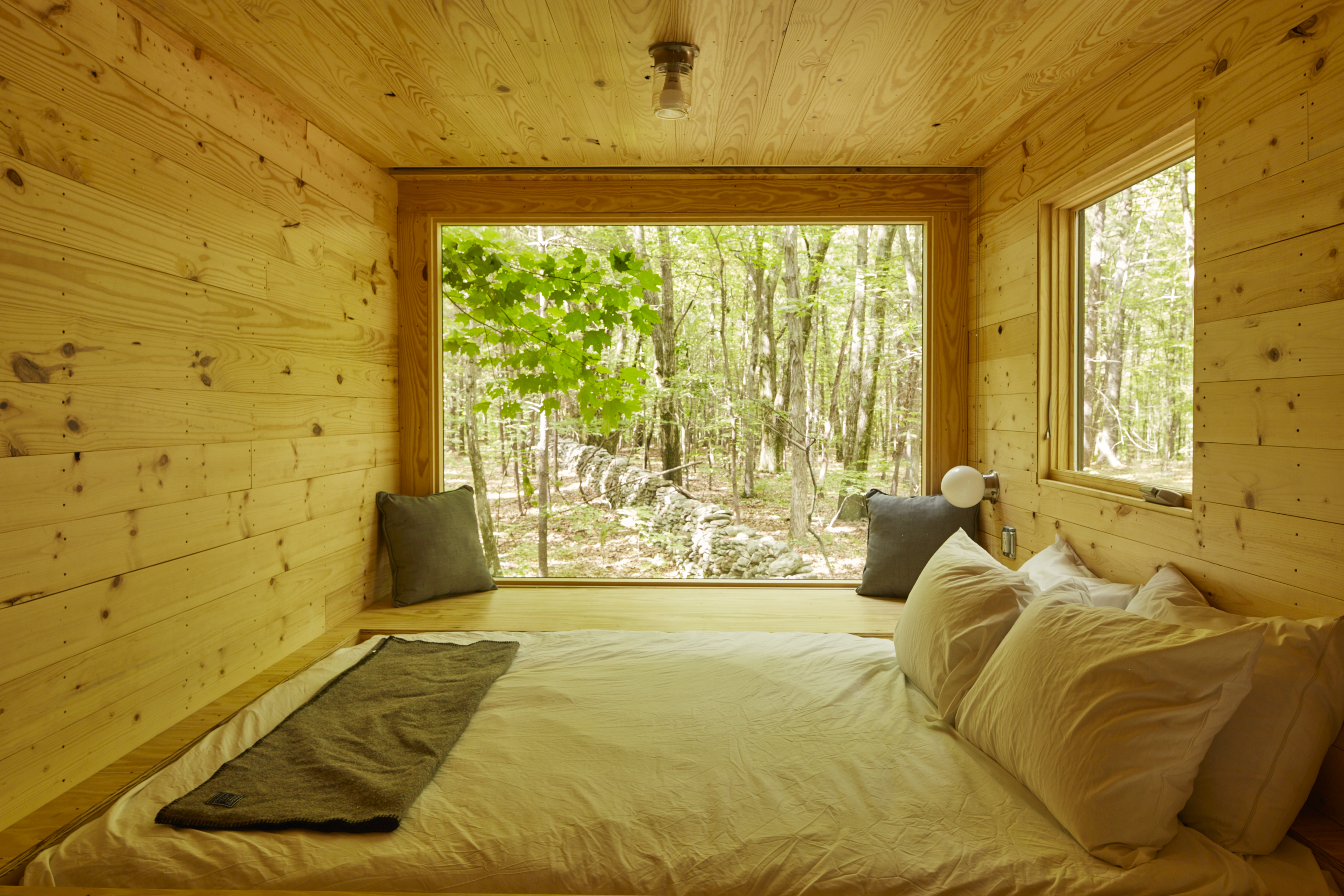 The novelty of tiny house living is lost on me simply by virtue of being a New Yorker.

But the more I’ve thought about my stay since I got back, the more I’ve realized that the novelty of tiny house living is lost on me, simply by virtue of being a New Yorker. Every day, as the editor of Curbed NY, I see minuscule apartments on the market, and hear stories from people who live in extremely small spaces. New Yorkers have been living in small spaces since the city’s earliest days, and often in apartments that are far more poorly designed than the typical tiny house. Heck, I’ve lived in apartments that have been less comfortable than Maisie.

I’m not immune to the appeal of living a simpler, more pared-down life; I, too, bought The Life-Changing Magic of Tidying Up in the hopes that it would deliver on its titular promise. (It did not.) But I’m not sure the sacrificing living space has to be the answer. I’ve lived in a 300-square-foot studio before; it’s not an experience I’d like to replicate for the long-term anytime soon. Tiny house living is fun to test drive, but as a lifestyle? It’s not for me.

Watch: Decor tips for living in a tiny cottage

The Curbed guide to the Hudson Valley and the Catskills