Is there a future for micro housing in New York City?

The short answer: it's complicated

At the turn of the 20th century, New York City passed one of its most influential housing laws: the 1901 Tenement House Act, which remains the basis of New York’s low-rise housing regulations. The law sought to address overcrowded living conditions caused by the unprecedented population boom of the 1800s.

In a Lower East Side tenement, it wasn’t uncommon for four people (or more) to share a 284-square-foot apartment. After the Tenement House Act, each apartment was required to have at least one room measuring 120 square feet, with other rooms providing at least 70 square feet of space.

Now, granted, there are still very small apartments in the five boroughs—holdovers from before that housing law that have since been carved into modern apartments. But by and large, a belief that spacious apartments translate to a better quality of life has prevailed in New York. But the city's latest population boom, more than 100 years after that first piece of legislation passed, may turn that belief on its head.

This year, New York's population topped 8.5 million for the first time. And according to the Citizens Housing and Planning Council, nearly 50 percent of New Yorkers are now estimated to be single—but studios, the ideal form of housing for single residents, only make up seven percent of New York’s housing stock. Housing advocates and developers haven’t just started exploring the possibilities of living small; they’ve realized New York is facing "a big mismatch between the housing stock and the population," as Graham Hill, founder of the small-living site Life Edited, puts it.

The interest in smaller spaces isn’t just practical; it’s also driven by the desire to meet the changing attitudes of apartment dwellers. A 2013 study by Urban Land Institute found that "delayed household formation; an increase in single-person households; a decrease in car ownership; and the tendency to accumulate fewer belongings and participate in the ‘sharing economy’" have all contributed to the rising interest in smaller living spaces.

"There’s a desire to have less overwhelming lives, less space, less stuff," Hill says. "The interest is definitely there." But as for developers—not just in New York, but around the country—meeting that demand, "they’re working on it," according to Hill.

And the lack of more modern micro housing isn’t necessarily the fault of developers. In 1987 the Department of City Planning passed the Quality Housing program, under which New York’s zoning ordinance was altered to encourage lower, bulkier, and more economical apartment buildings that were also safe, livable, and attractive. One way to ensure livability was to restrict the development of new apartments under 400 square feet.

That rule stood unquestioned until 2013, when Mayor Bloomberg announced the winner of "My Micro NY," a city-sponsored competition that challenged developers to design innovative micro apartments not limited to the 400-square-foot regulation. At the time, Bloomberg noted that "the growth rate for one- and two-person households greatly exceeds that of households with three or more people, and addressing that housing challenge requires us to think creatively and beyond our current regulations." 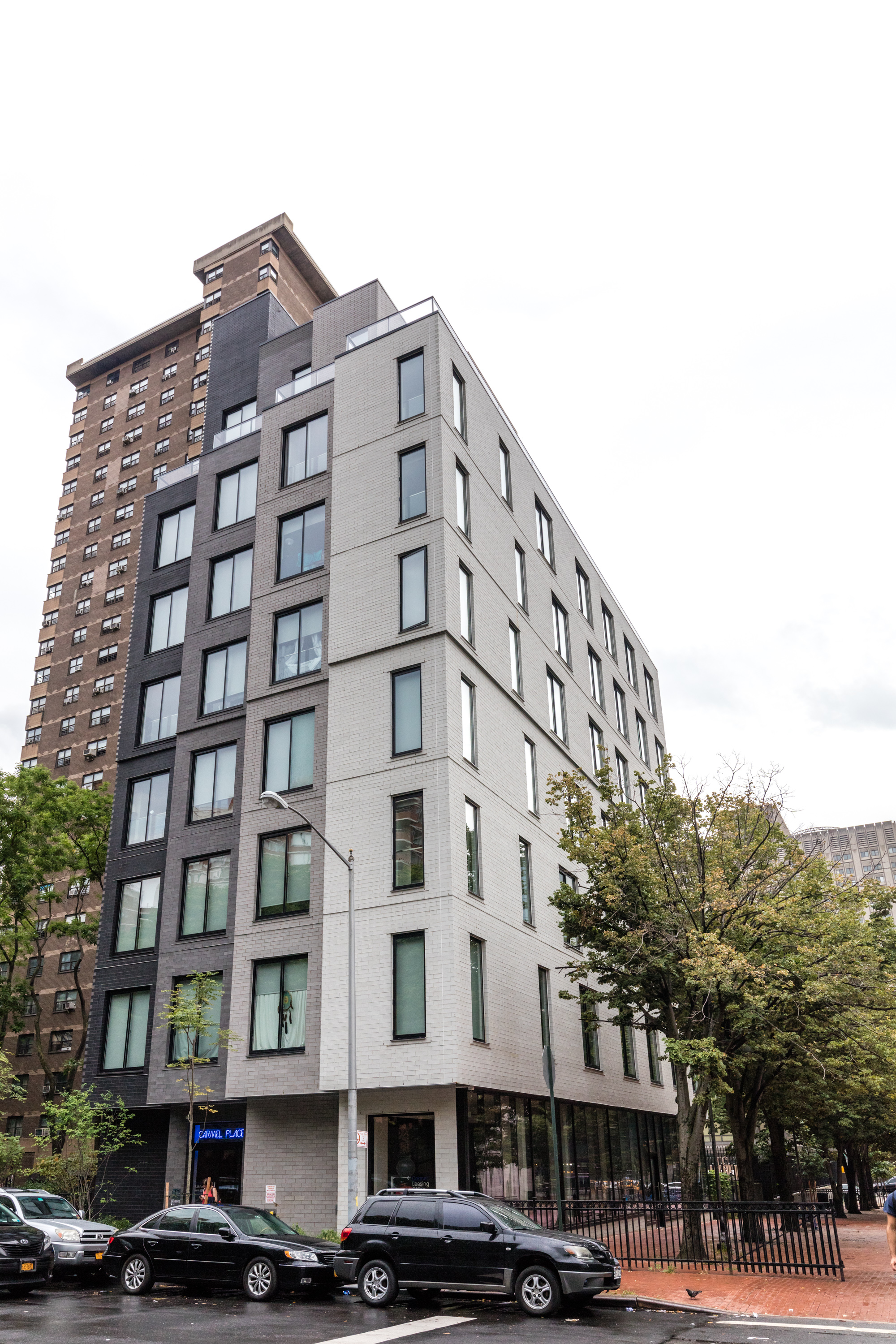 The exterior of Carmel Place. Photo by Max Touhey for Curbed.

Carmel Place marked a big step forward for New York and micro housing, but required plenty of assistance from the city to come to fruition. My Micro NY was sponsored by the city because the developer needed to work closely with building and planning officials in a complicated process to build units under the legal 400 square feet. Those legal restrictions have kept any other developer from building anything similar. "The issue was that nobody was going to design a micro unit building without it being legal," says Frank Dubinsky, vice president of Monadnock.

The city, however, responded to such legal hurdles this March, when the City Council approved the Zoning for Quality and Affordability proposal laid out by Mayor de Blasio. According to a spokesperson with the Department of City Planning, these recent zoning changes remove the 400-square-foot apartment minimum in many cases of new development, but buildings will still be subject to what’s known as the "zoning density factor." Currently, there is a cap on the number of apartments that can be constructed within a new building depending on the zoning of the neighborhood. This rule limits the density of a new building, meaning a developer isn’t allowed to fill their development entirely with studios.

Zoning for Quality and Affordability gives developers a little more flexibility in deciding the makeup of apartments, but not a ton. While it’s now legal to include new apartments under 400 square feet, those existing density factors still keep a developer from packing a new development solely of micro apartments. (Meaning that a developer can not legally build another Carmel Place.) Maria Masi, co-chair of the Urban Land Institute New York's Housing Council and Vice President at Brookfield Properties, calls the changes "a step in the right direction toward opportunities for developers to create micro units." But building another development like Carmel Place "would likely require even greater density allowances," she says. "So that is something to consider for future amendments as the market for micro units evolves."

The big question remains: how will it evolve? A developer has yet to announce a project that takes advantage of the zoning changes and includes micro apartments under 400 square feet. But it’s only a matter of time. "I’ve given tours to almost every developer in New York of [Carmel Place]," says Dubinsky. "There’s a lot of people thinking about it." Dubinsky believes new buildings that include micro units will be announced "within the next six to eight months."

Other real estate insiders hint at exciting progress. Brothers Andrew and Chris Bledsoe founded Ollie to curate interior design and amenities for micro studios (less than 400 square feet) and efficiently-designed shared suites (750 square feet for a three-bedroom apartment). The company, which handles the amenities and furnishings at Carmel Place, expects to debut its services at three developments in the heavy-hitting neighborhoods of Downtown Brooklyn, Hudson Yards, and Long Island City. (Bledsoe declined to comment on project specifics, although he did say he expects the LIC project to be "the largest co-living community in New York when it opens in 2018.") Since Carmel Place opened, the number of projects Ollie has taken on around the country doubled from 20 to over 40, he says.

Then there are the developers who have already started experimenting with small apartments just over 400 square feet. Earlier this year WeLive began leasing "co-living" apartments in the Financial District that average 450 square feet—Ollie’s Long Island City project is likely to debut with a similar concept. At 37-10 Crescent Street, in Queens, Ranger Properties teamed up with architect Fogarty Finger for a rental development that utilizes the shared suite concept.

When it opens next year, 37-10 Crescent will hold 490-square-foot apartments with two bedrooms, a bathroom, foyer, kitchenette and small dining area. Three-bedroom units will span 735 square feet. John Zimmer, associate director with Fogarty Finger, explains the team was inspired by young people already living with roommates in apartments originally designed for families. "Our goal was to rationalize and normalize what people are already doing," he says. By optimizing the design, the team hopes, they can attract young renters who want to live in a new building and are willing to sacrifice space to avoid exorbitant rents.

None of the Crescent Street apartments will have a formal living room; as a compromise, the architects designed areas to socialize, including a lounge, game room, fitness center and roof deck. But it points to a major risk of investing in small apartment design, above or below 400 square feet. "It’s very hard to be a developer and provide an apartment without a living room," says Zimmer. "There’s risk there."

There’s actually a lot of risk associated with micro development, which has yet to play out in the market. "The stock of micro units is still very limited and it is difficult to know if the performance of these smaller units is caused by their relative scarcity or whether significant pent-up demand for micro units actually exists," Massi says. Building micro units, she notes, requires a high level of design "with great attention to elements like storage, light and air, ceiling heights."

At Carmel Place, 17 units came furnished with space-saving furniture, including a couch that turns into s stylish Murphy bed, and a desk that expands into a dining room table. Units also boast oversize windows, lots of storage space, and an open kitchen (with a mini fridge, no stove and two induction burners).

It's difficult to know if the performance of micro-units is caused by their scarcity or whether demand for them actually exists.

But all of those features come at a price. As Dubinsky explains, "The cost to build micro units is higher than typical apartment buildings because there is more plumbing piping, HVAC equipment and piping, and there are more bathroom and kitchen fixtures per square foot of building."

As a result, Monadnock set the market-rate rents for Carmel Place at a higher price point: $2,540/month for a furnished apartment that measures 265 square feet; apartments currently on the market are asking as much as $2,952 for a similarly sized pad. (Its 14 affordable apartments start at $950.) Unsurprisingly, the developer was criticized for those prices, which can have a higher price per square foot than traditional apartments in more well-developed neighborhoods.

Still, Dubinsky argues the rent is lower than other new construction studios in the neighborhood, especially when you’re taking into account the cushy amenities package at offered by Ollie. Residents have access to a gym and lounge; they also have access to any work spaces, swimming pools or spas at other buildings with Ollie services. A live-in community manager helps organize potluck dinners, movie nights and day trips.

Despite the high rents, the demand was there for Carmel Place: 90 percent of the 55 units rented within two months of leasing, Dubinsky says. And the New Yorkers who have already dipped their toe into micro-housing remain confident. "If it seems like there’s been a lag [in micro development], it’s because some people were waiting for Carmel Place to open," explains Bledsoe. Now that’s it’s proved a success, he says, "The industry is just getting started."

How to Avert the Next Housing Crisis

View all stories in Longform