A celebration of all things small—from towns and tiny houses to micro apartments and modular furniture.

Rebecca and Greg Binns moved to New York City from Lake Tahoe, California, in 2006 with a plan: to land an apartment in Chelsea, with a garden, without breaking the bank every month. To friends they seemed naive ("Dream on," one told the couple), but after several false starts, the industrious couple found exactly what they were looking for: a Chelsea apartment with a spacious garden that could be theirs for less than $2,000 a month. The catch? The apartment is a studio—and a small one at that.

"I took one look at it and thought there was no way on earth we’d be able to fit in there," Greg says. That was more than ten years ago. Since then, the couple has completely transformed the space, maximizing its minuscule square footage with a few clever tiny home hacks.

Despite the studio’s pinched square footage—Rebecca insists it’s less than 400—the couple chose not to part with their king-sized mattress when moving in. Using carpentry skills learned from Rebecca’s father, a general contractor, and a little know-how, they built their own loft bed, accessed via a ladder. "It took a little getting used to at first," Greg says, "We definitely bumped our heads a few times in the beginning."

They found bottles from the 1800s, an old-fashioned outdoor toilet, the bones of a dog, and make-up dating to the 1950s.

There’s just enough space underneath the bed for a desk that doubles as a dining table. In the winter, Rebecca’s snowboard becomes an unofficial headboard, two feet from the ceiling.

Its adjoining outdoor space, which trumps the apartment in square footage, is also an essential part of the home for Rebecca and Greg. They think of it as their living room in the warmer months, but it’s taken a lot of work to get it there.

The yard was far from the bucolic respite they had hoped for when moving in. In the process of clearing it out—it took 60 Hefty bags in all—they found bottles from the 1800s, an old-fashioned outdoor toilet, the bones of a dog, and make-up dating to the 1950s.

What was originally intended as a weekend project to build a pergola turned into a three-month project. "We almost broke up three times over it," Rebecca recalls. But in the end the couple wrangled all of the yard’s odds and ends into a stunning sanctuary complete with a koi pond, fire pit, and outdoor grill punctuated by plants brought south via train from Greg’s mom’s house in Vermont. 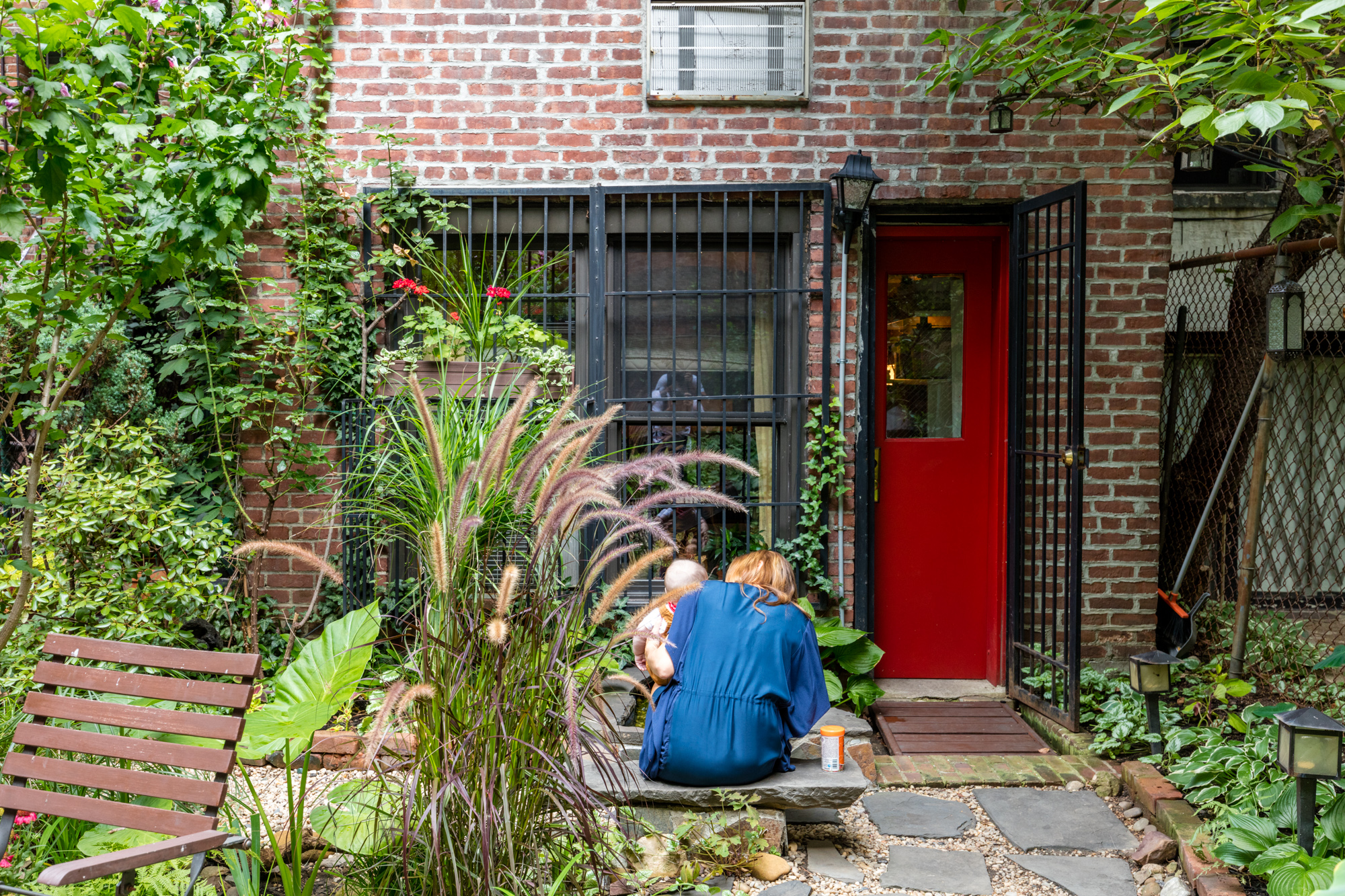 Though plowing through the yard work was rough, the couple would find no greater challenge—or joy—with the apartment than welcoming a baby into the mix. "All of a sudden life was happening," Rebecca says of when she found out they were pregnant. "We could have moved out but we got married instead." The two eloped in the Caribbean, and a few months later welcomed baby Huxley, now five months old. Their tiny Chelsea studio, barely large enough for two, was now home to three.

"I didn’t really get nervous about it," Rebecca says of making space for Huxley. "Babies hardly need anything in their first year." In the months since he arrived, so too has an Ikea shelving unit that holds all of his stuff. A bassinet is squeezed in under the loft. But as Huxley gets older, and bigger, the Binns are rethinking their lifestyle.

"I want him to have more space to learn to crawl and play with his toys," Rebecca says. The Binns are eyeing a move to the Flower District, where Rebecca notes she won’t have a garden, but will at least be able to walk by plants and flowers every day. "I’m going to miss the view of looking out onto a beautiful garden," she says, "My new view is not going to be this view. I’m going to miss waking up to the sound of birds."

"But we’ll have laundry in our apartment," Greg says of the new spot. "That’s going to be epic."