Originally built in 1907, the former Martha Washington Hotel has had many lives

At the turn of the 20th century, Midtown Manhattan became an important destination for luxury hotels. This was due in part to the area’s nearby bustling entertainment and retail districts, but also because of the area’s accessibility to subway and streetcar lines as well as the openings of Pennsylvania Station and Grand Central Terminal, which occurred within three years of one another.

Such grandiose hotels included McKim, Mead and White’s Hotel Imperial (1891), the Holland House (1891)—which was considered "one of the most opulent and luxurious hotels"—and the Waldorf Hotel (1893). Although these were all eventually demolished, there are several hotels that remain from this time, including the former Martha Washington Hotel, located in today’s trendy Nomad neighborhood. Despite not having the cache of its aforementioned neighbors, this historic hotel holds a unique distinction: it was the first hotel built in New York City to provide lodging exclusively for professional women.

The Martha Washington Hotel was sponsored and developed by the Women’s Hotel Company, which was founded in 1897 to build "high grade hotels for the exclusive accommodation of business and professional women." Despite construction delays due to the Spanish American War, by 1899 there was enough funding in place to commence construction, namely from such high-profile investors as John D. Rockefeller, William Schermerhorn, Mrs. Russell Sage and Helen Gould, the daughter of railroad magnate Jay Gould. 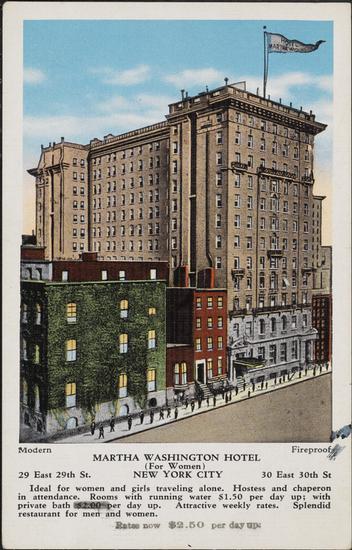 Per the NYC LPC designation report, "by the time the hotel opened, much of the stock in the company was owned by individual women who supported the idea of a women’s hotel." In 1901, the company purchased two through lots on East 29th and East 30th Streets to be the site for their new hotel which would "meet all the demands of exacting womankind."

The Women’s Hotel, as it was originally known, was constructed from 1901 to 1903 by acclaimed British-born architect Robert W. Gibson, who won a competition for this commission. Designed in the Renaissance Revival Style, the hotel was 12 stories tall and featured trademark ornamental details of the style, such as "quoins, lintels detailed with keystones or pediments, rustication, brackets and dentils." According to the LPC designation, Gibson used these elements on both facades (which were near identical), "giving the building a distinctive presence in the busy mid-town hotel district in which it was constructed."

At the time of its opening, the hotel was fully occupied with permanent and transient guests, with a sizable waiting list. The hotel contained single rooms and apartments (416 in total), along with a library, reception rooms on each floor, a roof promenade and a private dining room as well as a separate restaurant open to the public. The hotel also featured amenities specifically suited for women, such as "a drug store, ladies’ tailor shop and millinery store, a manicurist and chiropodist, a ladies’ shoe polishing parlor, and a newspaper stand."

One of the many articles written about the hotel noted that the hotel was typically frequented by "teachers, bookkeepers, stenographers, musicians, artists, writers, nurses, physicians and other professional women." In addition to hosting women, the hotel also hosted organizations of importance to women; in 1907, the hotel served as the headquarters for the Interurban Women’s Suffrage Council.

In 1920, the hotel was purchased by the Martha Washington Hotel Corporation, giving the hotel the name it would come to be known by. Through the years, the hotel hosted a number of famous women, including poet Sara Teasdale, actress Louise Brooks, and Louise E. Dew, a writer and lecturer who edited the Ladies’ World publication. Despite changes in societal attitudes and the feminist movement, the hotel would continue to serve only women until 1998.

In recent years, it’s gone through a number of different owners and name changes: It became the Hotel Thirty Thirty (2003), Hotel Lola (2011), King & Grove New York (2013) and in the spirit of history, would be once again known as the Martha Washington Hotel in 2014.

In 2015, the hotel was purchased by the CIM Group for $158 million and was rebranded as the posh Redbury New York Hotel in 2016. Given the fate of many of the hotel’s close predecessors, we are fortunate to have this great and historic hotel still standing—albeit now serving a very different clientele within a very different New York City.

Next Up In Curbed Classics