Courtney Duffey is just one example of a recent college graduate who moves to the big city for a new opportunity. Having never been to New York City before, the University of Michigan grad landed in Manhattan in 2014 with just two days to find an apartment. She didn’t expect to end up in a roughly 225-square-foot studio, but over time, she has made the space her own.

During her apartment search, Duffey experienced both size and sticker shock over New York's rental offerings. "After my first day of searching, I wanted to call my mom in tears like, I don’t think I can downsize my life like this and pay this much for rent," she says. But after scoping out a promising Craigslist posting in Midtown East, she decided to check out the space. "I walked in and was like, this is it, I’m done with my search," she says.

The idea of moving into a small space proved to be much worse than the reality. After all, the Kentucky native was coming from spending years living in a dormitory with as many as five roommates. She didn’t have too much stuff to lug along the way and despite the apartment’s size, Duffey was happy to find herself finally living roommate-free.

Crafting pieces to make the compact apartment more comfortable was key; luckily, Duffey's boyfriend, Chris Sterry, is a carpenter who specializes in high-end home renovations. They met thanks to Duffey's job at Baxt Ingui Architects, which has contracted Sterry for a number of projects. Together, they have slowly renovated the space into a practical one, characterized to their likings. 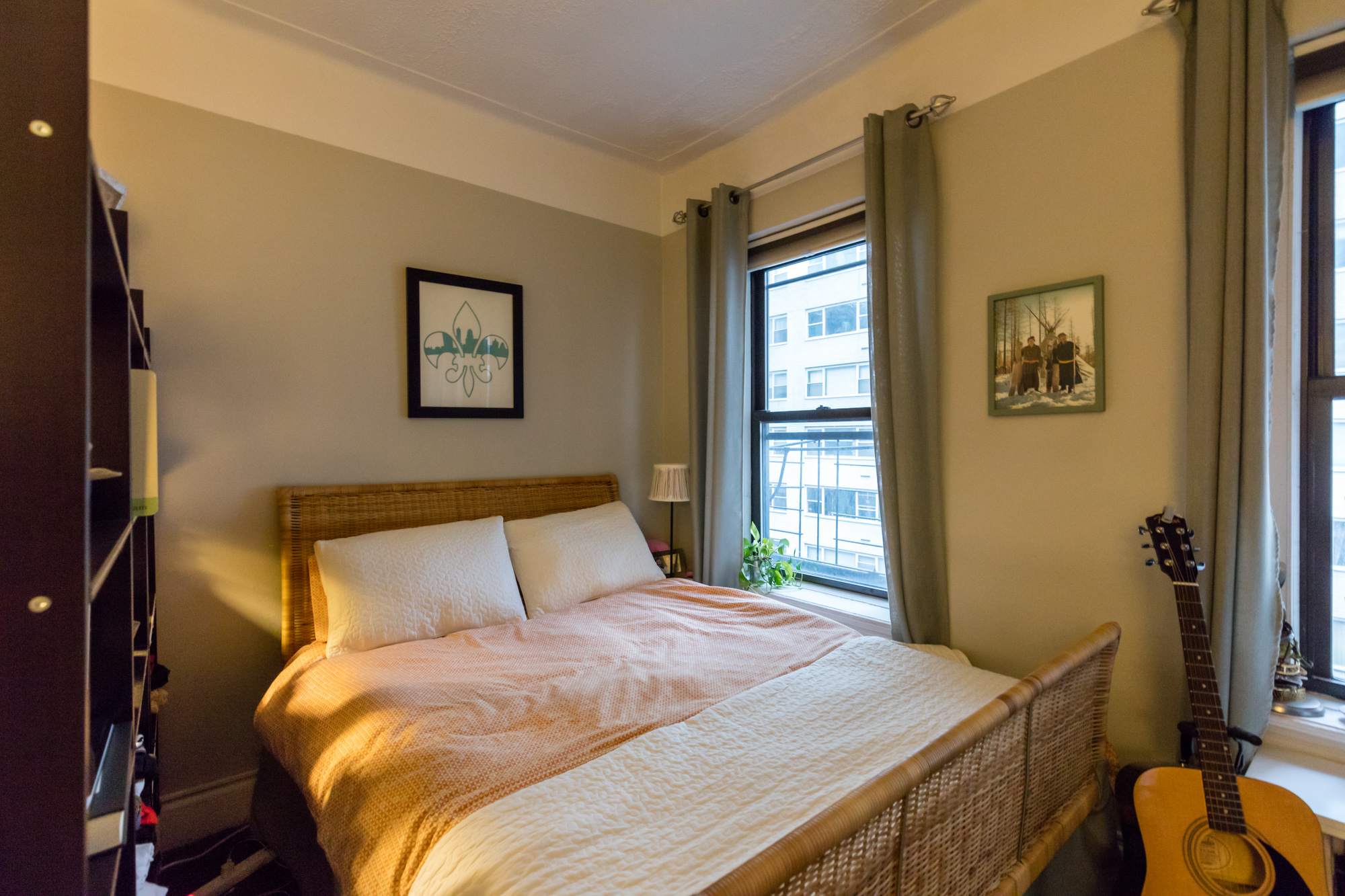 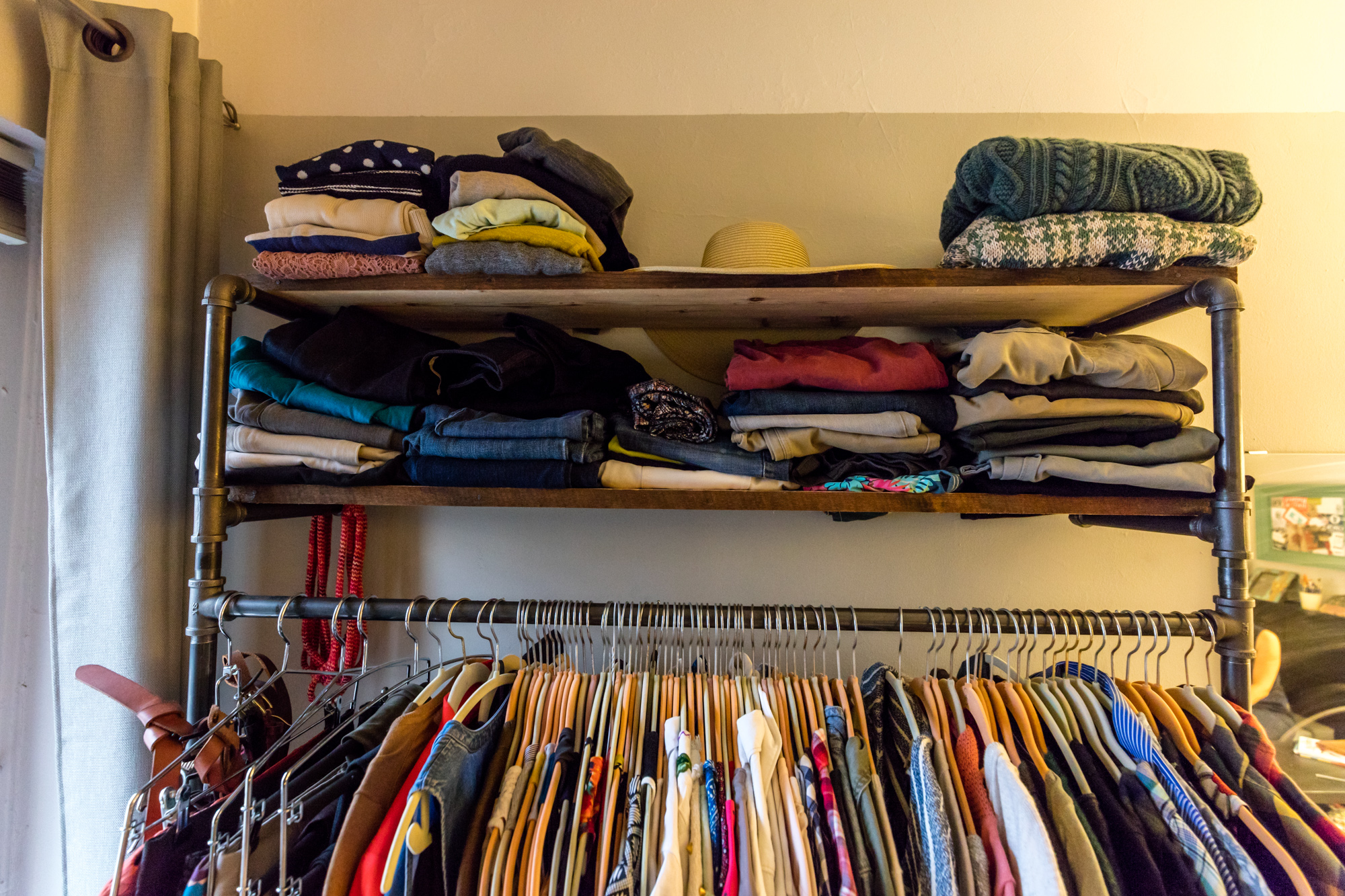 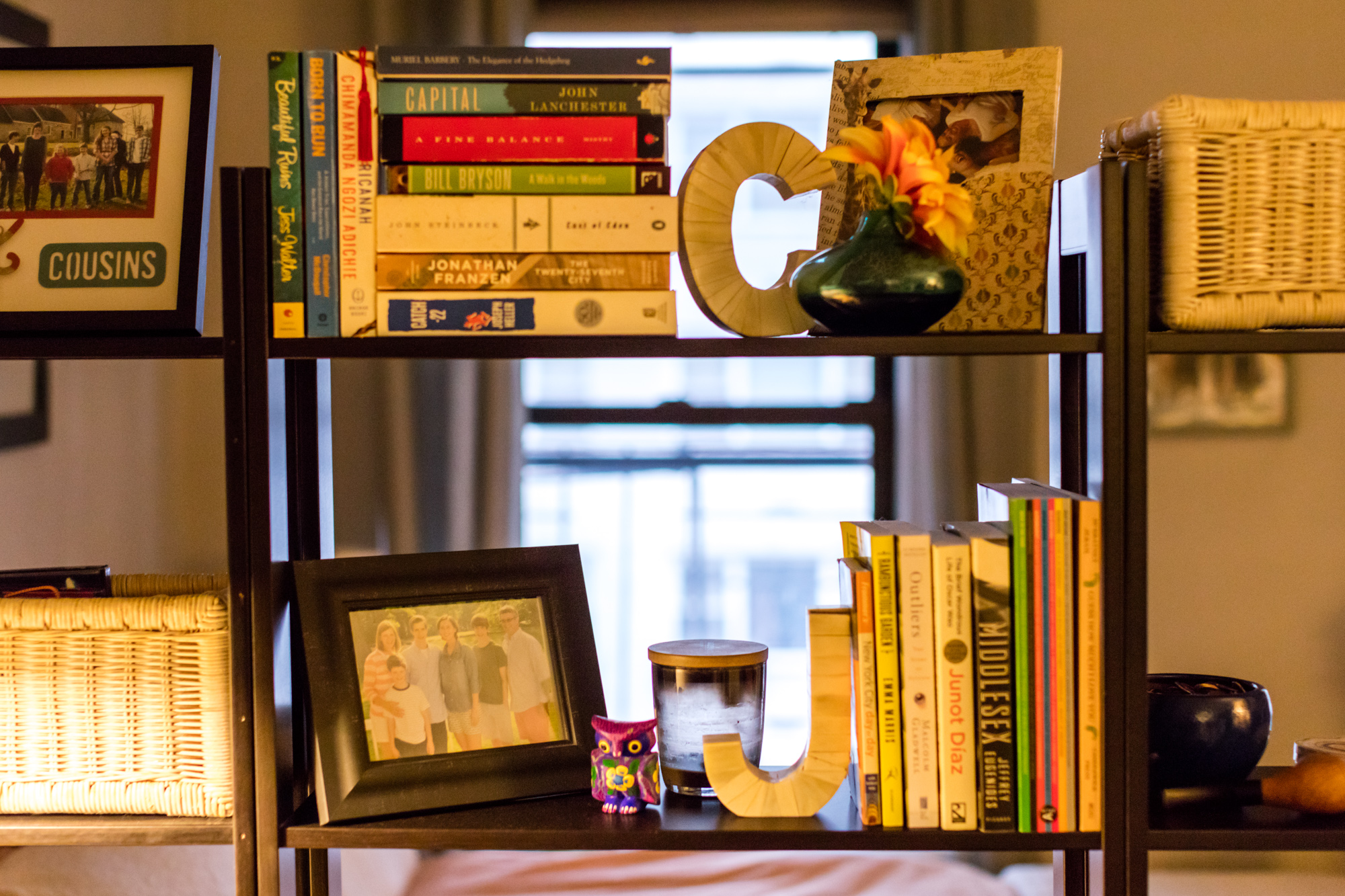 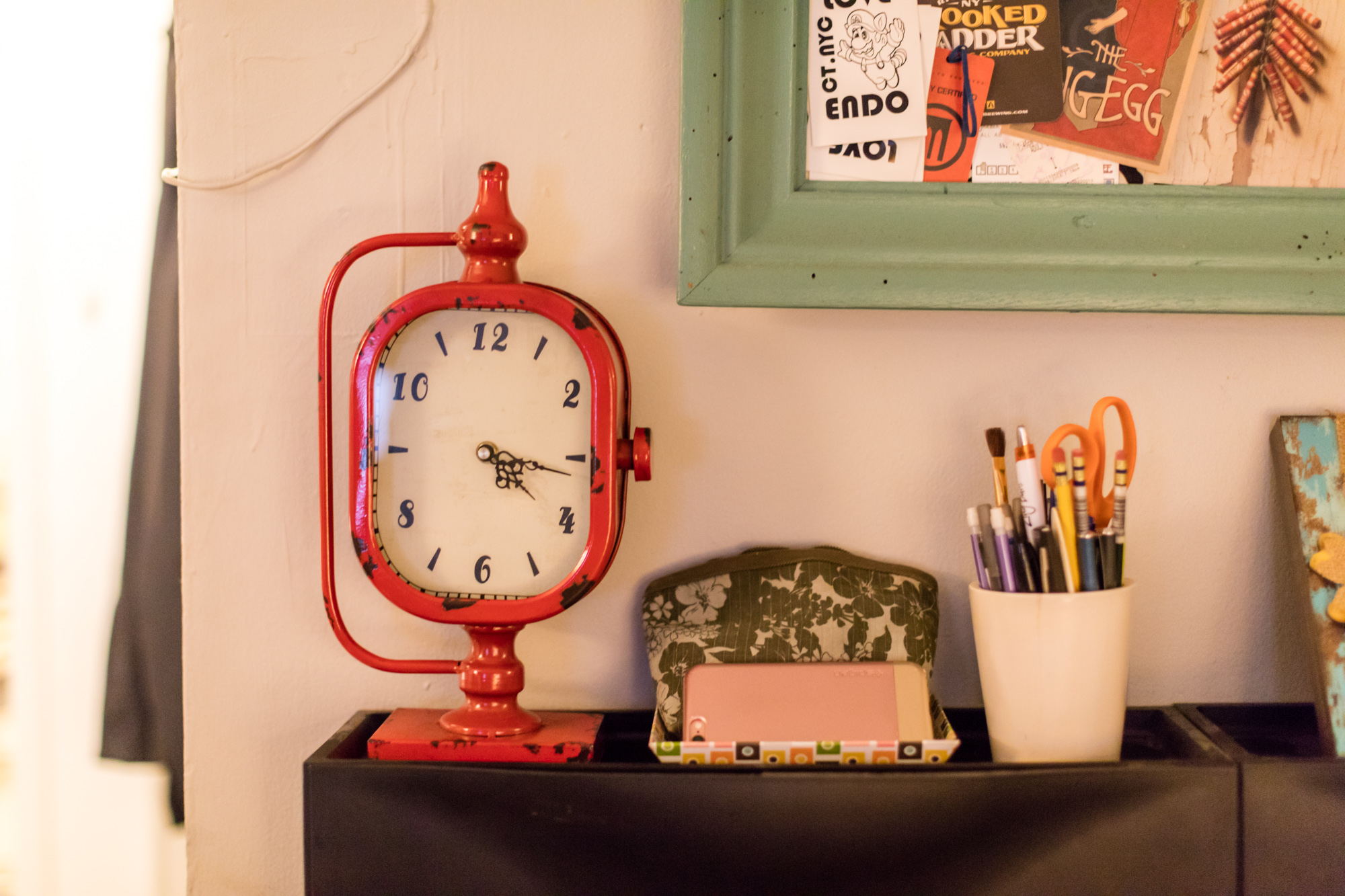 The two hashed out a few DIY projects that would mitigate the apartment’s lack of space. The first was coming up with a better storage solution for clothing. A stand-alone clothing rack had outlived its usefulness and needed to be replaced. "We were in the mood for a craft and I’ve always really liked industrial-looking shelving systems," she explains. They created a wall-mounted clothing rack using essentials from Home Depot along with wood Sterry sourced from the joist of an old Carroll Gardens townhouse.

When it came time to buy furniture, Duffey did what many people who are just starting out do: she headed to Ikea. In fact, the majority of her furnishings come from the budget-friendly chain, with the exception of some quirky pieces found at garage sales, like the $10 wicker bed frame her mom scored for her. "My mom has a lot of influence on the design," she jokes.

Editor markup for Midtown East Micro House Call. This is only visible in the story editor.

Since moving in, Duffey has seized every opportunity to reinvent her space, whether it’s repurposing an old frame and some chicken wire into an accessory storage board, or encouraging Sterry to build more of his hand-carved wooden pieces. Constantly tapping into their crafty sides keeps them looking on the bright side of things. "Some people are always waiting to settle down and don’t want to put any effort, time, or money into where they’re living now," Duffey explains. "But every place you live is going to be different and it’s fun to make it your own." 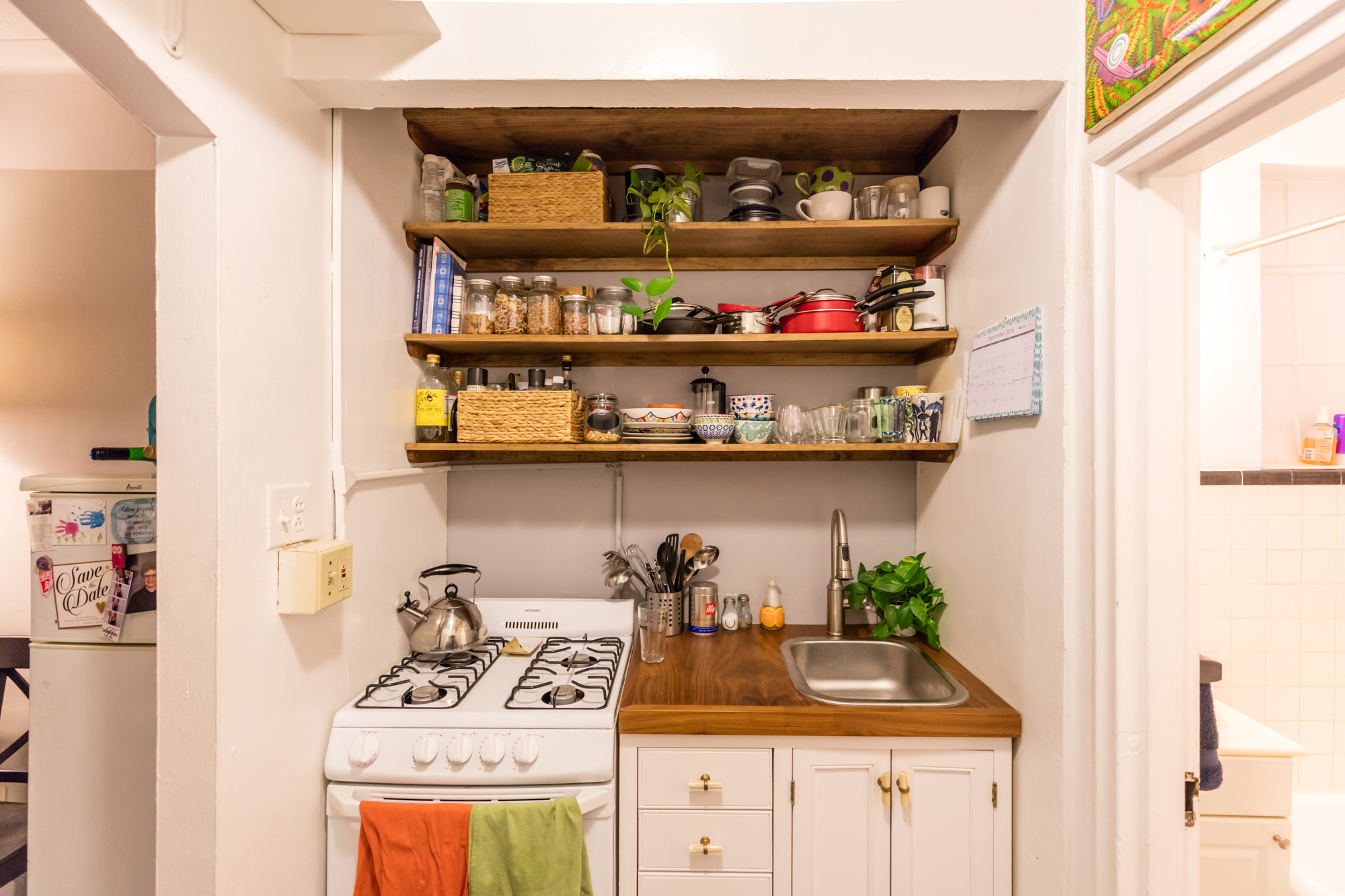 Their latest project, a revamp of the small kitchenette, is by far their favorite. Ditching closed melamine cabinets and a dated laminate countertop for open shelves forces them to keep things orderly. There was also an annoying four-inch gap between the sink and stove, and with just 11 total inches of counter space, they needed to reclaim that space. Sterry constructed and installed a new counter, made from an old dining room table that someone had given him, and added a toe-kick drawer for "storage that makes sense," Duffey says.

Of course, there are still a number of challenges with living in such a small space—including constant cleaning to keep things from appearing cluttered. And Sterry is slowly moving items from his 700+ square foot apartment in Kew Gardens into the studio. But Duffey recently renewed her lease for the second time because she has yet to find another apartment at a better price and location in a larger space. (It helps that the building is rent-stabilized and Duffey likes her neighbors.)

While she doesn’t plan on living in the micro apartment forever, Duffey is happy with what she and Sterry have created. They still invite as many as five friends over at a time for weekend stays as if it were a full-sized apartment (the Ikea couch has a pull-out bed). But still, there are days when living in a fifth-floor walk-up sucks. "I found that if I read mail while walking up the stairs, it’s easier."