It's often said that the only constant in New York is constant change, and looking through historic photos of the city—even photos from just 20 years ago—proves how true that really is. New Yorkers love waxing poetic about the good ol' days and lamenting the loss of history, and there’s an app that allows users to tap into that nostalgia and time travel.

Called Deja Vu, the app holds a collection of hundreds of vintage photographs that have been geolocated, so you can stand on a street corner and pull up a photo of that same spot from 100 years ago. The app's creator, E J Kalafarski, aims for historic scenes that "illustrate particularly stark contrasts with today," and photographer Scott Lynch set out to recreate 15 of the shots. 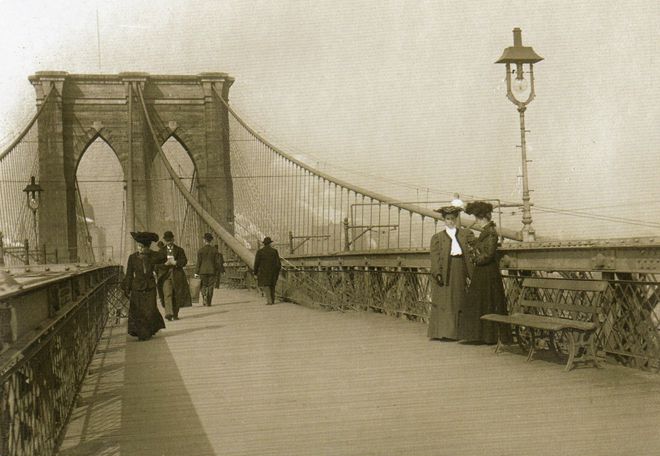 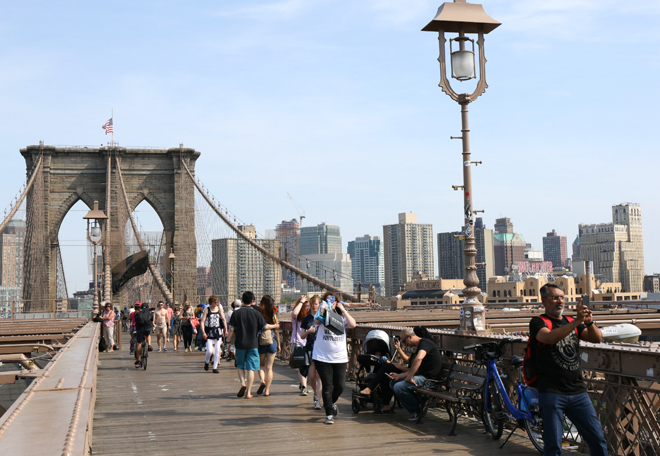 ↑ First up, the Brooklyn Bridge walkway, in 1907. The bridge—even the lamppost—looks exactly the same, but the Brooklyn skyline certainly does not.

↑ In 1950, the High Line was still functioning as a railway. Here, a train pulls into the factory of the National Biscuit Company.

↑ The land around St. Mark's Church-in-the-Bowery was still very pastoral-looking in 1840. Today, the landmarked church sits at a 45-degree angle to the street because it was built prior to the grid system of streets.

↑ Chinatown was still Chinatown 100 years ago, but the buildings on Doyers Street are completely different these days. However, the street's 90-degree bend is still easily recognizable.

↑ In 1908, the Manhattan Bridge was under construction. Today, this view in Dumbo is nearly identical, though there are dozens more tourists today than back at the turn of the 20th century.

↑ The Flatiron Building under construction in 1902, when it was only one of two skyscrapers north of 14th Street. The landmarked structure hasn't changed, but it's no longer the tallest building in the area.

↑ In 1915, the corner shop on the Flatiron Building was used as a battleship-shaped recruiting station during World War I.

↑ Brooklyn Bridge Park now occupies the land beneath the Manhattan Bridge, but in 1937, an oyster shack sat at its base in Dumbo. That massive pile? Oyster shells.

↑ This old photo, taken in 1918, is impossible to recreate today, as the Helmsey Building sits on the property. The 1918 photo shows Victory Plaza, which was created on Park Avenue north of Grand Central between 45th and 50th Streets. The pyramid is made of thousands of captured German helmets.

↑ Inside Grand Central, little has changed. This photo shows a Redstone missile in the terminal in 1957. In the aftermath of Sputnik, the Army displayed the ballistic missile to ease American fears about U.S. space capabilities. A hole remains in the ceiling today near the constellation Pisces where an anchor bold was placed to hold the rocket.

↑ In late 1941, the giant photo mural on the left was erected in Grand Central Terminal. The Farm Security Administration placed the mural over an entire wall to promote the sale of defense bonds during World War II.

↑ Union Square is much leafier today than it was in 1917, when the U.S. Navy constructed a battleship in the park.

↑ In 1910, immigrants wait outside the main building on Ellis island, which has hardly changed.

↑ Today's version of One Times Square is much glassier and LED-bedazzled than the original, seen here under construction in 1903.