A big planter is out, but changes on the Broadway side of the building remain

Changes to the public plaza in front of Skimore, Owings & Merill’s 140 Broadway (aka the Marine Midland Building) are on the horizon, but the extent of those changes may not be as great as previously feared. Back in January, the owners of the building unveiled a redesign for the open space, notably the addition of new, circular planters, as well as changes to the Broadway side that would discourage food vendors from setting up shop there.

But after sharp criticism of the plan from preservationists and architecture buffs, the firms working on the redesign, NV5 and Higgins Quasebarth & Partners—on the landscape and historic elements, respectively—pivoted. They’ve now unveiled a slightly revised proposal (PDF!), which will be discussed at the Landmarks Preservation Commission’s next meeting on March 20. (The LPC has previously declined to discuss the proposal at a February meeting.)

According to the Architect’s Newspaper, which first reported the news, most of the changes from the original proposal are subtle; the biggest “eliminates a 14-foot-wide planter at Broadway and Cedar Street that would have sat kitty-corner from the plaza’s signature sculpture, Isamu Noguchi’s Red Cube,” per AN. The plans call for adding smaller circular planters on the Cedar Street side of the plaza—which is similar to SOM’s original design—along with bollards. 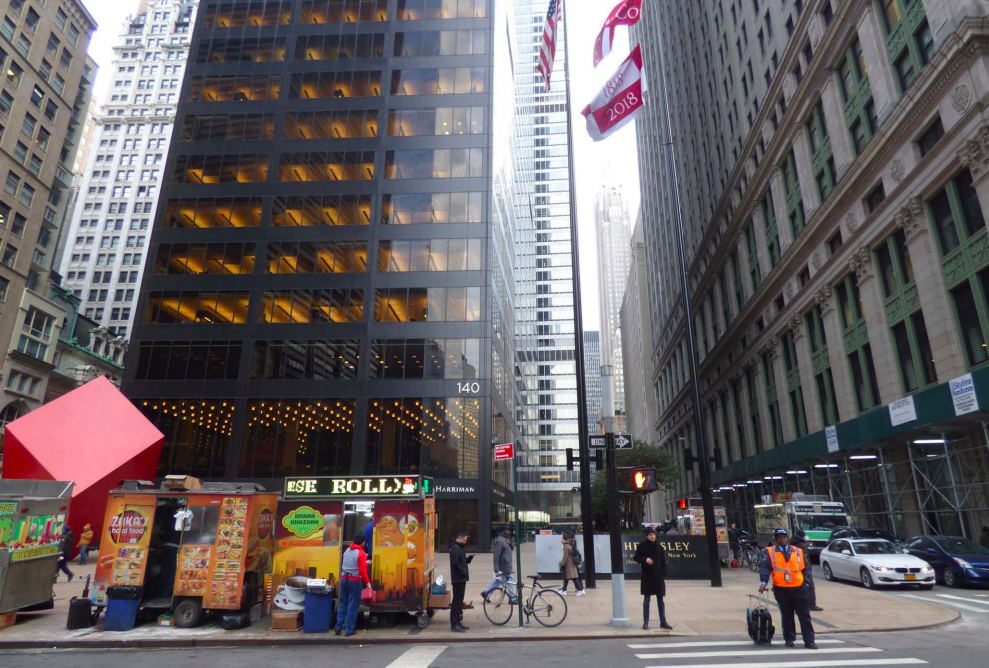 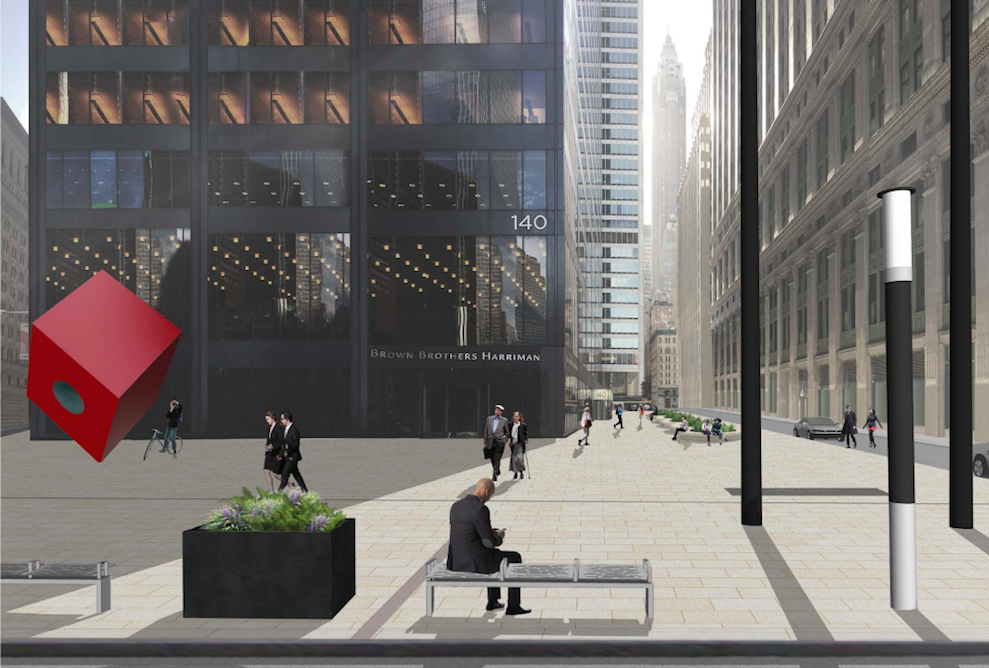 One thing that hasn’t changed: The addition of benches (from the renderings, the hard metal kind that don’t allow for comfortable sitting—or, perhaps more importantly, dozing off) and rectangular planters on the Broadway side of the plaza, which is intended to discourage food trucks that have set up shop there. The designers for the space, Jackson Wandres of NV5 and Erin Rulli of Higgins Quasebarth, defended this decision to AN:

By obstructing the historical plaza-to-plaza vista, “the carts have caused a dramatic shift in how you experience the space,” Rulli said. “It’s not the intention to deprive anyone of their livelihoods, but rather, it’s a design move for the benefit of the plaza,” Wandres added.

In a statement provided to Curbed, a DOT spokesperson said that, “DOT has directed the petitioner to revise the original proposal, which would have permanently displaced all vendors on Broadway with benches and planters. The revised design aims to strike a balance to include vendors, planters and benches while also maximizing views of the Noguchi Cube from directly across Broadway and on diagonals through each corner. Benches and planters are proposed toward each corner, and space for 3 vendors would be reserved in the center of the block.”

Curbed’s architecture critic, Alexandra Lange, still objects to those changes. “It is obnoxious and the vendors go home at night,” she says. “Those giant blocky planters don’t even go with the round ones on Cedar.”

The LPC will hear from the designers—and from the public—during its meeting on March 20.