When Major Food Group opened the Pool, one of two restaurants operating in the former Four Seasons Restaurant at the iconic Seagram Building, the food wasn’t the only thing that garnered attention.

The operators, with the blessing of building owner RFR Holdings (the firm owned by developer Aby Rosen), made changes to the iconic Philip Johnson-designed interiors without seeking the approval of the Landmarks Preservation Commission—a major oversight, considering the dining room is one of the city’s few interior landmarks. Those changes included adding a reception desk to the lower level of the restaurant (where one had never existed), and changing the wall coverings and adding a bar to a mezzanine that’s now known as the Pool Lounge.

Those changes, and the manner in which they were made, prompted a swift backlash. When they were finally presented to the LPC in September 2017, one commissioner said the new desk in the lobby gave the space—previously occupied by building architect Mies van der Rohe’s iconic Barcelona chairs—“all the exuberance of a funeral home.”

Ultimately, RFR was asked to come back with a revised design for the space—and two years later the company was finally ready to present those revisions to the LPC. At a meeting on Tuesday morning, representatives from MdeAS Architects, which was tasked with correcting those contested alterations, presented its revisions; the LPC ultimately voted to approve them, with six commissioners voting for, and three against.

MdeAS principal Dan Shannon said that the revised proposal was intended to “bring back the total design concept” of van der Rohe and Johnson. The contested wall coverings, which were initially a dark gray, would instead be rendered in a more neutral color with bronze and walnuts accents—a palette more closely aligned with the space’s previous iteration. The bar, which was initially clad in a quite ostentatious mother of pearl, would be covered in brown leather intended to match the bar in the Grill, the space’s other restaurant. These changes were accepted by many of the LPC commissioners without complaint. 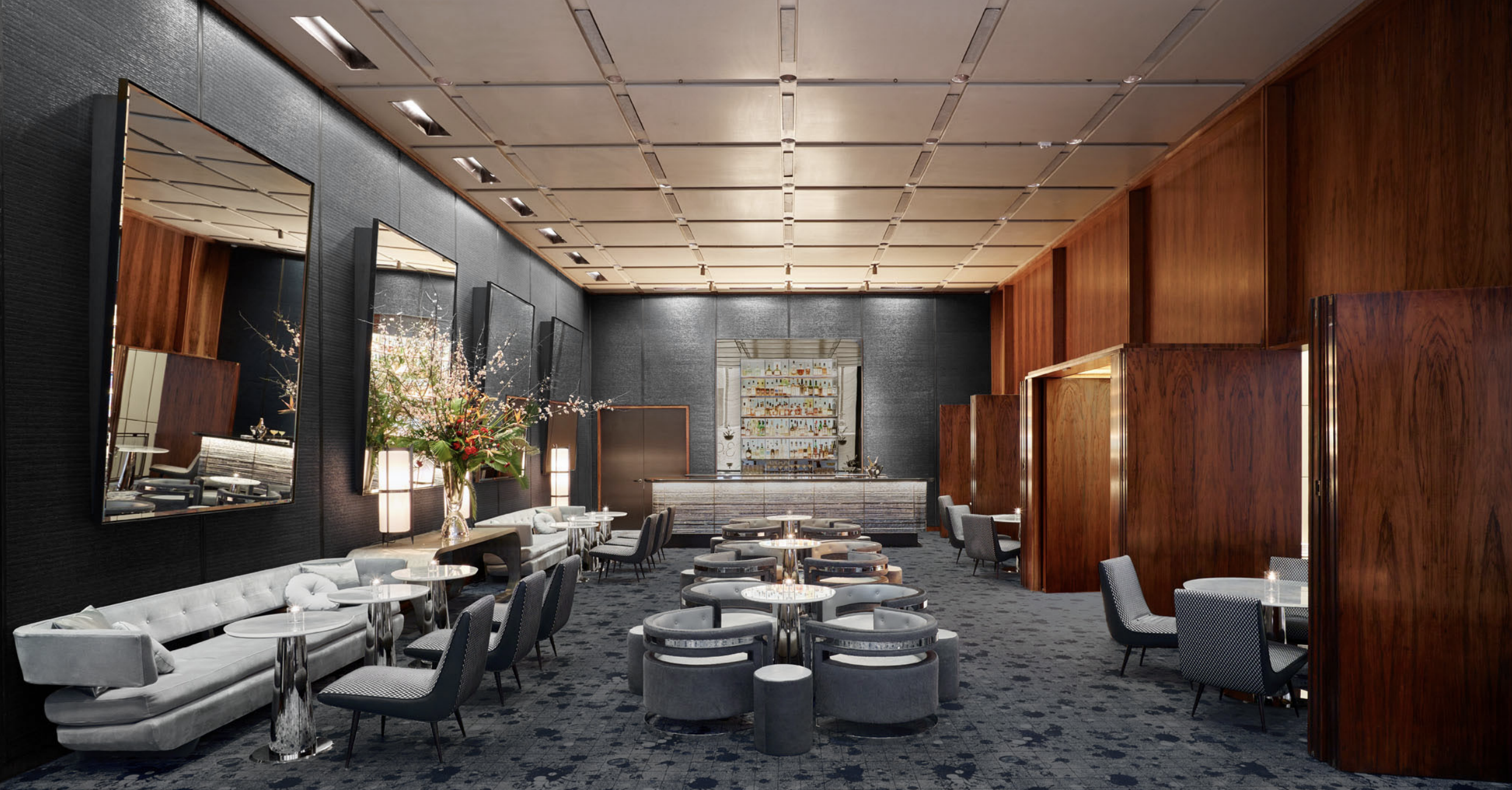 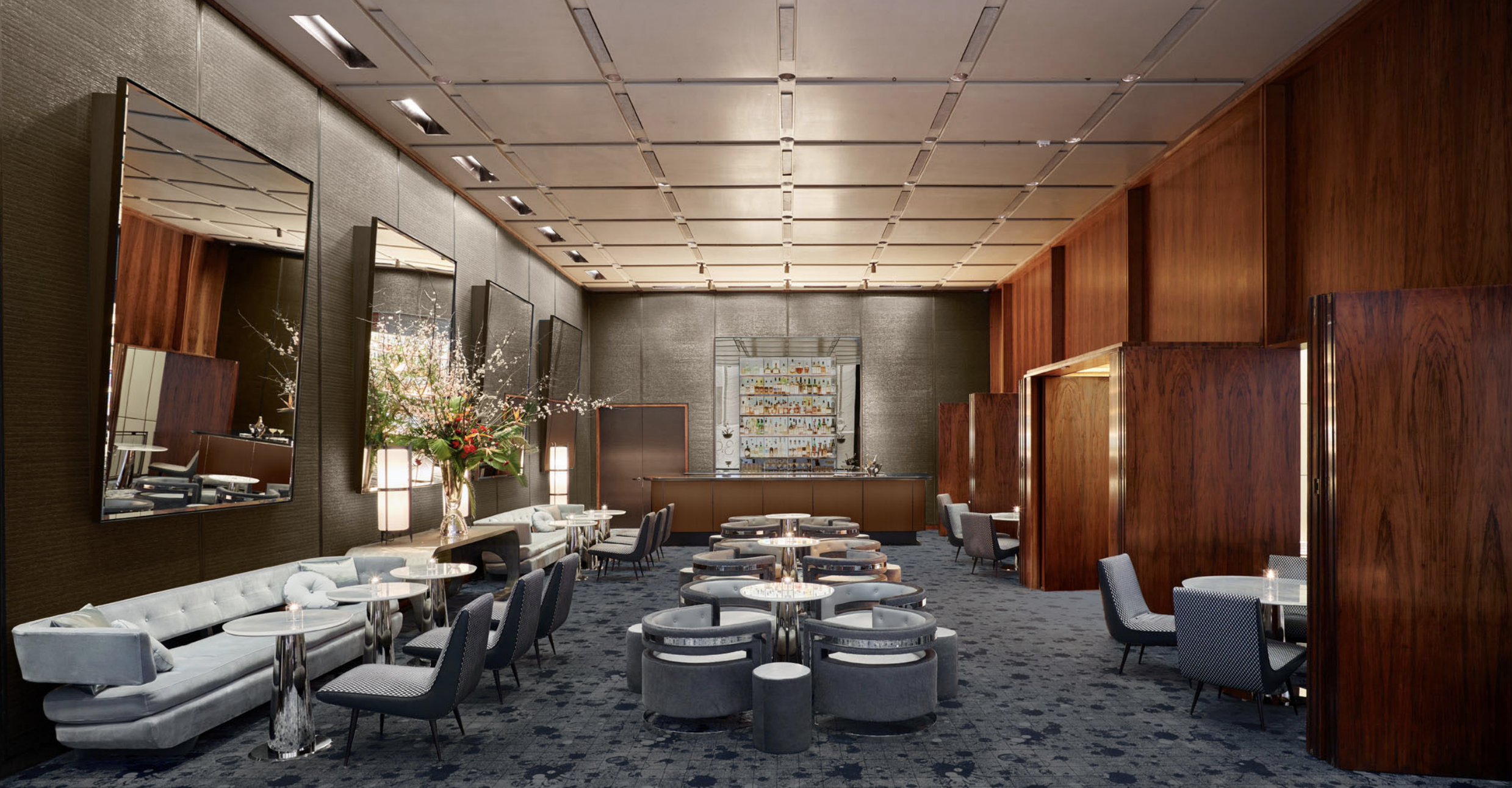 The current Pool Lounge on the left, and MdeAS’s proposed changes on the right.

The biggest point of contention was the addition of a reception desk on the lower level of the restaurant, which previously had functioned as a space for coat check and little else. Now, as MdeAS’s Shannon put it, it’s the “nerve center” of Major Food Group’s whole operation, where reservations for the five discrete bars and restaurants are made and patrons are escorted to their tables. In deference to the LPC’s previous suggestions, they shaved two feet off the length of the desk (which is currently 10 feet long) and shrunk it in other ways, to respect the “space, scale, and volume” of the entryway.

That still did not satisfy many of the commissioners. “I don’t buy the necessity of that desk,” John Gustafsson, board chairman of the Historic House Trust of New York City, said. “I’m not there on the desk at all.”

But ultimately, what seemed to trouble commissioners the most is the way in which the changes were made—“they just said, screw the Landmarks Commission?”, as Michael Devonshire, an architectural conservator with Jan Hird Pokorny Associates, Inc. put it.

Devonshire also said it was “galling” and “shameful” that RFR circumvented the LPC to make these changes in the first place, particularly given its history in front of the commission. “I find it completely despicable that an applicant who knows better—who absolutely knows better—goes ahead and makes changes like this in a space … that they know is regulated by the LPC,” he said.

Ultimately, however, a majority of commissioners voted to approve the modifications, with three voting against. RFR declined to comment on the decision.