Rockefeller Center’s public plaza could get a major revamp

Under a new proposal, the complex’s center would get new stairs and elevators to improve visitor circulation

Rockefeller Center, one of New York City’s most iconic landmarks, may get a major facelift.

Tishman Speyer, the complex’s owner, has proposed several changes as part of a plan conceived by Gabellini Sheppard Associates, which was presented during a Landmarks Preservation Commission hearing this week. The proposal calls for fixes to the channel gardens (near the Fifth Avenue entrance, in between the shops), the sunken plaza (its stair, storefronts, and landscape, among other things), the north and south garden stairs, and the Rockefeller Plaza street bed, all in the name of improving circulation throughout the complex and enhancing its public areas.

Changes to the channel gardens would include adding reflective, translucent glass blocks to its six pools, allowing light to pass through and letting visitors see through to the concourse below. The proposal also suggests relocating the “Credo” monument from the sunken plaza stairs to the garden’s Fifth Avenue entrance.

It also calls for reducing the size of the stone parapet in the sunken plaza staircase and adding permanent bronze railings with greenery, as well as removable ones that would be installed temporarily during the summer months. That’s the way the stairs were set up when the complex opened in the 1930s; the plaza served as an entrance to shops before it was turned into a dining area and the famed ice-skating rink. 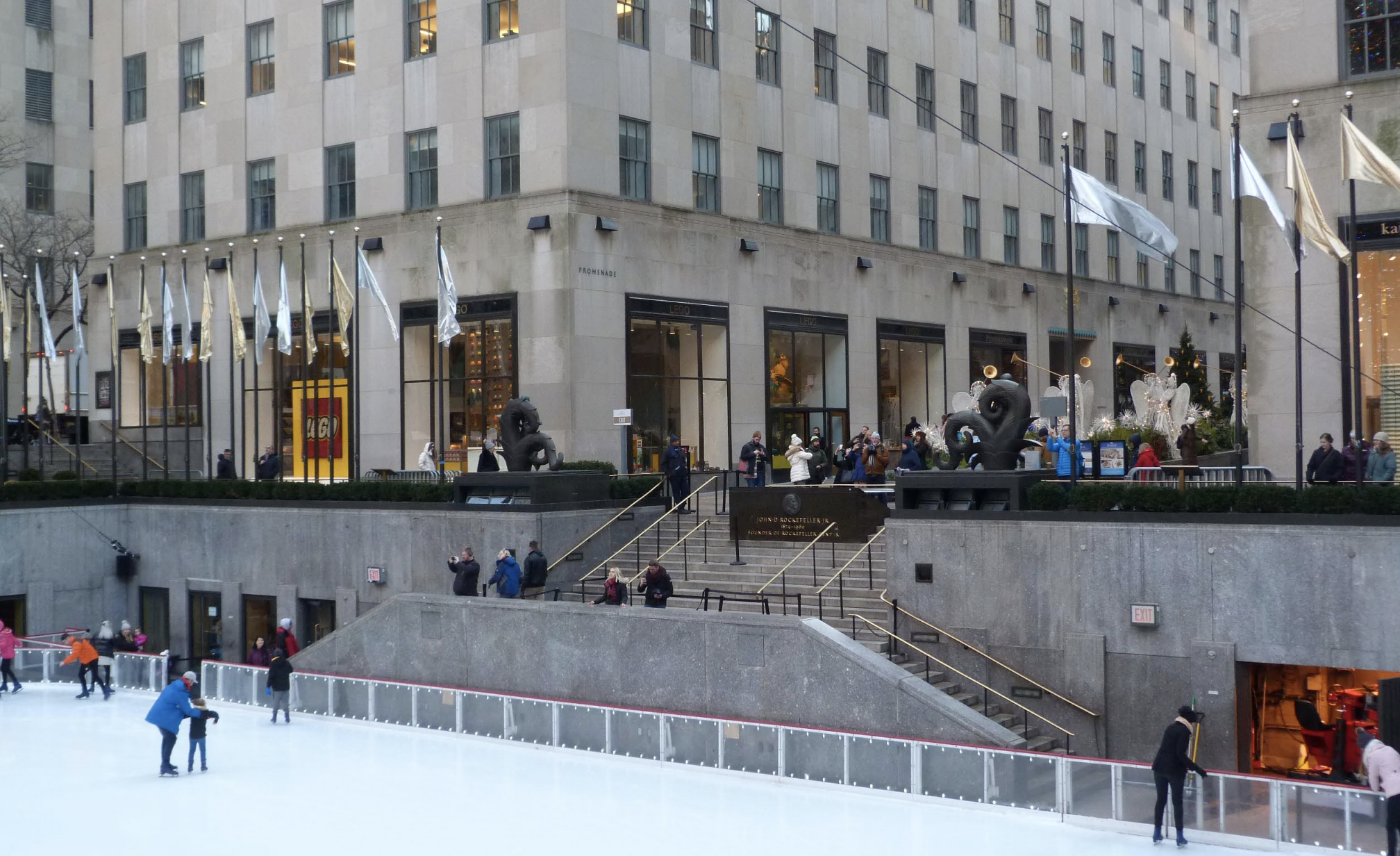 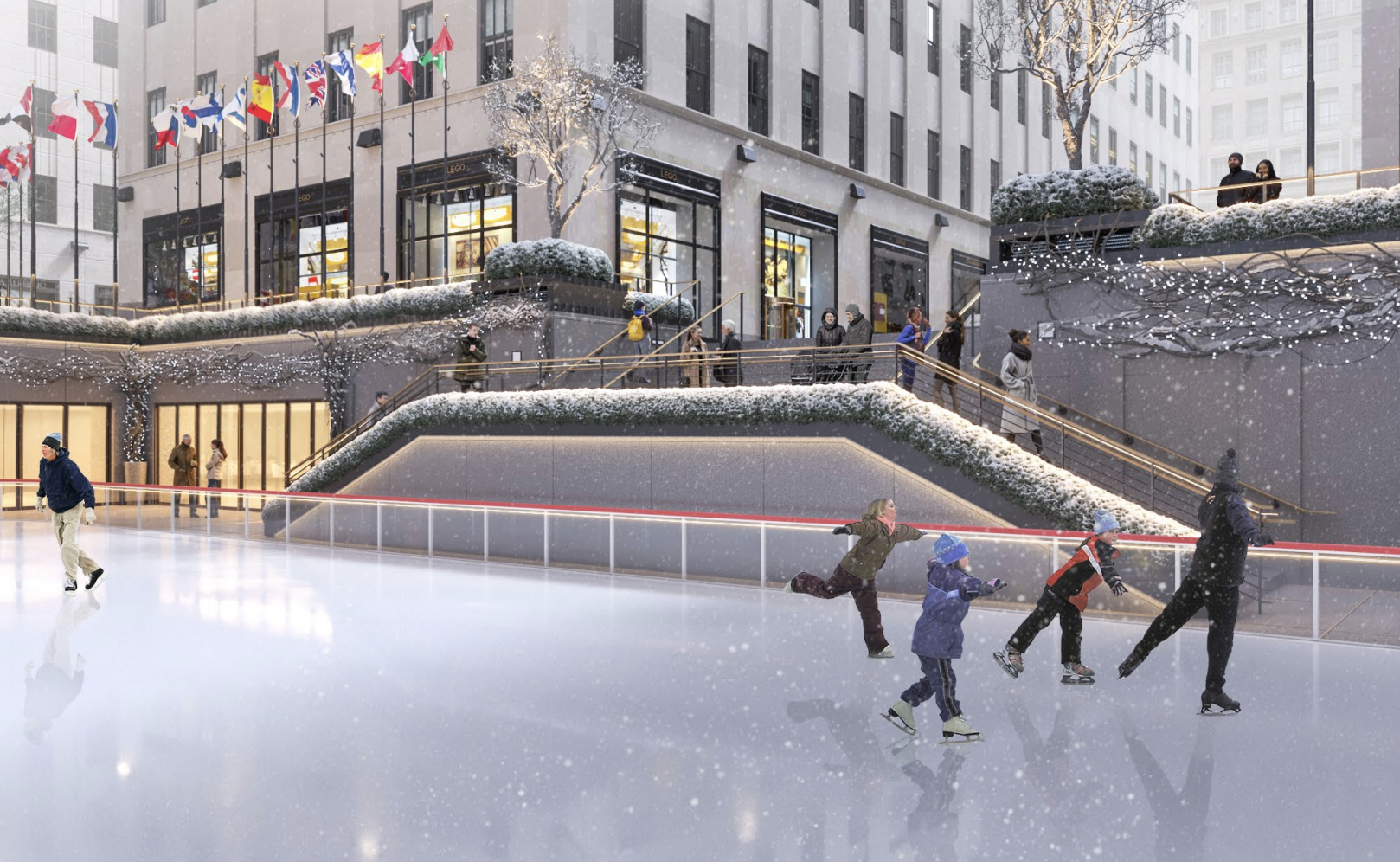 What the sunken plaza stairs would look like in the winter.

The proposal also calls for moving the “Youth” and “Maiden” statues from the top of the sunken plaza stairs to either side of the Prometheus statue, where they were originally located, as well as removing the elevators in the north and south gardens and replacing them with new elevators made of glass and bronze-painted metal. The glass could display digital images or “media art.”

But the proposed digital displays are the biggest concern for some preservationists.

“The line between media art and advertising is subject to interpretation,” Christabel Gough, of the Society for the Architecture of the City, a historic preservation advocacy group, said during the hearing. “Let Times Square be Times Square, and let Rockefeller Center be Rockefeller Center. A billboard that can wiggle would be a huge distraction here, and just when the summer garden is being made so much nicer, it would strike a completely false note.”

In November, Manhattan’s Community Board 5 voted to approve the application, but with caveats. In its resolution, the board asked the designers to reconsider the glass side panels proposed for the north and south gardens, which are “modern and non-contextual with the landmark,” and the proposed “bulky” elevators that block views of the terrace and include an “intrusive overhanging canopy.”

At the hearing on Tuesday, the LPC didn’t make a final decision on the changes. Sarah Carroll, the commission’s chair, said there would be a future session to continue discussing the plan but it is unclear when it will take place.

Next Up In News